Marcus Tullius Cicero was a Roman statesman, orator, lawyer and philosopher, who served as consul in the year 63 BC. He came from a wealthy municipal family of the Roman equestrian order, and is considered one of Rome’s greatest orators and prose stylists. Take a look below for 30 more interesting and awesome facts about Cicero.

1. His influence on the Latin language was so immense that the subsequent history of prose, not only in Latin but in European languages up to the 19th century, was said to be either a reaction against or a return to his style.

2. According to Michael Grant, “the influence of Cicero upon the history of European literature and ideas greatly exceeds that of any other prose writer in any language.”

3. Cicero introduced the Romans to the chief schools of Greek philosophy and created a Latin philosophical vocabulary, distinguishing himself as a translator and philosopher.

4. Though he was an accomplished orator and successful lawyer, Cicero believed his political career was his most important achievement.

5. It was during his consulship that the second Catilinarian conspiracy attempted to overthrow the government through an attack on the city by outside forces, and Cicero suppressed the revolt by summarily and controversially executing five conspirators. 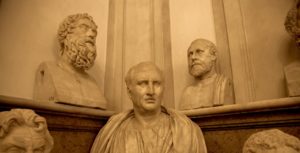 6. During the chaotic latter half of the first century BC marked by civil wars and the dictatorship of Gaius Julius Caesar, Cicero championed a return to the traditional republican government.

7. Following Julius Caesar’s death, Cicero became an enemy of Mark Antony in the ensuing power struggle, attacking him in a series of speeches.

8. He was proscribed as an enemy of the state by the Second Triumvirate and consequently executed by soldiers operating on their behalf in 43 BC after having been intercepted during an attempted flight from the Italian peninsula.

9. His severed hands and head were then, as a final revenge of Mark Antony, displayed in the Roman Forum. 11. The peak of Cicero’s authority and prestige came during the 18th century Enlightenment, and his impact on leading Enlightenment thinkers and political theorists such as John Locke, David Hume, Montesquieu and Edmund Burke was substantial.

12. His works rank among the most influential in European culture, and today still constitutes one of the most important bodies of primary material for the writing and revision of Roman history, especially the last days of the Roman Republic.

13. His slave, Marcus Tullius Tiro, served as his secretary and is credited with inventing an early form of shorthand.

14. Tiro wrote a multi-volume biography of Cicero, although it’s been lost to time.

15. While serving as quaestor in Sicily, Cicero discovered the tomb of the mathematician and scientist Archimedes, 137 years after his death. It’s whereabouts today are unknown.

16. In order to finance his political ambitions, he married Terentia at the age of 27. Terentia was from a wealthy, noble family, but even though it was a marriage of convenience, it lasted for 30 years, with Terentia taking an active interest in Cicero’s affairs.

17. He was deeply suspicious of Julius Caesar, whom he regarded as a tyrant.

18. Although he played no part in Caesar’s assassination, Brutus called out Cicero’s name as he raised his dagger, and Cicero later wrote to one of the conspirators, “How I could wish that you had invited me to that most glorious banquet on the Ides of March!”

19. When he was hunted down and killed by Mark Antony’s soldiers, he didn’t offer any resistance and his last words were alleged to be, “There is nothing proper about what you are doing, soldier, but do try to kill me properly.” 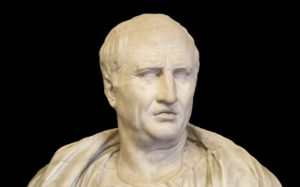 20. In Formia, two Roman-era ruins are popularly believed to be Cicero’s mausoleum, the Tomba de Cicerone, and the villa where he was assassinated in 43 BC.

21. Cicero’s supposed tomb is a 24 meter, or 79 feet, tall tower on an opus quadratum base on the ancient Via Appia outside of Formia.

22. In Pompeii, a large villa excavated in the mid 18th century just outside the Herculaneum Gate was widely believed to have been Cicero’s, who was known to have owned a holiday villa in Pompeii he called his “Pompeianum.”

23. In Rome, the location of Cicero’s house has been roughly identified from excavations of the Republican-era stratum on the northwestern slope of the Palatine Hill.

24. Although his marriage to Terentia was one of convenience, it’s commonly known that Cicero held great love for his daughter Tullia.

25. When his daughter suddenly became ill in February 45 BC and died after having seemingly recovered from giving birth to a son in January, Cicero was stunned. “I have lost the one thing that bound me to life,” he wrote to Atticus. 26. Cicero hoped that his son Marcus would become a philosopher like him, but Marcus himself wished for a military career.

27. His son joined the army of Pompey in 49 BC and after Pompey’s defeat at Pharsalus in 48 BC, he was pardoned by Caesar.

28. Cicero sent his son to Athens to study as a disciple of the peripatetic philosopher Kratippos in 48 BC, but his son used this absence from “his father’s vigilant eye” to “eat, drink and be merry.”

29. After Cicero’s murder, his son joined the army of the Liberatores but was later pardoned by Augustus.

30. Augustus’s bad conscience for not having objected to Cicero being put on the proscription list during the Second Triumvirate led him to aid considerably in Marcus Minor’s career.