Charles Augustus Lindbergh was an American aviator, military officer, author, inventor, explorer and environmental activist. At the age of 25, in 1927, he went from obscurity as a U.S. Air Mail pilot to instantaneous world fame by winning the Orteig Prize, which he won for making a nonstop flight from Roosevelt Field, Long Island, New York, to Paris, France. Take a look below for 30 more interesting and awesome facts about Charles Lindbergh.

1. Lindbergh covered the 33 and a half, 3600 statue miles, or 5800 kilometers, alone in a single-engine purpose built Ryan monoplane called the Spirit of St. Louise.

4. His achievement spurred interest in both commercial aviation and air mail, and Lindbergh himself devoted much time and effort to promoting such activity. 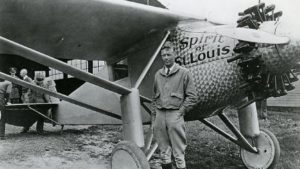 6. In March 1932, his infant son, Charles Jr., was kidnapped and murdered in what American media called the “Crime of the Century” and described by H.L. Mencken as, “the biggest story since the Resurrection.”

7. The murder case of his infant son prompted the United States Congress to establish kidnapping as a federal crime once the kidnapper had crossed state lines with their victim.

8. By late 1935, the hysteria surrounding the case had driven the Lindbergh family into voluntary exile in Europe, from which they returned in 1939.

9. Before the United States formally entered World War II, some people accused Lindbergh of being a fascist sympathizer.

10. An advocate of non-interventionism, he supported the antiwar America First Committee, which opposed American aid to Britain in its war against Germany, and resigned his commission in the United States Army Air Forces in 1941 after President Franklin Roosevelt publicly rebuked him for his views. 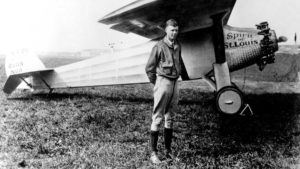 11. He publicly supported the U.S. war effort after the Japanese attack on Pearl Harbor and flew fifty combat missions in the Pacific Theater of World War II as a civilian consultant, though Roosevelt refused to reinstate his Air Corps colonel’s commission.

13. Lindbergh and his wife, the former Anne Morrow, were the parents of six children.

14. In 2003, 29 years after Lindbergh’s death and 2 years after his wife died, it was revealed that beginning in 1957, when he was 55 years old, Lindbergh had engaged in several secret adulterous affairs with three European women, with whom he fathered seven more children, none of whom learned of their father’s true identity until a decade after his 1974 death.

15. Lindbergh was born on February 4, 1902, in Detroit, Michigan, to Evangeline Lodge Land Lindbergh, a chemistry teacher, and Charles August Lindbergh, a U.S. Congressman.

16. He attended a variety of different schools while growing up, partially due to his parent’s separation when he was seven years old.

17. He graduated from Little Falls Senior High School in 1918, and enrolled at the University of Wisconsin-Madison’s College of Engineering.

18. Lindbergh dropped out of college in his sophomore year and went to begin flight training in Lincoln, Nebraska in 1922.

19. His first solo flight took place in 1923, four years before his transatlantic solo flight that made aviation history. 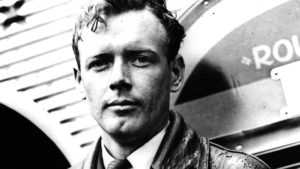 20. Lindbergh learned to fly at the Nebraska Aircraft Corporation. His first ever flight took place on April 9th, 1922, when he was the passenger in a two person Lincoln Standard biplane, with Otto Timm as the pilot.

21. After completing his training in Nebraska, Lindbergh became a stunt pilot and daredevil. He performed various daredevil feats such as parachuting, wing-walking, and even changing planes mid-air. This type of daredevil stunt piloting was called “barnstorming.”

22. In October 1923, Lindbergh sold his first airplane to an aviation student. The plane was discovered almost 50 years later in a barn and now sit son display at Garden City, New York’s Cradle of Aviation Museum.

24. Lindbergh was ordered to report to Brooks Field on March 19th, 1924, to begin training for the United States Army Air Service. He graduated top of his class 8 days after a serious mid-air collision that forced him to bail out of the aircraft. Only 18 of the original 104 cadets graduated. 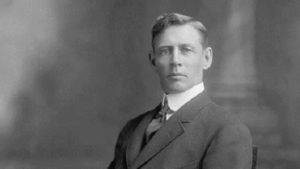 25. He was granted his U.S. Army pilot’s wings in March 1925, and appointed 2nd Lieutenant in the Air Service Reserve Corp.

26. Lindbergh received millions of fan letters after his famous flight.

27. He took a solo flight from Washington to Mexico later in 1927, and he met and married Anne Morrow.

29. Lindbergh was involved in the early space program and he also helped invent an early artificial heart.