Aaron Burr Jr. was an American politician. He was the third Vice President of the United States, serving during Thomas Jefferson‘s first term. Take a look below for 30 more interesting and awesome facts about Aaron Burr.

1. Burr served as a Continental Army officer in the American Revolutionary War, after which he became a successful lawyer and politician.

2. He was elected twice to the New York State Assembly, was appointed New York State Attorney General, was chosen as a U.S. senator from the State of New York, and reached the apex of his career as vice president.

3. In the waning months of his tenure as president of the Senate, he oversaw the 1805 impeachment trial of Supreme Court Justice Samuel Chase.

4. Burr shot his political rival Alexander Hamilton in a famous duel in 1804, the last full year of his single term as vice president.

5. He was never tried for the illegal duel and all charges against him were eventually dropped, but Hamilton’s death ended Burr’s political career. 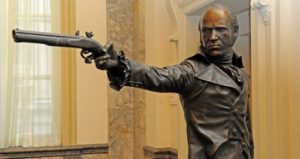 7. His activities eventually led to his arrest on charges of treason in 1807.

8. The subsequent trial resulted in acquittal, but Burr’s western schemes left him with large debts and few influential friends.

9. In a final quest for grand opportunities, he left the United States for Europe.

10. He remained overseas until 1812, when he returned to the United States to practice law in New York City, where he spent the rest of his life in relative obscurity.

12. His father, Reverend Aaron Burr Sr., was a Presbyterian minister and second president of the College of New Jersey. 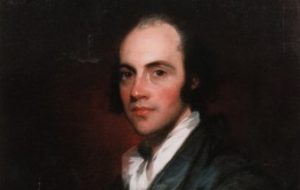 13. His mother, Esther Burr, was the daughter of a noted Calvinist theologian.

14. He had an elder sister named Sarah.

15. His father died in 1757, barely a year after his birth and his mother passed away in 1758. Initially, the siblings lived with their maternal grandparents; but they too died within a year.

17. In 1758, their maternal uncle Timothy Edwards came of age; then then assumed their guardianship.

18. As a child, Burr was bright, charming, handsome and witty.

19. He was intellectually gifted, but at the same time uncontrollable. Even at his early age, he began to show a determination to succeed.

20. In 1769, at the age of 13, Burr entered the College of New Jersey to the sophomore class. Here, he became a member of both the American Whig Society and Cliosophic Society. 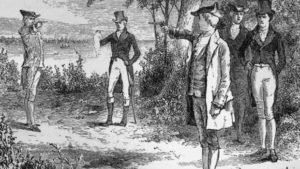 22. After two years of rigorous training, he changed his mind and enrolled at the Litchfield Law School at Connecticut.

23. In 1775, as the news came that the local militia had clashed with the British troops at Lexington and Concord, he abandoned his studies to join the Continental Army. He was then 19 years old.

24. Despite financial setbacks, Burr lived out the remainder of his life in New York in relative peace, until 1833, when his second marriage failed after four months, soon followed by medical difficulties.

25. Burr adopted or otherwise acknowledged two sons and two daughters late in his life, after the death of his daughter Theodosia.

26. On July 1, 1833, at the age of 77, Burr married Eliza Jumel, a wealthy widow who was 19 years younger. They lived together briefly at her residence, which she had acquired with her first husband, the Morris-Jumel Mansion in the Washington Heights neighborhood in Manhattan. 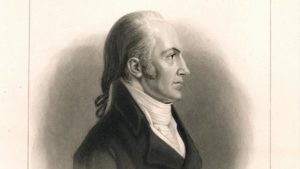 27. Soon after the marriage, she realized that her fortune was dwindling due to Burr’s land speculation losses.

28. She separated from Burr after four months of marriage. For her divorce lawyer, she chose Alexander Hamilton Jr., and the divorce was officially completed on September 14, 1836, coincidentally the day of Burr’s death.

29. Burr suffered a debilitating stroke in 1834, which rendered him immobile.

30. In 1836, Burr died on Staten Island in the village of Port Richmond, in a boardinghouse that later became known as the St. James Hotel. He was buried near his father in Princeton, New Jersey.