Krishna is a major deity in Hinduism. He’s worshiped as the eighth avatar of the god Vishnu and also as the supreme God in his own right. He’s the god of compassion, tenderness and love in Hinduism, and is one of the most popular and widely revered among Indian divinities. Krishna’s birthday is celebrated every year by Hindus on Janmashtami according to the lunisolar Hindu calendar, which falls in late August or early September of the Gregorian calendar. Take a look below for 30 more interesting and amazing facts about Krishna.

1. Krishna is known by numerous names, such as Govinda, Mukunda, Madhusudhana, Vasudeva and Makhan chor.

2. He is the central character in the Mahabharata, the Bhagavata Purana and the Bhagavad Gita, and is mentioned in many Hindu philosophical, theological and mythological texts.

3. Krishna is portrayed in various perspectives, such as: a god-child, a prankster, a model lover, a divine hero, and as the universal supreme being.

4. The synonyms of Krishna have been traced to the first millennium BCE literature.

5. In some sub-traditions, Krishna is worshiped as Svayam Bhagavan, and this is sometimes referred to as Krishnaism. 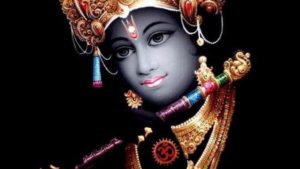 7. He is a pan-Hindu god, but is particularly revered in some locations such as Vrindavan in Uttar Pradesh, Jagannatha in Odisha, Mayapur in West Bengal, Dwarka and Junagadh in Gujarat, Pandharpur in Maharashtra, Udupi in Karnataka, Nathdwara in Rajasthan and Guruvayur in Kerala.

8. Krishna’s name is basically an adjective, which means “black” or “dark”. Another popular translation of the name is “all attractive.”

9. Krishna once preached against the orthodox form of worship of the Vedic Gods like Indra. According to Bhagavata Purana, Krishna advised people of Brindavan to worship the Govardhan Hill instead of Indra as it brings the rain for agriculture. This made Indra angry and he set out a massive storm in Brindavan but Krishna rescued the people by lifting the Govardhan Hill and using it as an umbrella to protect the villagers.

10. He is part of the Jain religion. He is represented as one of the Triads, named Vasudeva. 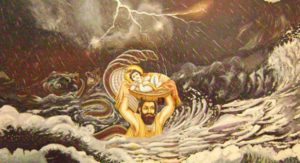 11. It’s believed that Krishna and Draupadi were brother and sister. According to legend, Draupadi was born to assist Krishna with destroying the sinful kings.

12. Krishna was born in Rohini Nakshatra as the eighth son of Devki and Vasudeva.

13. He brought back the son of his guru, Sandipani, who was dead. Therefore, he paid his Gurudakshina to Sage Sandipani.

14. Krishna had a total of 16,108 wives, of which only eight were his princely wives, also known as Ashtabharya, or patrani.

15. The Buddhist Jataka tales mention Krishna. In the Vaibhav Jataka, he’s showcased as the prince and legendary figure in India who cuts off his evil uncle Kansa’s head and kills all the kings to rule over Jambudvipa.

16. It’s believed that Krishna was a “Manifestation of God”, or one of the prophets who has revealed the “Word of God” to people on Earth. Therefore, it’s said that he shares a powerful image with Abraham, Moses, Zoroaster, Buddha, Muhammad and Jesus.

17. Krishna granted Eklavya a wise after he sacrificed his thumb to Dronacharya. He was grated another incarnation as Dhrishtadyumna who stepped out of the yajna fire to kill Dronacharya. 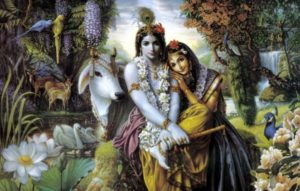 19. Karna was the first person who knew the secret of the birth of Krishna, and it was Krishna who told him. Krishna made an attempt to persuade Karna when he was in Hastinapur so that he could avert the war. But, Karna politely refused the offer and also requested Krishna to keep Pandavas out of the secret.

20. In the event of Ras Leela, Krishna danced with the Gopis, and it was such that each Gopis thought that she was dancing the Krishna alone.

21. There was a time when Duryodhana attempted to imprison Krishna when he came for negotiations. However, that attempt was a failure.

22. Krishna shows his Virat Roopa, the great form, to all the kings. When Dhritarashtra knew about this, he pleaded to Krishna to see this form once. Other souls shut their eyes when he transformed, and as such, only the holy souls who were blessed enough to see that form benefited. 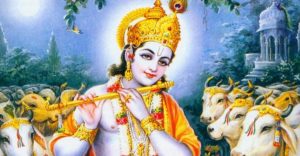 24. Even though Krishna is often shown as having a blue complexion, the truth is that he had a dark complexion that looked blue only because his aura had a tinge of blue around him.

25. Krishna worship or reverence has been adopted by several new religious movements since the 19th century, and he’s sometimes a member of an eclectic pantheon in occult texts, along with Greek, Buddhist, biblical and even historical figures.

26. Ahmadiyya, a modern-era movement, consider Krishna as one of their ancient prophets. Ahmadi’s consider themselves to be Muslims, but they’re rejected as apostates of Islam by mainstream Sunni and Shia Muslims, who don’t recognize Krishna as their prophet.

27. The medieval era arts of Vietnam and Cambodia feature Krishna. The earliest surviving sculptures and reliefs are from the 6th and 7th century, and these include Vaishnavism iconography.

28. Across the various theologies and philosophies, the common theme presents Krishna as the essence and symbol of divine love, with human life and love as a reflection of the divine.

29. Pandavas were related to Krishna from his mother’s side. Their mother, Kunti, was the sister of Vasudev, the father of Krishna.

30. Krishna’s favorite weapon was Sudarshan Chakra. Its notable uses were in the killing of Shishupala and more importantly, it was used to create the illusion of a sunset, which led to the killing of Jayadratha.