The Wizard of Oz is a 1939 American musical fantasy movie that was produced by Metro Goldwyn Mayer. The movie is considered to be one of the greatest films in cinema history, and it’s the best known and most commercially successful adaption of L. Frank Baum’s 1900 children’s book, The Wonderful Wizard of Oz. Take a look below for 30 more fun and fascinating facts about the Wizard of Oz.

1. There are actually two Wizard of Oz movies. The first was a 1925 silent film, and the second was the widely successful The Wizard of Oz released in 1939.

2. Shirley Temple, who was then America’s most popular child star, and Deanna Durbin were initially considered to play the role of Dorothy in the MGM version.

4. Ray Bolger was originally cast as the Tin Man but he preferred to be the Scarecrow because he felt like the character’s style would showcase his physicality and dancing ability.

5. Buddy Ebsen was the original Tin Man but after a few weeks of filming, he had an allergic reaction to the aluminum powder makeup and was replaced by Jack Haley. 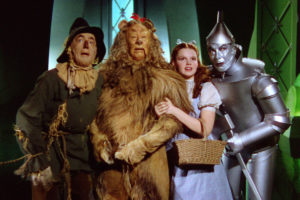 6. Since Dorothy was originally envisioned by studio executives to be a blonde, Judy Garland had to wear a wig for the first two weeks of filming, until they changed their minds.

7. Judy Garland was 16 years old when The Wizard of Oz was filmed. In the book, L. Frank Baum didn’t give an exact age for Dorothy, but the illustrations showed that she was clearly a child.

8. The biggest difference between the book and the movie is that in the book, the slippers were silver, while in the movie, they were ruby. This is because the studio executives thought that the hue would look better in Technicolor.

9. Bert Lahr, who played the Cowardly Lion, was paid $2,500 per week and had a guarantee of a minimum of five weeks of work. The entire shoot ended up taking 26 weeks.

10. Bert Lahr’s Cowardly Lion costume was made from real lion pelts and ended up weighing about 60 pounds.

11. Judy Garland’s daughter, Liza Minnelli, was married to Jack Haley Jr., who was the son of the actor who played the Tin Man.

12. The horses in the Emerald City were colored with Jello, which they constantly kept trying to lick off.

14. The movie was nominated for six Oscars, but lost Best Picture to Gone with the Wind.

15. The tornado in the movie was actually a 35 foot long muslin stocking spun around with dust and dirt. 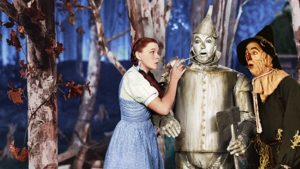 16. The producers ended up cutting many of the Wicked Witch’s scenes because they thought that they would be too scary for children.

17. Baum ended up publisign 17 sequels to The Wonderful Wizard of Oz, with three of them being posthumously.

18. The Smithsonian exhibit housing Dorothy’s red slippers is so popular that the carpet in front of the slippers has been replaced many times due to wear and tear.

19. The Munchkins were played by a troupe called the Singer Midgets, who were named after their manager Leo Singer. They were from Europe and a few of them took the opportunity to immigrate and escape the Nazis. Their voices were dubbed because many of them couldn’t speak English very well.

20. The fire that blazes out from Dorothy’s shoes when the Witch tries to touch them was actually apple juice spraying out of them, but sped up on film.

21. Judy Garland couldn’t stop giggling during the scene where Dorothy slaps the Cowardly Lion. Director Victor Fleming apparently took Garland aside and slapped her, after which she did the scene in one take.

22. Charley Grapewin, the actor that played Uncle Henry, began his career in the late 19th century as a circus trapeze artist. He also appeared as Grandpa Joad in the 1940s The Grapes of Wrath.

23. Several actors playing Winged Monkeys in the forest were injured when the wires suspending them above the sound stage snapped, sending them falling several feet below. 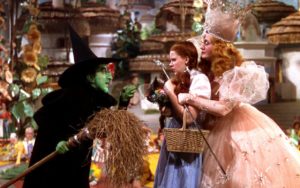 26. The pre OZ Kansas scenes were shot in sepia and not in black and white. They were shown on black and white in the television version until 1989 when a sepia tint was restored to the movie.

27. MGM spent about $2.78 million making the movie, which makes it the studio’s most expensive production at that point.

28. There were about 4 to 5 pairs of ruby slippers made for the movie. Each pair was made of red satin covered by 2,300 sequins.

29. The Cowardly Lion’s costume sold for $3.1 million at auction in 2014. At that same auction, the piano from Casablanca sold for $3.4 million.

30. To create the voices of the Winkies, which were the Witch’s castle guards, the actors’ voices were recorded and then slowed down.