Tunisia is a North African country bordering the Mediterranean Sea and the Sahara Desert. In the capital, Tunis, the Bardo Museum has archaeological exhibits from Roman mosaics to Islamic art. The city’s medina quarter encompasses the massive Al-Zaytuna Mosque and a thriving souk. Take a look below for 30 more fun and fascinating facts about Tunisia.

1. Tunisia is bordered by Algeria to the west, Libya to the southeast and the Mediterranean Sea to the north and east.

2. Though it’s relatively small in size, Tunisia has great environmental diversity due to its north-south extent.

3. The Sahara Desert is the largest hot desert in the world, and a small part of it covers Tunisia. The Grand Erg Oriental is a large erg or “field of sand dunes” in central Tunisia.

4. The Atlas Mountains extend northeast from the Algerian border to the Mediterranean Sea. To the north and east of those mountains, the topography is generally characterized by low, rolling hills and flat coastal areas. 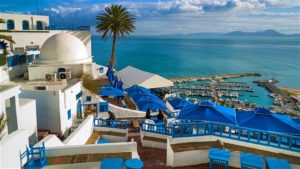 7. Some of the Mediterranean’s best beaches are found in Tunisia. To the north is a coastline of crystal clear waters, lush vegetation and wild cliffs, while the southern coastline has a desert landscape surround it.

9. The Sahel, a broadening coastal plain along Tunisia’s eastern Mediterranean coast, is among the world’s premier areas of olive cultivation.

11. The Ezzitouna Mosque was built in 732 A.D. by Ubaidillah bin al-Habhab, the governor of Africa in the reign of Hisham ibn Abdul Malik of the Umayyad dynasty. The mosque is located in the middle of the old city market complex. 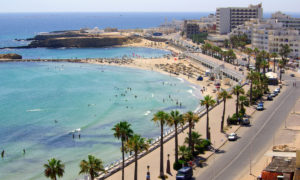 12. Tunis is currently the only town in Tunisia to be equipped with a metro service, which is more like a tramway.

13. Tunisia has served as a popular location for some of Hollywood’s biggest movies, such as Star Wars, Jesus of Nazareth, The English Patient and Raiders of the Lost Ark.

15. In the Matmata area of Tunisia, people still live in underground houses.

16. Camel is eaten mainly by people living in southwest Tunisia.

17. The city of Kairouan is the fourth most important city in the Islamic world after Mecca, Medina and Jerusalem.

18. When the movie “Raiders of the Lost Ark” was shot in Tunisia, crew members had to remove 300 television antennas from homes in Kairouan for one scene in order to make a rooftop shot look like 1936.

19. Polygamy and repudiation, which is when a man divorces his wife by simply declaring it’s so, are outlawed in Tunisia. 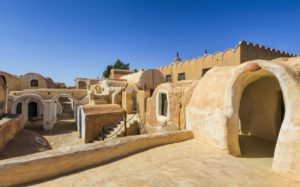 20. Women can pass on their names and nationalities to their children.

22. Independent Tunisia under Bourguiba made a major effort to improve women’s status by encouraging education and employment, improving the conditions of marriage, and encouraging family planning.

23. Tunisians are relatively egalitarian in their interpersonal relations, but there is a strong sense of etiquette.

24. Stone age tools dating from the Middle Stone Ages were found near Kelibia and are some of the earliest evidence of human activity in the region.

25. Finds have been made of stone blades, tools, and small figurines of the Capsian culture, which is named after Gafsa in Tunisia, which lasted from around 10,000 to 6,000 B.C.

26. In about 480 B.C., the Phoenician founded Carthage. They slowly built up the city while also building up their empire in the Mediterranean.

27. A major mercantile power and a military rival of the Roman Republic, Carthage was defeated by the Romans in 146 B.C. The Romans would then occupy Tunisia for the next 800 years.

28. After several attempts starting in 647, the Arabs conquered the whole of Tunisia by 697, followed by the Ottomans between 1534 and 1574. The Ottomans held power for over 300 years. 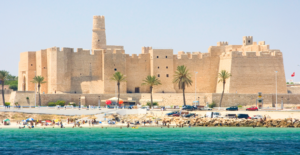 30. Tunisia achieved independence from France in 1956 with Habib Bourguiba as Prime Minister.