Neptune is the eighth and farthest known planet from the Sun in the Solar System. It’s the fourth largest planet by diameter, the third most massive planet and the densest giant planet in our Solar System. Neptune has the mass 17 times greater than the Earth and is slightly more massive than Uranus. Take a look below for 30 more fun and fascinating facts about Neptune.

1. Neptune was not known to ancient civilizations as it’s not visible to the naked eye. It was first observed in 1846 and it’s position was determined using mathematical predictions.

2. Unexpected changes in the orbit of Uranus led Alexis Bouvard to deduce that its orbit was subject to gravitational perturbation by an unknown planet, which turned out to be Neptune.

3. Neptune’s largest moon, Triton, was discovered shortly after the planet itself was discovered. However, none of the planet’s remaining known 13 moons were found telescopically until the 20th century.

4. Neptune’s distance from the Earth gives it a very small apparent size, making it difficult to study it with Earth-based telescopes.

5. Like Jupiter and Saturn, Neptune’s atmosphere is made up primarily of hydrogen and helium, along with small amounts of hydrocarbons and maybe nitrogen. However, it does have a higher proportion of ices such as water, ammonia and methane. 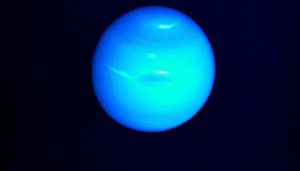 6. Neptune’s interior is a lot like Uranus, in that it’s primarily composed of ices and rocks. This is why Uranus and Neptune are normally considered ice giants.

7. Traces of methane in the outermost regions are one of the reasons why Neptune has a blue appearance.

8. As opposed to the relatively featureless atmosphere of Uranus, Neptune’s atmosphere has active and visible weather patterns. For example, Voyager 2 recorded that the planet’s southern hemisphere had a Great Dark Spot that was comparable to the Great Red Spot on Jupiter.

9. The extreme weather patterns are primarily driven by the strongest sustained winds of any planet in the Solar System, with recorded wind speeds as high as 2,100 kilometers per hour, or 1,300 miles per hour.

10. Because of its vast distances from the Sun, Neptune’s outer atmosphere is one of the coldest places in the Solar System, with temperatures at its cloud tops approaching -218 degrees Celsius.

11. Temperatures at the planet’s centre are about 5,100 degrees Celsius.

12. Neptune has a faint and fragmented ring system, which are called “arcs,” which was discovered in 1982, then later confirmed by Voyager 2.

13. Shortly after it was discovered, Neptune was simply called “the planet exterior to Uranus” or as “Le Verrier’s planet.”

14. The first suggestion for a name came from Galle, who proposed the name Janus. In England, Challis suggested the name Oceanus.

15. Le Verrier, however, quickly proposed the name Neptune while falsely stating that this had been officially approved by the French Bureau des Longitudes. The name stuck once Struve came out in favor of the name on December 29, 1846. 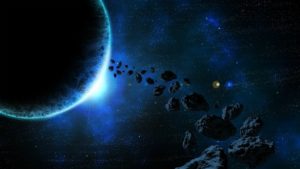 16. Neptune’s internal structure closely resembles that of Uranus. Its atmosphere forms about 5% to 10% of its mass and extends about 10% to 20% of the way towards the core, where it reaches pressures of about 10 GPa, or 100,000 times that of Earth’s atmosphere.

18. The core of Neptune is likely composed of iron, nickel and silicates, with an interior model that gives it a mass about 1.2 times that of Earth.

19. The abundance of methane, ethane and acetylene at Neptune’s equator is 10 to 100 times greater than at the poles. This is used as evidence for upwelling at the equator and subsidence near the poles.

20. In 2007, it was found that the upper troposphere of Neptune’s south pole was about 10 K warmer than the rest of its atmosphere, which averages approximately 73 K, or -200 degrees Celsius.

21. Neptune’s dark spots are thought to occur in the troposphere at lower altitudes than the brighter cloud features, so they appear as holes in the upper cloud decks.

23. Neptune is the farthest known planet from the Sun, yet its internal energy is sufficient to drive the fastest planetary winds seen in the Solar System.

24. Neptune has 14 known moons, with Triton being the biggest and making up more than 99.5% of the mass in orbit around Neptune. 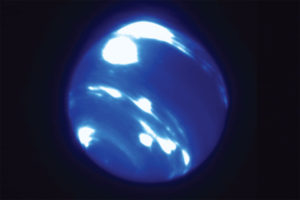 25. Unlike all other large planetary moons in the Solar System, Triton has a retrograde orbit, which indicates that it was captured rather than forming in place. It was most likely once a dwarf planet in the Kuiper belt.

26. Triton is close enough to Neptune to be locked into a synchronous rotation and it’s slowly spiralling inward because of tidal acceleration. In fact, in about 3.6 billion years when it reaches the Roche limit, it will be torn apart.

27. In 1989, Triton was the coldest object that had yet been measured in the Solar System, with estimated temperatures of -235 degrees Celsius.

28. Neptune has a planetary ring system, though it’s much less substantial than that of Saturn. The rings are mostly made up of ice particles coated with silicates or carbon based materials, which is what gives them a reddish hue.

29. The first of these planetary rings was detected in 1968 by a team led by Edward Guinan.

30. Earth based observations announced in 2005 appeared to show that Neptune’s rings are much more unstable than previously thought and that their decay, when based on images done by Voyager 2, is so significant that some arcs might disappear in as little as one century.