1. Released on December 17th, 2003, The Lord of the Rings: The Return of the King became one of the most critically and commercially successful movies of all time.

2. It was the second movie to gross $1 billion worldwide, becoming the highest-grossing movie released by New Line Cinema, as well as the biggest financial success for Time Warner in general at the time.

4. At the 76th Academy Awards, the movie won all 11 Academy Awards for which it was nominated, therefore holding the record for the highest Oscar sweep.

5. The movie jointly holds the record for the largest number of Academy Awards won with Ben-Hur and Titanic. 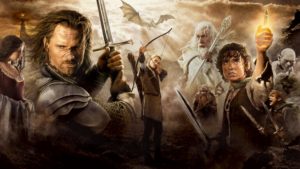 6. Andy Serkis and Elijah Wood were each given prop rings by Peter Jackson, used in the movie. They both thought they had the only one.

7. The dead oliphaunt carcass, used in the movie, is reportedly the largest prop every built for a movie. According to members of the Prop Department, Director Peter Jackson still thought it could have been bigger.

8. Peter Jackson is arachnophobic, and based the Shelob design on the types of spiders he feared the most.

9. Since John Rhys-Davies suffered constant rashes from wearing the Gimli make-up, the Make-up Department gave him the opportunity to throw his Gimli mask into the fire on his last day of pick-up photography.

10. Horses owned by the production company were placed up for auction to the cast and crew after the movie was shot. Viggo Mortensen purchased two horses, the one he rode for most of the movie, and one for Liv Tyler’s riding double.

11. The movie made a 1480% profit for New Line Studios on their initial outlay. 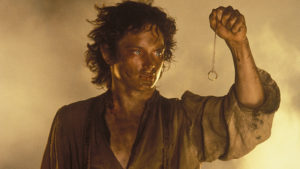 12. To get enough extras for the Battle at the Black Gate, a few hundred members of the New Zealand Army were brought in. They apparently were so enthusiastic during the battle scenes, that they kept breaking the wooden swords and spears they were given.

13. Viggo Mortensen estimates that during the course of filming the entire trilogy and including all takes, he “killed” every stuntman on the production at least 50 times.

14. Gollum is missing his left ear lobe. This is due to an air trap in the casting that was made for Peter Jackson’s approval of the figure. When looking at the casting, the design team concluded that it should stay that way, since it looked like a battle wound that might have occurred during Gollum’s past adventures.

15. According to a magazine article, Peter Jackson hated the Army of the Dead, thinking it was too unbelievable. However, he kept it in the script, because he didn’t want to disappoint diehard fans of the book.

16. The battle scenes, which reportedly contain over 200,000 digital participants, are so huge, that an extra room had to be built onto Weta Digital’s effects facility, to house all the computer equipment needed to render the scenes.

17. Elijah Wood was wrapped in a latex-like material that represented Shelob’s webbing. On the DVD, he joked that it was like being encased in the world’s largest condom. 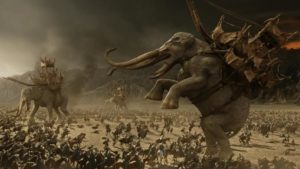 19. King Theoden touching the spears of his soldiers before they charge into battle, was Bernard Hill’s idea.

20. After the premiere in Wellington, the city held a part that went on until dawn, funded by the City Council to the tune of $400,000, with street performers, outdoor screenings, an introduction from Prime Minister Helen Clark, and a giant mock-up of a Nazgul flying over the Embassy Theater.

21. Miranda Otto had to undergo many fittings to finally settle on a helmet that disguised her face yet revealed enough of it so that the audience would know who she was.

22. 100,000 lined the streets of Wellington for the world premiere. That’s about a quarter of the city’s population.

23. The live-action Rohan Army was made up of 700 New Zealander extras, who responded to an open casting call for anyone who could ride a horse. Many of them were women, who had to perform male riders. The only woman in the Rohirrim huge assault is Eowyn, who is played by Miranda Otto.

24. While filming the trilogy, Viggo Mortensen got so into character, that during a conversation, Peter Jackson referred to him as “Aragorn” for over half an hour, without Mortensen realizing it. 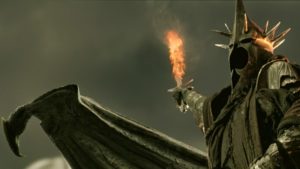 25. The “oil” that Denethor pours over himself and Faramir was a combination of water and glycerin, to achieve an appropriate glistening effect. Because this soaked the wigs and costumes, this scene had to be filmed in a single take.

26. In the extended cut of the film, the song during the Houses of Healing sequence is sun by Liv Tyler.

27. For the scene where Merry and Pippin are smoking their pipes at Isengard, Dominic Monaghan had to drink a glass of milk beforehand, to keep himself from throwing up while smoking the pipe.

28. Most of the lines Legolas says in the Extended Edition scene of the “Paths of the Dead” are direct quotes from the book.

29. For the lighting of the beacons sequence, one beacon was helicoptered up to the top of a mountain and then lit. The rest were all computer generated.

30. The amount of money that New Line Cinema reclaimed in tax breaks on the three The Lord of the Rings movies was ten times more than the annual budget of the New Zealand Film commission, which funds local filmmaking.