Ben-Hur is a 1959 American biblical epic movie, directed by William Wyler, produced by Sam Zimbalist for Metro-Goldwyn-Mayer and starring Charlton Heston as the title character. A remake of the 1925 silent film with the same title, Ben-Hur was adapted from Lew Wallace’s 1880 novel Ben-Hur: A Tale of the Christ. Take a look below for 30 more fun and interesting facts about Ben-Hur.

2. With a budget of $15.175 million, Ben-Hur has the largest budget, as well as the largest sets built, of any movie produced at the time.

3. Costume designer Elizabeth Haffenden oversaw a staff of 100 wardrobe fabricators to make the costumes, and a workshop employing 200 artists and workmen provided the hundreds of friezes and statues needed in the movie.

4. Under cinematographer Robert L. Surtees, MGM executives made the decision to film the picture in a widescreen format, which Wyler strongly disliked. 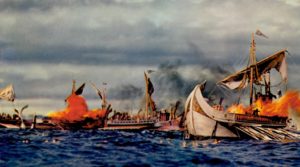 6. The sea battle was filmed using miniatures in a huge tank on the back lot at the MGM Studios in Culver City, California.

7. The 9 minute chariot race has become one of cinema’s most famous sequences, and the film score, composed and conducted by Miklos Rozsa, is the longest ever composed for a movie and was highly influential on cinema for more than 15 years.

12. Ben-Hur is the only Hollywood movie to make the Vatican approved film list in the category of religion. 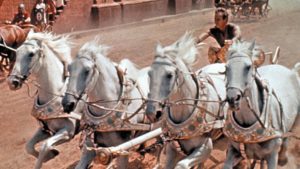 13. The desert sequences were all set to be filmed in Libya until authorities in the country, a Muslim nation, realized that the movie was promoting Christianity. The government ordered MGM out of the country, forcing the studio to shift the filming to Spain, which has the only desert in Europe.

14. The chariot race required 15,000 extras on a set constructed on 18 acres of backlot at Cinecitta Studios outside Rome. Tour buses visited the set every hour. 18 chariots were built, with half being used for practice. The race took five weeks to film.

15. The sum wagered by Messala against the sheikh of 4-to-1 odds on 1,000 talents, would be the modern-day equivalent of approximately $660 million dollars.

16. William Wyler used to joke that it took, “a Jew to make a good film about Jesus.”

17. Martha Scott was 45 at the time of filming, only 10 years old than her screen son, Charlton Heston. She also played Heston’s mother in The Ten Commandments three years previously.

18. Paul Newman was offered the role of Judah Ben-Hur but turned it down because he’d already done one Biblical-era movie, The Silver Chalice, and hated the experience. He also said that it taught him that he didn’t have the legs to wear a tunic. 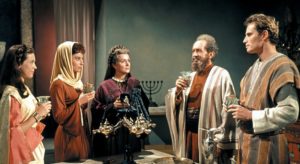 19. The 10 square block set that represents Jerusalem is a historically accurate one.

20. One of the very few and very expensive 65mm cameras in existence was destroyed during the filming of the chariot race.

21. The movie was originally intended to be made in 1956 with Marlon Brando in the lead role.

22. When he was cast as Messala, Stephen Boyd grew a bushy beard for the role, only to be told that fashionable Roman men of the time didn’t wear beards.

23. An infirmary was made especially for the filming of the dangerous chariot race scenes. However, in the end, very few injuries were actually sustained, most of them being sunburns.

24. Jesus Christ was played by American opera singer Claude Heater, who went uncredited in his only feature film role, because he never spoke. 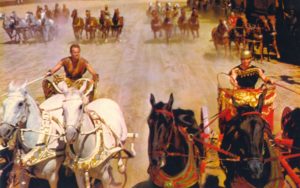 26. At 2 hours, 1 minute, and 23 seconds, Charlton Heston’s performance in Ben-Hur is the longest to ever win an Academy Award for Best Actor, and the second longest to win in any category.

27. By the time filming had finished, MGM’s London laboratories had processed over 1,250,000 feet of 65mm Eastman Color film, at the cost of one dollar per foot.

28. The process of amassing the more than one million props that were needed began in Rome two years before cameras started rolling.

29. For some sequences in the chariot race, some of the chariots had three horses instead of four. This enabled the camera car to move in closer.

30. Producer Sam Zimbalist, 54, collapsed and died of a heart attack 40 minutes after leaving the set complaining of chest pains.

14 Incredible And Fun Facts About Impmon From Digimon