1. The movie is set 32 years before the original movie, and follows Jedi Knight Qui-Gon Jinn and his apprentice Obi-Wan Kenobi as they protect Queen Amidala, in hopes of securing a peaceful end to a large scale interplanetary trade dispute. Joined by Anakin Skywalker, a young slave with unusually strong natural powers of the Force, they simultaneously content with the mysterious return of the Sith.

2. The Phantom Menace grossed more than $924.3 million worldwide during its initial theatrical run, making it the second highest grossing movie worldwide at the time, behind Titanic.

4. During filming, Ewan McGregor made lightsaber noises as he dueled. It was noted and corrected during post-production.

5. According to Star Wars canon, Obi-Wan’s hanging braid is a Jedi tradition common to all Padawan Learners. When his Master feels that he has reached proper maturity, he cuts the braid with his lightsaber, signifying that the student is now a full Jedi Knight. 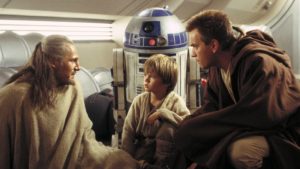 6. Natalie Portman missed the premiere party in New York City because she had to go home and study for her high school final exams.

7. Natalie Portman’s voice was digitally enhanced to distinguish between Padme and Queen Amidala.

8. After the movie’s end credits finish rolling, the sound effect of Darth Vader’s breathing can be heard.

9. During the first week of the first trailer’s release, many theaters reported up to 75% of their audiences paying full price for a movie, then walking out after The Phantom Menace trailer was shown.

10. Sets were built only as high as the tops of the actors’ heads and computer graphics filled in the rest. Liam Neeson was so tall that he cost the set crew an extra $150,000 in construction.

11. 20th Century Fox released the first trailer, with strict instructions that it not be shown before a certain date. When a Canadian movie theater accidentally showed it a day early, they lost the rights to show the movie. 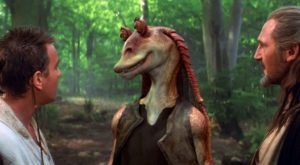 13. When fully dressed, and in makeup, Natalie Portman and Keira Knightley resembles each other so much, that even Knightley’s mother Sharman Macdonald, who visited the set, had trouble identifying her own daughter.

14. The word “lightsaber” is never used in the movie and is ultimately the only Star Wars movie that doesn’t have a single character speak the work. When Anakin talks to Qui-Gon, he calls it a “laser sword.”

15. Keira Knightley’s parents tried to convince her not to audition, but the 12 year old actress still sought a role, given that she was a Star Wars fan.

16. The sound of the underwater monsters growling near the beginning of the movie was made by the main sound technician’s three year old daughter. The sound of her crying was recorded, and the frequency lowered to obtain the sound heard in the movie.

17. The starship Enterprise from Star Trek: The Next Generation can be seen briefly among the traffic flying around Coruscant.

18. During the credits, Jabba the Hutt is listed as being played by “himself.” 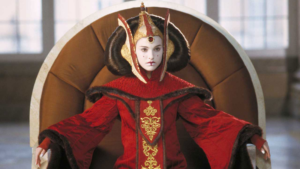 19. Liam Neeson was so eager to be in the movie that he signed on without having read the script.

20. To create the sounds of the spectators during the pod race scene, sound designer Ben Burtt took a recorder to a San Francisco 49ers game, and recorded the crowd’s reactions.

21. Darth Maul only speaks a total of three lines.

22. The script explains that the reason Watto is always flying is because he’s crippled. Look closely, and you can see that one foot is longer than the other. He also talks out of the side of his mouth because the broken tusk slurs his words.

24. Earlier drafts of the script placed more emphasis on the character of Obi-Wan Kenobi. Originally, he was already a fully trained Jedi by the start of the movie, and also the only Jedi negotiator sent to Naboo. In this same draft, the character of Qui-Gon Jinn wasn’t introduced until the characters reached Coruscant, and that character was of the same age as Obi-Wan, not his mentor.

25. The movie was shipped to theaters as “The Doll House” to thwart privacy attempts. 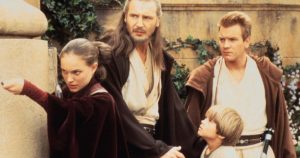 27. According to the Blu-Ray commentary, the scene where Padme and Anakin first talk is the one that was used to audition potential Anakin actors. The crew also states that Jake Lloyd didn’t like filming that particular scene.

28. The sound of the hovering battle tanks, used by the battle droids, was created by running an electric razor around a metal salad bowl, and then digitally lowering the pitch.