Saban’s Power Rangers is a 2017 American superhero movie based on the franchise of the same name, directed by Dean Israelite and written by John Gatins. It’s the third Power Rangers movie, and is a reboot of the series. The movie features the main characters of the Mighty Morphin Power Rangers television series with a new cast. Take a look below for 30 more fun and interesting facts about Saban’s Power Rangers.

3. Franchise creator Haim Saban returned to produce the movie under his investment firm.

4. The movie was met with mixed reviews upon release, with criticism primarily focusing on its uneven tone, product placement and divergences from its source material, Saban’s Power Rangers grossed $142 million worldwide, and was labelled a box office disappointment.

5. The Angel Grove High logo in the movie is the same one used in Mighty Morhpin Power Rangers. 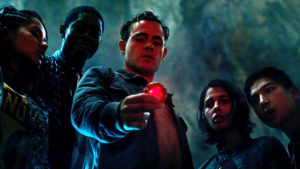 7. Amy Jo Johnson and Jason David Frank, who were Kimberly and Timmy in Might Morphin Power Rangers, have cameo roles in Saban’s Power Rangers as Angel Grove citizens. They’re seen wearing their Ranger colors from that show.

8. In Trini’s bedroom, there’s a window that features a circle with a tiger’s head. This was the Yellow Ranger’s original Power Coin design in Mighty Morphin Power Rangers.

9. At one point, the Yellow Ranger Trini wears a shirt that reads 1973. This was the year that the original Trini, Thuy Trang was born.

10. A linguist was hired to create the language of Eltar. Bryan Cranston and Bill Hader had trouble with the language, but Elizabeth Banks became fluent in it.

11. The teaser trailer generated more than 150 million views in its first 48 hours. 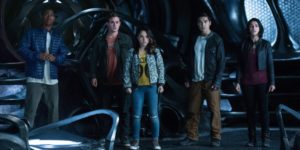 14. According to the director Dean Israelite, a scene in the trailer of Jason and Kimberly kissing was cut after test audiences voiced that they felt it put focus on their romance as opposed to Kimberly’s redemption story.

15. In preparation for the movie, the streaming service Twitch streamed all 831 episodes of Mighty Morphin Power Rangers, lasting from March 14 to March 30, 2017.

16. The Power Ranger uniforms have been upgraded from spandex armor to an alien crystal that forms around the rangers.

17. The watch that Billy wears is the watch from Mighty Morphin Power Rangers, which Billy made in that show so that the Rangers can communicate with each other or teleport to Zordon.

18. Amy Jo Johnson revealed in an interview that she only landed her cameo after her agent phoned the production in Canada. She had been turned down when her agent in the United States had attempted to secure her a cameo.

19. Throughout the movie, all the Power Rangers wear something that is in their Ranger color. 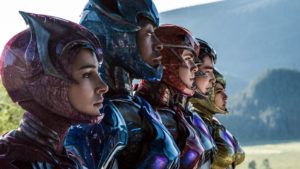 20. Ludi Lin visited his old high school to prepare for his role as Zack. He blended in successfully, even telling some students that he was a transfer student and asking for a tour, until one of his old teachers walked up to him and asked, “Ludi? You’re still here?”

21. In Billy’s bedroom, there are toys of Squat, Baboo and Finster on his shelf. These monsters were characters from the original television series up to Power Rangers in Space.

22. During the closing credits, a statement reads: “Based off of Super Sentai by Toei Productions.” This marks Saban’s Power Rangers as one of the few Power Rangers features to pay homage to its Japanese origins.

23. Ludi Lin auditioned for the movie in a low-equipped television studio in Singapore because he had no time to go to Los Angeles. He learned while being in Beijing, China, from his manager that the director was really impressed by him.

24. In an early draft by Max Landis, the writer switched the colors of both Kimberly and Zack, making Zack the Pink Ranger and Kimberly the Black Ranger. The concept was quickly scrapped.

25. The Ranger actors worked a lot with their stunt doubles for the fighting scenes, and had extensive training prior to shooting. 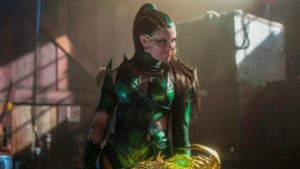 26. Naomi Scott, who plays Kimberly the Pink ranger, originally auditioned for the role of Trini the Yellow Ranger.

28. According to audio commentary from director Dean Israelite and writer John Gatins, the scene between Jason and Kimberly where they discuss running away together was the scene used to audition for the characters. They indicated that it was one of the first scenes written for the movie.

30. In the television series, Zordon was trapped in a time warp by Rita Repulsa. In Saban’s Power Rangers, Zordon’s essence was saved by Alpha 5 when he died and imprinted on their ship, in which he existed as an avatar of the ship.