Robert John Downey Jr., born April 4, 1965, is an American actor and singer. His career has included critical and popular success in his youth, followed by a period of substance abuse and legal troubles, and a resurgence of commercial success in middle age. For three consecutive years, from 2012 to 2015, Downey has topped the Forbes list of Hollywood’s highest paid actors, making an estimated $80 million in earnings between June 2014 and June 2015. Take a look below for 30 more fun and interesting facts about Robert Downey Jr.

1. Making his acting debut at the age of five, appearing in his father’s film Pound, Downey has appeared in roles associated with the Brat Pack, such as, Weird Science and Less Than Zero.

3. After being released in 2000 from the California Substance Abuse Treatment Facility and State Prison where he was held on drug charges, Downey joined the cast of the television series Ally McBeal playing Calista Flockhart’s love interest.

4. His role in Ally McBeal earned him a Golden Globe Award. However, his character was written out when Downey was fired after two drug arrests in late 2000 and early 2001. 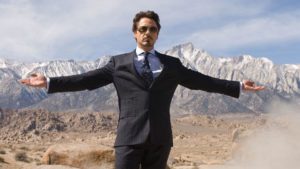 6. Downey’s career prospects improved when he was featured in the black comedy crime movie Kiss Kiss Bang Bang, for the mystery thriller Zodiac, and the satirical action comedy Tropic Thunder.

7. Beginning in 2008, Downey began portraying the role of Marvel Comics superhero Iron Man in the Marvel Cinematic Universe, appearing in several films as either the lead role, member of an ensemble cast or in a cameo.

8. Downey has played the title character in Guy Ritchie’s Sherlock Holmes, which earned him his second Golden Glove win, and its sequel, both of which have earned over $500 million at the box office worldwide.

10. His father, Robert Downey Sr., is an actor and filmmaker, while his mother Elsie Ann, was an actress who appeared in Downey Sr.’s films. 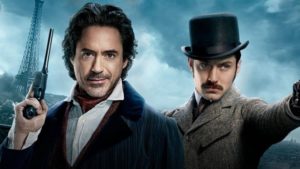 11. Downey’s father is of half Lithuanian Jewish, one quarter Hungarian Jewish, and one quarter Irish descent, while Downey’s mother had Scottish, German and Swiss ancestry.

12. As a child, Downey was surrounded by drugs. His father, a drug addict, allowed Downey to smoke marijuana at the age of six, an incident which his father said that he now regrets.

13. At the age of ten, Downey was living in England and studied classical ballet as part of a larger curriculum.

14. He attended the Stagedoor Manor Performing Arts Training Center in upstate New York as a teenager.

15. When his parents divorced in 1978, Downey moved to California with his father, but in 1982, he dropped out of Santa Monica High School, and moved back to New York to pursue an acting career full time.

16. Downey and Kiefer Sutherland, who shared the screen in the 1988 drama 1969, were roommates for three years before he first moved to Hollywood to pursue his career in acting.

17. On February 13, 1998, Downey got into a fight with another inmate at the Los Angeles County Jail, where he was serving time for a probation violation, and was treated for a cut over his nose. 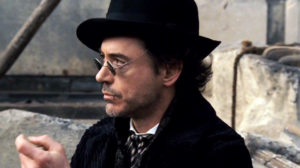 18. In August 1996, during a traffic stop for speeding, Downey was arrested for drunk driving, possession of heroin, and possession of an unloaded gun in his pickup truck. This was his first reported brush with the law at the age of 31. He was given a suspended prison sentence of three years, and granted probation with requirements of random drug testing and drug counselling.

19. He lived with Sarah Jessica Parker for seven years during the 1980s.

20. While drunk, he wandered into a neighbor’s Malibu home that he thought was his own, and fell asleep in their child’s bed. He was arrested for being under the influence of drugs, which was a third violation of his probation.

21. He took daily drug tests during the filming of Two Girls and a Guy.

22. He once worked a piece of living art in a SoHo nightclub in New York City.

23. Downey kept a lot of the authentic vintage clothing that he wore in the movie Chaplin.

24. In a symbolic attempt to bury his decadent 1980s Brat Pack image and begin a new phase of his life and career after filming Chaplin in 1991, he literally buried the clothes that he wore in Less Than Zero in the backyard of his house. 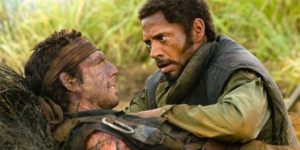 25. He married his first wife after dating her for only 42 days.

26. Downey dropped out of Santa Monica High School at the age of 17 and moved to New York to become an actor. His first jobs in the city included busing tables at Central Falls restaurant, working in a shoe store, and performing as living art in SoHo’s notorious underground club Area.

27. He starred in Elton John’s music video for the song “I Want Love.” Downey was let out of rehab for one day in late July specifically to shoot the video, which was filmed in one long continuous take at Greystone Manor in Beverly Hills.

28. He is childhood friends with Richard Hall, who is better known as Moby.

29. Sting and Billy Idol performed at his wedding to Susan Downey.

30. Downey has worn lifts at his directors’ request in his recent leading man roles, namely Iron Man, and its sequel, and in Sherlock Holmes, in order to enhance his height.