1. Raiders of the Lost Ark originated from George Lucas’ desire to create a modern version of the serials of the 1930s and 1940s.

2. Production was based at Elstree Studios, England, but filming also took place in La Rochelle, France, Tunisia, Hawaii, and California from June to September, 1980.

3. Released on June 12, 1981, Raiders of the Lost Ark became the year’s top-grossing movie and remains one of the highest-grossing movies ever made.

4. Raiders of the Lost Ark was nominated for 8 Academy Awards in 1982, including Best Picture, and won 4 for Best Art Direction, Film Editing, Sound and Visual Effects with a fifth Academy Award: a Special Achievement Award for Sound Effects Editing.

5. Considered one of the greatest films ever made, the film ranked number 7 on Empire’s list of the 100 greatest movies of all time. 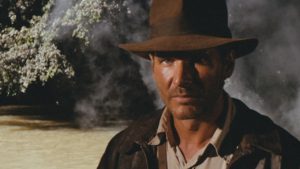 6. In 1999, the movie was included in the United States Library of Congress’ National Film Registry as having been deemed, “culturally, historically, or aesthetically significant.”

7. Freeze-framing during the Well of Souls scene, you can notice a golden pillar with a tiny engraving of R2-D2 and C-3PO from the Stars Wars saga. They’re also on the wall behind Indy when they first approach the Ark.

8. The famous scene in which Indy shoots a marauding and flamboyant swordsman wasn’t in the original script. Harrison Ford was supposed to use his whip to get the sword out of his attacker’s hands, but the food poisoning he and the rest of the crew had gotten, made him too sick to perform the stunt. After several unsuccessful tries, Ford suggested, “shooting the sucker.” Steven Spielberg immediately agreed and the scene was successfully filmed.

9. Most of the body blows you hear were created by hitting a pile of leather jackets with a baseball bat.

10. The movie was originally given an R-rating because of the exploding head at the end. They didn’t want the picture to be rated R, so they added layers of fire in front of his face to make it appear less graphic.

11. During filming in Tunisia, nearly everyone in the cast and crew got sick, except Steven Spielberg. It’s thought that he avoided illness by eating only the food that he’d brought with him, which was cans of Spaghetti-O’s. 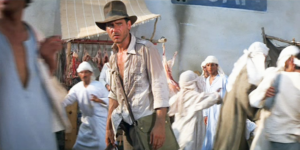 12. Indiana Jones’ kangaroo-hide bull whip was sold in December, 1999, at Christie’s auction house in London for $43,000. His jacket and hat are on display at the Smithsonian.

13. The spirit effects at the climax were achieved by shooting mannequins underwater in slow motion through a fuzzy lens to achieve an ethereal quality.

14. Indy’s line to Marion when they’re on the ship, “It’s not the years, honey, it’s the mileage,” was ad-libbed by Harrison Ford.

15. The out-of-control airplane actually ran over Harrison Ford’s knee, tearing his ligaments. Rather than submit to Tunisian health care, Ford had his knee wrapped in ice and carried on.

16. Renowned British wrestler Pat Roach gets killed twice in the movie, once as a giant Sherpa left in the burning Nepalese bar, and once as the German mechanic chewed up by the plane’s propeller.

17. To create the sound of the heavy lid of the Ark being slid open, Sound Designer Ben Burtt simply recorded him moving the lid of his toilet cistern at home.

18. Despite having George Lucas and Steven Spielberg behind the movie, it was initially turned down by every studio in Hollywood. Only after a lot of persuasion, did Paramount agree to do it. 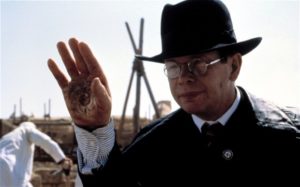 19. Harrison Ford actually outran the boulder in the opening sequence. Because the scene was shot twice from five different angles, he had to outrun it ten times. Ford’s stumble in the scene was deemed to look authentic and was left in.

20. The opening sequence featured live tarantulas on Alfred Molina, but they didn’t move until a female tarantula was introduced.

21. There is a longstanding myth that Jeff Bridges turned down the role of Indy. This isn’t true, it was never even offered to him, which was confirmed in an article by Jake Perlman for Entertainment Weekly in 2014.

22. The Well of Souls sequence was filmed on the set of the Overlook Hotel from The Shining.

23. The instructions for the construction of the Ark, are found in Exodus 25:10. The clothing that Belloq wears while acting as a high priest during the ceremony at the end, is found beginning in Exodus chapter 28.

24. The original name of the lead character in the script was Indiana Smith. However, his name was changed to Jones on the first day of production.

25. During filming of the Well of Souls sequence, one of the pythons died after being bitten by one of the cobras.

26. Raiders of the Lost Ark is the only Indiana Jones film in the franchise to be nominated for a Best Picture Oscar.

27. The sacred idol of the Hovitos, of which Dr. Jones takes possession at the beginning of the movie, is apparently a fertility goddess. It’s a molten image of a woman squatting down and giving birth.

28. When Indy’s hat was made, the brim was shaped to cover his eyes for protection, and to help hide faces when stunt doubles were being used.

29. Steven Spielberg originally wanted Danny DeVito to play Sallah, and DeVito was set for the role, but he had to drop out, due to conflicts with Taxi. DeVito later appeared as a second banana to Michael Douglas in the Raiders tribute and derivatives, Romancing the Stone.

30. To get the sound of thousands of snakes slithering, Ben Burtt stuck his fingers into a cheese casserole. This was augmented by applying wet sponges to the grip tape on a skateboard.