1. The movie follows the recruitment and training of Gary “Eggsy” Unwin into a secret spy organization. Eggsy joins a mission to tackle a global threat from Richmond Valentine, a wealthy megalomaniac.

4. In 2015, Kingsman: The Secret Service won the Empire Award for Best British Film.

5. Colin Firth did 80% of his own stunts, according to Stunt Coordinator and Second Unit Director Bradley James Allan. 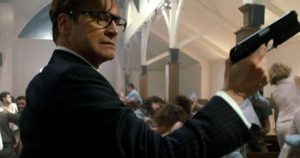 6. All the action in the movie is framed centrally. This means that your eyes never need to leave the center of the frame.

7. Colin Firth worked out for around six months to be in top fighting shape and physical form in order to portray gentleman spy Galahad.

8. During, and in the lead-up to, the First and Second World Wars, the British Intelligence Services often used tailor shops as fronts for their activities.

9. A full Kingsman Secret Service menswear line was created and crafted especially for the movie, with tailoring and manufacturing by some of Britain’s most elite, famous and trusted clothing brands.

10. In the movie, Professor James Arnold is played by Mark Hamill. In the comic series, Hamill is the first celebrity kidnapped by Dr. Arnold.

11. Actress Sofia Boutella had to undergo an intense training schedule to portray the part of Gazelle. Boutella has said: “They taught me Thai boxing, teakwondo, and how to work with cables. Gazelle uses her legs to kill, so I had to learn different types of kicks. I’d never done anything like it before.” 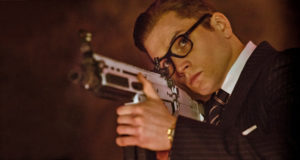 12. Matthew Vaughn wanted the character of Merlin to have a Welsh accent, but Mark Strong found the accent too challenging, and persuaded Vaughn to let him use a Scottish accent instead.

13. If you go to 11 Savile Row on Google Maps Street View, you can actually walk inside Huntsman and Sons. Before you enter however, not the “Kingsman” symbol in the right bottom corner of the front window, and when you go directly to the back of the shop, on the wall in the left hand corner is a picture of Colin Firth, wearing their suit.

14. When the Kingsman recruits are going through the basic training program, they still look good, and wear what are known as “siren suits.” These outfits were inspired by the one piece garment famously worn by former British Prime Minister Winston Churchill.

15. One of the objectives of the studio and the filmmakers was for the movie to be the first film in a franchise. Matthew Vaughn said: “Well, that’s the plan… otherwise someone’s going to lose a lot of money!”

16. Taron Egerton got up to 194 pounds and just five percent body fat for the movie. He felt it was, “necessary to show muscle definition if you are going to save the world.”

17. The church fight action sequence took seven days to shoot, while the underwater dormitory sequence was complex, and complicated to film, and took around a week and a half to complete. 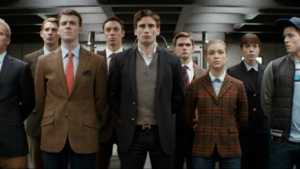 18. The classic British Gentleman’s Wardrobe, featured in the movie, is a 60 piece collection that includes suits, watches, ties, umbrellas, briefcases, and more. Some movie posters for the picture feature the whole of the arsenal.

20. The phrase that Hart quotes before the bar fight, “manners maketh man,” is the motto of British schools Winchester College and Urmston Grammar School.

21. It’s commin in American movie for the villains to be portrayed with an English accent. However, in Kingsman: The Secret Service, the villain is distinctly American, whereas the hero is English.

22. Emma Watson and Bella Heathcote were considered for the female lead role of “Roxy,” which in the end was cast with newcomer Sophie Cookson.

23. Every piece of bespoke designed chattel and apparel featured in the movie carries a “Kingsman” branding designer label.

24. The production wanted the movie to the “The Best of British.” Paul Kirby has said that you can’t do a British spy movie, “without considering Bond,” and that the picture they wanted to make, is a pantomime of the Roger Moore era Bond movies. Kirby added: “James Bond has gone a little bit dull, while they chase the Bourne franchise.” 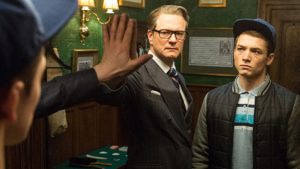 25. More than 60 young actors were screen-tested by Matthew Vaughn, for the role of Gary “Eggsy” Unwin, which in the end, was cast with Taron Egerton.

26. The Kingsman comic book was originally supposed to be about the U.S. Secret Service, who call themselves “UNCLE SAM.”

29. The last name of the main villain is “Valentine.” Coincidentally, the movie’s United States release date was on Valentine’s Day weekend.

30. Kingsman: The Secret Service is the third Matthew Vaughn movie to have a score composed by Henry Jackman.