Jumanji: Welcome to the Jungle is a 2017 American adventure comedy movie directed by Jake Kasdan and written by Chris McKenna, Erik Sommers, Scott Rosenberg, and Jeff Pinkner, from a story by McKenna. The movie is part of the Jumanji franchise, serving as a sequel to Jumanji, which is based on the 1981 children’s book of the same name by Chris Van Allsburg. Take a look below for 30 more fun and interesting facts about Jumanji: Welcome to the Jungle.

2. Set 21 years after the first movie, the plot follows four teenagers who are transported into the video game world of Jumanji, playing as the characters they choose. Uniting with another player, they have to overcome the game’s magical power in order to win and return home.

3. The statues in the jungle set are modeled after the board game pieces in the first movie.

4. Jack Black jokes that he wasn’t acting in the scenes where his character was infatuated with Dwayne Johnson’s character. He was in fact actually infatuated and the cameras just kept on rolling.

5. Dwayne Johnson said that if he could play any other role in the movie, he’d play Bethany: “I know how much fun [Jack] had every day playing a 16 year old self obsessed girl.” 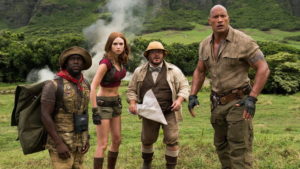 6. The movie’s African jungle setting was shot in Hawaii.

7. Mouse Finbar wears a little badge with the picture of a slice of cake and a line going across it, a nod to the fact that his character’s weakness is cake. The badge can be seen on the lower left side of his vest.

8. Tom Holland was originally cast as Seaplane McDonough, but had to drop out of the movie because he was busy with Spider-Man: Homecoming.

9. Dwayne Johnson and Kevin Hart are known for their intensive workout routines, but it was Gillan, whose character is an expert in various martial arts and “dance fighting”, who did the most extensive work with the stunt team to learn the fight choreography for her scenes.

10. Ruby Roundhouse’s outfit was influenced by Lara Croft, the protagonist of the Tomb Raider video games and movies. Martha comments on how impractical the outfit it to wear in the jungle. 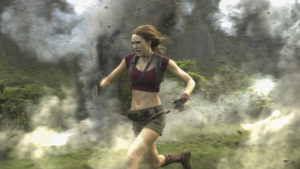 12. In the aftermath of Jumanji actor Robin Williams’s suicide, many people spoke out against the movie. However, the crew assured everyone that the movie would provide a great tribute to Williams.

13. During the Bazaar scene, while fighting and calling out his actions, Dwayne Johnson dispatches one of Van Pelt’s henchmen by using his wrestling finisher, the Rock Bottom.

14. A poster for the video game Uncharted 4: A Thief’s End hangs in Spencer’s room, whose score was also composed by Henry Jackman.

15. All the Brentford High School scenes were shot at the same school that Goosebumps was filmed in, which also starred Jack Black.

16. Karen Gillan thought that Ruby’s look was a lot of fun, stating, “It was interesting to highlight the familiar trope, particularly from the 90s video games, of the way women were portrayed in those games.”

17. Dwayne Johnson pitched the name “Smolder” to Jake Kasdan through text. He said, “What if his name was Smolder, but he had this unique ability to just Smolder. And he’s like, I love it.”

18. In researching the character of Bethany, Jack Black went to Madison Iseman, asking about her favorite music and TV shows. He watched and listened and got into that head space. 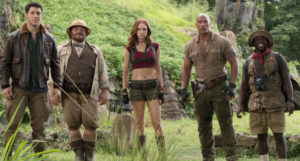 19. Kevin Heart and Dwayne Johnson credit their on screen chemistry to their off screen friendship.

20. Karen Gillan is from Scotland so she had to employ an American accent in order to play Martha.

22. Kevin Hart was sick during the filming of the helicopter scene.

23. The football player’s nickname, “Fridge,” is a nod to American football player William Perry, who was known as “The Refrigerator,” or “The Fridge.”

24. Alex’s tree house was an actual tree house built around a sprawling Banyan tree and hidden in the jungle foliage. 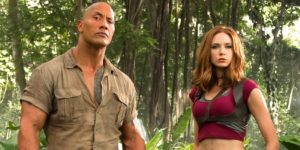 25. To film the Albino Rhino scene, the cast spent days harnessed into a full-size, customized helicopter mounted on a special effects gimbal rig elevated 20 feet in the air.

26. The stunt team says that the Brazilian fighting style Capoeira is probably the most comparable to Ruby’s special powers, and that they intended to combine several martial arts techniques to create their own moves, part dancing, part lethal fighting.

27. Out of respect for the wildlife, the animal skinned wardrobe items worn by Van Pelt’s goons were made from synthetic materials.

28. Dr. Bravestone’s utility belt was partly based on the belt that Nathan Drake from the Uncharted series wears.

29. The game Spencer was shown playing in his bedroom at the beginning of the movie was Street Fighter V.

30. James Newton Howard was originally announced as the movie’s composer, but had to leave due to scheduling conflicts.