Emma Charlotte Duerre Watson, born April 15, 1990, is a British actress, model and activist. Born in Paris and raised in Oxfordshire, Watson attended the Dragon School and trained as an actress at the Oxford branch of Stagecoach Theater Arts. Take a look below for 30 more fun and interesting facts about Emma Watson.

1. She rose to prominence after landing her first professional acting role as Hermione Granger in the Harry Potter movies, having acted only in school plays previously.

2. Watson appeared in all eight Harry Potter movies from 2001 to 2011, earning worldwide fame, critical accolades and around $60 million.

3. From 2011 to 2014, Watson split her time between working on film projects and continuing her education, studying at Brown University and Worcester College, Oxford and graduating from Brown with a bachelor’s degree in English literature in May, 2014.

4. As a fashion consultant, she helped create a line of clothing for People Tree.

5. She was honored by the British Academy of Film and Television arts in 2014, winning for British Artist of the Year. 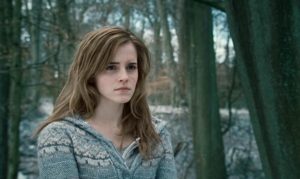 6. In 2014, Watson was appointed as a UN Women Goodwill ambassador and helped launch the UN Women campaign HeForShe, which calls for men to advocate gender equality.

8. She served on a jury to select the 2004 teen-aged filmmakers’ First Light Film Awards. The ceremony was held in London’s Leicester Square. Other jurors included Pierce Brosnan, Kenneth Branagh and Samantha Morton.

9. She was named after her paternal grandmother, born Freda Emma Duerre who, after marriage, became Fred Emma Duerre Watson.

10. At the age of 15, she became the youngest person to appear on the cover of Teen Vogue Magazine.

11. She and her Harry Potter co-stars Daniel Radcliffe and Rupert Grint were number number nine on Entertainment Weekly’s Best Entertainers of the Year in 2005. 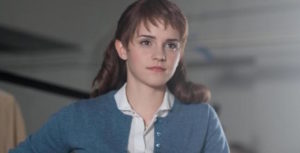 13. Watson is a fan of The Golden Compass and the rest of the fantasy trilogy “His Dark Materials” by Philip Pullman.

14. Her parents divorced in 1995; each parent has since remarried. On her father’s side, she has a younger half-brother, Toby, born in 2003, and half-sisters, identical twins Lucy and Nina, who were born in 2004. Lucy and Nina played the younger version of her character Pauline in Ballet Shoes. She also has two stepbrothers through her mother’s remarriage.

15. In 2008, BoyDestiny wrote a sang the song “You Got Me Going,” which is also known as The Emma Watson Song.

16. She was named the Highest Grossing Actress of the Decade by the Guinness Book of World Records. Her film work in the past decade has grossed over $5.4 billion worldwide.

17. When she made a promotional appearance on a Dutch TV talk show for Harry Potter and the Order of the Phoenix, the interview ended with her joining the Dutch illusion act Magic Unlimited, who sawed her in half.

18. She is best friends with Harry Potter co-stars Daniel Radcliffe and Rupert Grint after practically growing up with them on the Harry Potter set. She calls them her “brothers.” 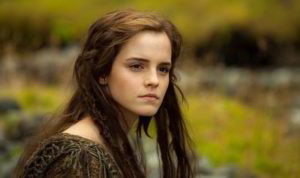 20. Watson was offered the titled lead in Cinderella but turned it down.

23. Emma Watson has stated that, since her audition at age 9 through the completion of 8 Harry Potter features by age 22, the hectic, educational experience consumed over half her life.

24. She includes Justin Timberlake and Alanis Morissette among her favorite singers.

25. Watson has kept a painstakingly detailed log of her everyday life since her film career took off. She has as many as 30 journals in total. 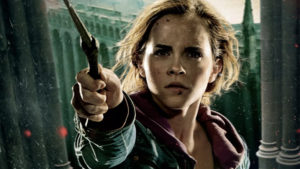 26. She was offered the role of Mia in “La La Land” but turned it down to play Belle in “Beauty and the Beast.” The role went to Emma Stone, who won an Academy award for her performance.

27. Watson auditioned eight times, at the age of 9, for the role of Hermione Granger in the Harry Potter movies, playing opposite five prospective sets of harry’s before landing the part.

28. She has the same birthday as her Beauty and the Beast co-star Luke Evans.

29. She has combined type ADHD and has been taking Ritalin for it since childhood.

30. While working on the movie Noah, Watson was questioned about her faith and she described herself as a spiritual Universalist.