Edward Joseph Snowden is an American computer professional, former Central Intelligence Agency employee, and former contractor for the United States government who copied and leaked classified information from the National Security Agency in 2013 without authorization. Take a look below for 30 more fun and interesting facts about Edward Snowden.

1. His disclosures revealed numerous global surveillance programs, many run by the NSA and the Five Eyes Intelligence Alliance with the cooperation of telecommunication companies and European governments.

2. In 2013, Snowden was hired by an NSA contract, Booz Allen Hamilton, after previous employment with Dell and the CIA.

3. On May 20, 2013, Snowden flew to Hong Kong after leaving his job at the NSA facility in Hawaii, and in early June, he revealed thousands of classified NSA documents to journalists Glenn Greenwald, Laura Poitras, and Ewen MacAskill.

4. Snowden came to international attention after stories based on the material appeared in The Guardian and The Washington Post. Further disclosures were made by other publications including Der Spiegel and The New York Times.

5. On June 21, 2013, the U.S. Department of Justice unsealed charges against Snowden of two counts of violating the Espionage Act of 1917 and theft of government property following which the Department of States revoked his passport. 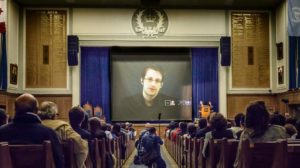 6. Two days later, he flew into Moscow’s Sheremetyevo Airport, but Russian authorities noted that his U.S. passport had been cancelled and he was restricted to the airport terminal for over one month.

7. Russia ultimately granted him right of asylum for one year, and repeated extensions have permitted him to stay at least until 2020.

8. In early 2016, he became the president of the Freedom of the Press Foundation, an organization that aims to protect journalists from hacking and government surveillance.

9. As of 2017, he was living in an undisclosed location in Moscow and continuing to seek asylum elsewhere in the world.

10. A subject of controversy, Snowden has been variously called a hero, a whistleblower, a dissident, a traitor and a patriot.

11. His disclosures have fueled debates over mass surveillance, government secrecy, and the balance between national security and information privacy. 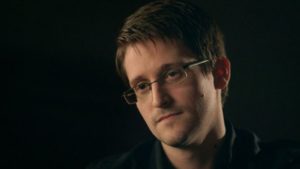 13. His maternal grandfather, Edward J. Barrett, was a rear admiral in the United States Coast Guard who became a senior official with the FBI and was at the Pentagon on September 11, 2001, when it was struck by an airliner hijacked by al-Qaeda terrorists.

14. Snowden’s father, Lonnie Snowden, was also an officer in the Coast Guard, and his mother, Elizabeth B. Snowden, is chief deputy at the United States District Court for the District of Maryland.

16. In the early 1990s, while still in grade school, he moved with his family to Fort Meade, Maryland.

18. Although Snowden had no undergraduate college degree, he worked online toward a master’s degree at the University of Liverpool, England, in 2011.

19. Snowden was reportedly interested in Japanese popular culture, had studied the Japanese language, and worked for an anime company that had a resident office in the United States.

20. He had a basic understanding of Mandarin Chinese and was deeply interested in martial arts.

21. At the age of 20, he listed Buddhism as his religion on a military recruitment form, noting that the choice of Agnostic was absent.

22. Snowden said that in the 2008 presidential election, he voted for a third-party candidate. He has stated that he had been planning to comment on NSA surveillance programs at the time, but he decided to wait because he, “believed in Obama’s promises.”

23. Snowden was voted as The Guardian’s person of the year 2013, garnering four times the number of votes than any other candidate.

24. The 2013 list of leading Global Thinkers, published annually by Foreign Policy, placed Snowden in first place due to the impact of his revelations.

25. Snowden was named Time Magazine’s Person of the Year runner-up in 2013, behind Pope Francis. Time was later criticized for not placing him in the top spot.

26. In 2014, Snowden was named among Time Magazine’s 100 Most Influential People in the World. 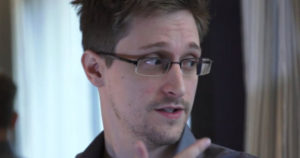 27. In July 2014, Freie Universitat Berlin announced that Snowden had accepted its offer of honorary membership in recognition of what the university called, “his extraordinary achievements in defense of transparency, justice and freedom.” Apart from the honor, there are no rights, privileges or duties involved.

29. On March 19, 2016, Snowden delivered the opening keynote address of the LibrePlanet conference, a meeting of international free software activists and developers presented by the Free Software Foundation.

30. On July 21, 2016, Snowden and hardware hacker Bunnie Huang, in a talk at MIT Media Lab’s Forbidden Research event, published research for a smartphone case, the so-called Introspection Engine, that would monitor signals received and sent by that phone to provide an alert to the suer if their phone is transmitting or receiving information when it shouldn’t be.