2. In Captain American: Civil War, disagreement over international oversight of the Avengers fractures them into opposing factions, one led by Steve Rogers and the other by Tony Stark.

4. The day before filming a fight scene with Robert Downey Jr., Sebastian Stan sent him a video of himself doing intense bicep curls in front of the decapitated head of an Iron Man suit. He attached the message, “Looking forward to our scene tomorrow Robert.”

5. The finalists for the Spider-Man role did separate screentests with Chris Evans and Robert Downey Jr., with the intent of seeing whose chemistry fit the best with both Evans and Downey. 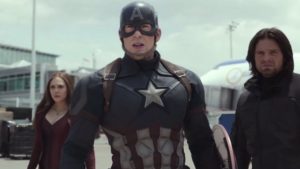 6. Tom Holland commented on how intimidated he was when he came to screentest for Spider-Man, saying that Robert Downey Jr. took him aside and said, “Listen, I remember my screentest for Iron Man. I remember how terrified I was. Just think of it as an audition. It’s nothing too scary. If you get it wrong, we’ll just start again. No pressure.”

8. When the production of the movie wrapped up, Sebastian Stan and Anthony Mackie raced each other while in their superhero suits.

9. In the movie, the Falcon utilizes a falcon drone called Redwing. In the mainstream Marvel comics, Redwing was an actual falcon, which was Sam Wilson’s sidekick.

10. Chris Evans revealed that he was hesitant to take the role of Captain America early on, but now considers it one of the best decisions he has ever made.

11. One scene shows Ant-Man being boosted by an arrow from Hawkeye. This scene is taken directly from the comics, specifically The Avengers #223.

12. Spider-Man was very nearly removed from the movie, as Sony Pictures originally rejected Marvel’s proposal to allow them a cut of the profit if they could pull Spider-Man over, but Sony Corporation expressed disappointment in the financial returns and the critical reception of The Amazing Spider-Man series and decided to negotiate a deal again. 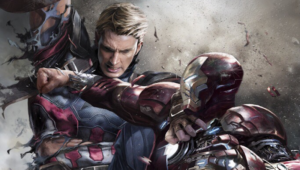 13. Tom Holland is the youngest person to portray Spider-Man on screen, at 19 years old.

14. Samuel L. Jackson was surprised to find that Nick Fury wasn’t in the movie after the Russo brothers told him that he was. Executive Producer Nate Moore stated that Fury wasn’t included, “because he didn’t add anything to the Civil War story they were telling.”

15. Robert Downey Jr. acted as the younger Tony Stark along with John Slattery and Hope Davis. Lola FX provided the “de-aging” visual effects on the face and hair of Downey with footage and photos of his early career as references.

17. In an interview, Daniel Bruhl said that the budget for Captain America: Civil War was so huge, that you could make 20 movies from it.

18. Anthony Mackie described the movie as “The Avengers: Part 2.5.” Jeremy Renner said that it would be like an Avengers movie, due to a lot of the characters being involved.

19. Captain America: Civil War is the live action debut of T’Challa, the Black Panther, one of the first black superheroes in American comic books. 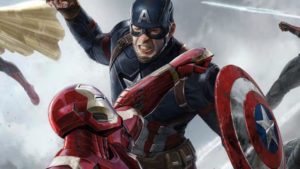 21. The Black Panther costume is a combination of a practical costume and visual effects.

23. Spider-Man’s suit design is based on his original look in the comics when he debuted in 1962. The goggles change size to reflect Spider-Man’s expressive eyes in the comics, and also allow him to hone his senses and focus.

24. In the Civil War comic books series, Tony Stark builds Spider-Man an “Iron Spider” suit. It’s red and gold, and laden with armor and gadgets. In the movie, Spider-Man receives a suit in his normal red and blue cloth attire, but it does have gadgets.

25. The title of the movie was jokingly announced as “Captain America: Serpent Society” during the announcement of Marvel Phase 3. 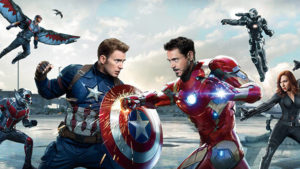 26. A large part of the movie is set in Romania, where Sebastian Stan, who plays Bucky Barnes, was born.

27. Unlike her previous Marvel movies, Scarlett Johansson never appeared for interviews, premieres, press conferences or any other events to promote the movie.

28. The Spider-Man suit in Captain America: Civil War was influenced by Steve Ditko and John Romita Sr. The extra dark shading around the eyes and web cartridges on his belt are few of the minor updates.

29. Captain America: Civil War is the fourth movie in the Marvel Cinematic Universe to gross one billion dollars.

30. The Wakandan language spoken by King T’Chaka and Prince T’Challa is Xhosa, a native language of many South Africans.