Avengers: Age of Ultron is a 2015 American superhero movie based on the Marvel Comics superhero team the Avengers, produced by Marvel Studios and distributed by Walt Disney Studios Motion Pictures. It’s the sequel to 2012’s The Avengers and the 11th movie in the Marvel Cinematic Universe. Take a look below for 30 more fun and interesting facts about Avengers: Age of Ultron.

4. James Spader was Joss Whedon’s first and only choice for the role of Ultron, because of his, “hypnotic voice that can be eerily calm and compelling, while also being very human and humorous.”

5. On James Spader’s first day on-set, the cast was so impressed by his performance, that they applauded and cheered for him after his first take. 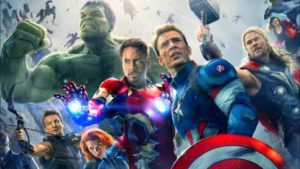 6. Aaron Taylor-Johnson was asked to lose weight, muscle mass in particular, because he looked too strong to portray a runner, who is usually trim.

7. Joss Whedon has said that he wanted both Spider-Man and Captain Marvel to appear in the final sequence, but they were unable to due to timing issues.

8. The trailer was viewed 34 million times on YouTube in the first 24 hours after it was released. This broke the record that was previously held by Iron Man 3.

9. James Spader uses his natural speaking voice for Ultron, with no accent or alteration of his voice.

10. James Spader described Ultron as self-absorbed and immature: “He sees the world from a very strange, biblical point of view, because he’s brand new, he’s very young. He’s immature, and yet has knowledge of comprehensive, broad history and precedent, and he has created in a very short period of time, a rather skewed worldview.”

11. The scene where Ultron commands his drones to fly down and latch themselves onto the truck in Seoul, took 360 days to complete. It was handled by only one animator, who upon completion of the scene, received a party, and a bottle of champagne for his efforts. 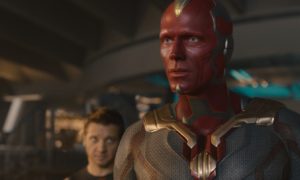 12. James Spader was originally just going to be Ultron’s voice, but he told the filmmakers that for a main character, he deserved to do more than provide a voice, and so he took on performing Ultron through motion-capture.

13. Chris Evans and Chris Hemsworth have stated in separate interviews that Joss Whedon initially hadn’t told them the arc of the plot, with Evans claiming that he didn’t even know the title of the movie until the official announcement at Comic-Con. Additionally, Hemsworth and Cobie Smulders have both admitted to not knowing who Ultron is.

14. Elizabeth Olsen and Aaron Taylor-Johnson consulted each other, before accepting the roles of Scarlet Witch and Quicksilver. The two became friends while filming Godzilla, and as soon as they found out that both had offers, they called each other to check if the other was doing it, before singing on.

15. Bruce Banner’s creation that houses houses the extra Hulkbuster parts, Veronica, is named that, as an in-joke, based on the Archie comics. Archie Andrews is always torn between the two women that love him, Betty and Veronica. Banner already had a girlfriend, Betty Ross, so this armor was named Veronica, as a contrast to Banner’s alternate personality, the Hulk.

16. Quicksilver’s running visual effects were created by first filming with an ultra high speed camera, and then filming Aaron Taylor-Johnson running in the same scene at regular speed, and then digitally splicing the two scenes together.

17. When Elizabeth Olsen and Aaron Taylor-Johnson learned that their roles Wanda and Pietro Maximoff would be based on their Marvel Ultimates version, they both read and studied every single issue, in order to prepare for the role. 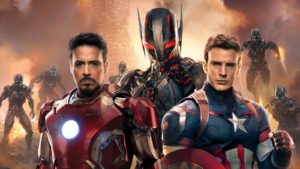 18. Elizabeth Olsen worked with a dance choreographer to make her movements more graceful for action sequences.

20. The movie has the most visual effects shot for any Marvel movie to date, with over 3,000. Previously, Guardians of the Galaxy held the record with 2,750.

21. Avengers: Age of Ultron is the first time in the Marvel Cinematic Universe that Thor appears in a movie without Loki. Tom Hiddleston did film a scene, reprising Loki, but it was ultimately cut from the final version, as Joss Whedon felt it didn’t play well with the movie as a whole.

22. Joss Whedon described Ultron as a perfect villain for the Avengers: “He’s got a bee in his bonnet, and he’s always trying to destroy the Avengers! He’s not a happy guy, which means that he’s an interesting guy. He’s got pain.” 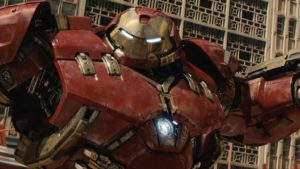 24. The movie marks the first Marvel Cinematic Universe appearance of Tony Stark without Pepper Potts, with the exception of his cameo role in The Incredible Hulk.

26. Elizabeth Olsen stated in an interview that she is happy that her character’s outfit isn’t accurate to the comic book, as it would be inappropriate for combat.

27. Approximately 200 German small town movie theaters boycotted the movie upon its release, after Disney announced that they demanded 53% of ticket sales, as movie rent, without taking into account the smaller sizes of small town venues.

28. The first word spoken in the movie by an Avenger is “shit.”

29. Joss Whedon wanted to get a number of different looks, textures and moods to give the movie a different and fresh aesthetic from its predecessor, so he shot in different locations around the world, including South Africa, England, Italy and South Korea.

30. To keep production a secret, the working title for the movie was “After Party.”