Sir Arthur Ignatius Conan Doyle was a British writer best known for his detective fiction featuring the character Sherlock Holmes. Originally a physician, in 1887 he published A Study in Scarlet, the first of four novels about Holmes and Dr. Watson. Take a look below for 30 more fun and interesting facts about Arthur Conan Doyle.

2. The Sherlock Holmes stories are generally considered milestones in the field of crime fiction.

3. Doyle was a prolific writer. His non-Sherlockian works include fantasy and science fiction stories about Professor Challenger and humorous stories about the Napoleonic soldier Brigadier Gerard, as well as plays, romances, poetry, non-fiction and historical novels.

4. One of Doyle’s early short stores, J. Habakuk Jephson’s Statement, helped to popularize the mystery of the Mary Celeste.

5. His first jobs were the medic on-board a whaling ship to the Arctic Circle and as a medical officer on-board a steamship to in Africa.

6. Doyle was an avid cricket player and have even stated to have named Sherlock after a cricketer who played for Northampton.

7. At the time Doyle wrote The Lost World, the term dinosaur hadn’t even been around for two centuries. The book was hugely influential, cementing the idea of dinosaurs in fiction and inspiring a whole host of novels and movies.

8. In 1893, Doyle killed off Sherlock Holmes, hoping to concentrate on more serious writing. However, a public outcry made him resurrect the famous detective.

9. In 1823, Doyle moved to Davros, Switzerland, where he helped popularize skiing.

10. Doyle was the first Englishman to document the thrill of skiing. He said, “You let yourself go. Getting as near to flying as any earthbound man can. In that glorious air it is a delightful experience.” 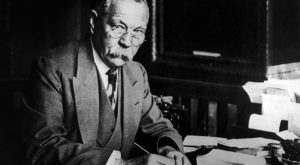 11. He correctly predicted that in the future, hundreds of Englishmen would come to Switzerland for skiing season.

12. Under the pseudonym AC Smith, he played as a goalie for the amateur side of Portsmouth Association Football Club.

13. Doyle ran for parliament, representing the Unionist Party, once in Edinburgh, in 1900, and once in the Border Burghs, in 1906.

14. When Doyle obtained his Bachelor of Medicine and Master of Surgery degree, he drew a funny sketch of himself receiving his diploma, with the caption “Licensed to Kill.” This became the tagline for James Bond.

16. His last words were addressed to his wife. He whispered, “You are wonderful.”

17. When a photograph surfaced purportedly showing a young girl surrounded by fairies, Doyle enthusiastically hailed its authenticity and believed that it was clear evidence of psychic phenomena.

18. He wrote a book about fairies called The Coming of the Fairies.

19. While he started an ophthalmology practice in London, not a single patient ever crossed his door, which is what made Doyle start writing in the first place. 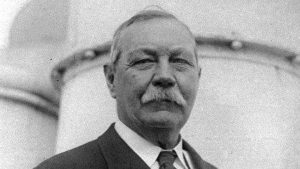 20. At one point, he was friends with the famous illusionist Harry Houdini.

22. In 1902, King Edward VII knighted Doyle because of his book that justified Britain’s involvement in the Boer War.

23. His father, Charles Altamont Doyle, was born in England, of Irish Catholic descent, and his mother, Mary, was Irish Catholic.

24. His parents married in 1855. In 1864, the family dispersed because of Charles’s growing alcoholism, and the children were temporarily housed across Edinburgh.

25. In 1867, the family came together again and lived in squalid tenement flats at 3 Sciennes Place. 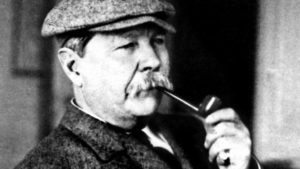 26. Doyle’s father died in 1893, in the Crichton Royal, Dumfries, after many years of psychiatric illness.

27. Supported by wealthy uncles, Doyle was sent to England, at the Jesuit preparatory school Hodder Place, Stonyhurst in Lancashire at the age of nine.

28. Later on in his life, he rejected the Catholic faith and became an agnostic. He also later became a spiritualist mystic.

29. Carved wooden tablets to his memory and to the memory of his wife, originally from the church at Minstead, are on display as part of a Sherlock Holmes exhibition at Portsmouth Museum.

30. A statue honors Doyle at Crowborough Cross in Crowborough, where he lived for 23 years.