Alexander III of Macedon, commonly known as Alexander the Great, was a king of the ancient Greek kingdom of Macedon and a member of the Argead dynasty. He was born in Pella in 365 BC and succeeded his father Philip II to the throne at the age of 20. He spent most of his ruling years on an unprecedented military campaign through Asia and northeast Africa, and he created one of the biggest empires of the ancient world by the age of 30, stretching from Greece to northwestern India. Take a look below for 30 more fun and interesting facts about Alexander the Great.

1. He was undefeated in battle and is widely considered one of history’s most successful military commanders.

2. During his youth, Alexander was tutored by Aristotle until the age of 16.

3. After Philip’s assassination in 336 BC, he succeeded his father to the throne and inherited a strong kingdom and an experienced army.

4. Alexander was awarded the generalship of Greece and used his authority to launch his father’s pan-Hellenic project to lead the Greeks in the conquest of Persia.

5. In 334 BC, he invaded the Achaemenid Empire and began a series of campaigns that lasted ten years. 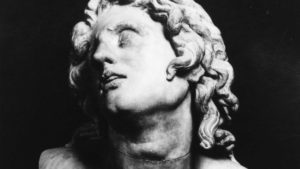 6. Following the conquest of Anatolia, Alexander broke the power of Persia in a series of decisive battles, most notably the battles of Issus and Gaugamela.

7. Alexander overthrew the Persian King Darius III and conquered the Achaemenid Empire in its entirety. At that point, his empire stretched from the Adriatic Sea to the Indus River.

8. He endeavored to reach the, “ends of the world and the Great Outer Sea,” and invaded India in 326 BC, winning an important victory over the Pauravas at the Battle of the Hydaspes.

9. Alexander died in Babylon in 323 BC, the city that he planned to establish as his capital, without executing a series of planned campaigns that would have begun with an invasion of Arabia.

10. In the years following his death, a series of civil wars tore his empire apart, resulting in the establishment of several states ruled by the Diadochi, Alexander’s surviving generals and heirs.

11. His legacy includes the cultural diffusion and syncretism, which his conquests engendered, such as Greco-Buddhism.

12. He founded some twenty cities that bore his name, most notably Alexandria in Egypt.

13. Alexander’s settlement of Greek colonists and the resulting spread of Greek culture in the east resulted in a new Hellenistic civilization, aspects of which were still evident in the traditions of the Byzantine Empire in the mid-15th century AD and the presence of Greek speakers in central and far eastern Anatolia until the 19202.

14. Alexander became legendary as a classical hero in the mold of Achilles, and he features prominently in the history and mythic traditions of both Greek and non-Greek cultures.

15. He became the measure against which military leaders compared themselves, and military academies throughout the world still teach his tactics.

16. Alexander the Great is often ranked among the most influential people in history.

17. His name comes from the Greek alexo, meaning “defend,” and andr, meaning “man,” therefore his name means “protector of men.”

18. Alexander’s mother, Olympias, was the daughter of Neoptolemus I, king of the Molossians, an ancient Greek tribe in Epirus. 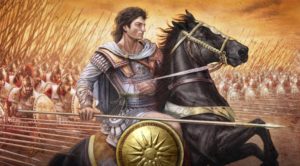 19. While there is some controversy over Alexander’s sexuality, he did have three wives: Roxane, Statiera and Parysatis.

20. It’s believed that Alexander had two children: Herakles, a son with his mistress Barsine, and Alexander IV, his son by Roxane. Unfortunately, after his death, both of his children were murdered before they could reach adulthood.

21. He was one of the most admired historical figures in Rome, even many years after his death. This is why rulers like Julius Caesar, Mark Antony, and Augustus made pilgrimages to Alexander’s tomb in Alexandria.

22. One of the most famous legends about Alexander is that in 333, when he was in Gordium, in Asia Minor, he undid the Gordian knot. The prophecy about the Gordian knot said that he who untied it would rule all of Asia. Alexander is said to have undone the know by slashing through it with a sword. It’s believed that the man who tied the know was either Midas of Golden Touch or his father, Gordius.

23. Three of Fidel Castro’s sons are named after Alexander the Great: Alexis, Alejandro and Alexander.

24. Alexander once held a drinking contest among his soldiers. When it was over, 42 soldiers had died from alcohol poisoning. 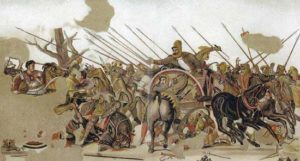 25. After defeating the Persians, Alexander started dressing like a Persian king and had two Persian wives s that the newly conquered people would feel more comfortable with their new leader.

26. Even though there have been many theories throughout the years, the real cause of Alexander’s death remains a mystery. In modern times, medical experts have claimed that malaria, lung infection, liver failure, or typhoid may have been the causes, but no one can say for sure.

27. The Iliad and the Odyssey were his favorite books. Since childhood, he was inspired by Homer‘s heroes and slept with the Iliad under his pillow.

28. His biggest idol and influence was Heracles, or Hercules. His admiration for the most famous Greek mythological figure of all time was so deep that he called himself the son of Zeus, just like Hercules, and always bragged that he was descended from Heracles on his father’s side.

29. He washed his hair on a daily basis in saffron to keep it shiny and orange. Saffron was extremely rare at the time and a little more expensive than gold.

30. Alexander had heterochromia iridum, which means that one of his eyes was blue and the other was brown.