2. In Guardians of the Galaxy, Peter Quill forms an uneasy alliance with a group of extraterrestrial misfits who are fleeing after stealing a powerful artifact.

4. When Dave Bautista found out that he got the role of Drax the Destroyer, he broke down in tears, overjoyed at getting a Marvel comic book role. He prepared for the role with an acting coach.

5. Chris Pratt apparently stole his Star-Lord costume from the set, for the sole purpose of having it available so he could show up in costume to visit sick children in the hospital, who might want to meet Star-Lord. 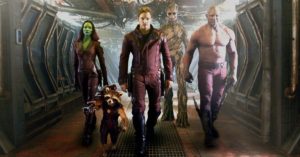 6. Vin Diesel recorded all of his lines in several different languages, including Russia, Mandarin, Spanish, Portuguese, German and French, so that they could use his real voice in the movie around the world.

7. James Gunn stated that Chris Pratt’s audition was so good that he was prepared to offer him the role, even if Pratt didn’t lose weight, or get in shape in time. Gunn joked that he was willing to CGI a sick-pack on Pratt’s body. However, Pratt asked Gunn to give him six months to lose 50 pounds, and he ended up losing 60.

8. The soundtrack album “Awesome Mix, Vol. 1” reached number one on the U.S. Billboard 200 chart, the first movie soundtrack ever to do so without any original music. It was also nominated for the 2015 Grammy Award for Best Soundtrack.

9. According to Vin Diesel, the voice of Groot, he recorded Groot’s iconic line, “I am Groot,” over one thousand times.

10. The scene where Peter drops the orb during the Collector scene wasn’t scripted. According to the commentary, Chris Pratt accidentally dropped it during filming, but remained in character through the whole thing, so it stayed in the final film.

11. Bradley Cooper told Howard Stern that he was paid more for voicing Rocket in this movie than for starring in Silver Linings Playbook and The Hangover combined. 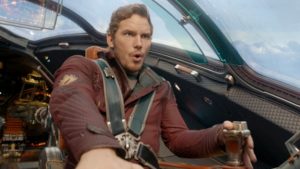 12. Chris Pratt cites heroes Han Solo and Marty McFly as influences on his performance as Star-Lord.

13. According to James Gunn, Star-Lord’s obscene gesture was an improvisation by Chris Pratt.

14. James Gunn has confirmed, via Twitter, that Peter Quill’s ship in the movie is named The Milano after Alyssa Milano, Peter Quill’s childhood crush.

15. The cassette player used by Peter Quill was the Sony TPS-L2. It was the first personal cassette player released in 1979. It was originally called the “Soundabout,” then changed to “Walkman.”

16. When arrested, Rocket’s attributes list his known associates: Groot and Lylla. Lady Lylla is a Sentient Otter and soulmate to Rocket in the Marvel Universe.

17. Drax’s comment about Groot’s ability to release “fireflies,” “When did you learn to do that?”, is an inside joke, as Groot has never shown this ability in the comic books.

18. Zoe Saldana wanted to portray Gamora through makeup, rather than computer graphics imagery, or performance capture. 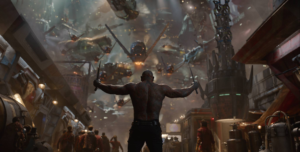 20. In the comics, Drax is green. However, for the movie, his color was changed to a muddier grey, partly because the movie already had a bright green character, Gamora, but mostly to distinguish his appearance from the Hulk.

21. Vin Diesel loved his character, Groot, so much that he would go to promotions and premieres wearing the stilts he wore for the movie and a shirt proclaiming, “I Am Groot.”

22. Stan Lee’s cameo was originally going to feature him as one of the Collector’s boxed trophies, giving Groot the middle finger. Disney executives didn’t like this, and had James Gunn change it to Lee being an alien Casanova.

23. The Collector’s residence in the movie is the space station Knowhere. In the comics, Knowhere is the base of the Guardians of the Galaxy.

24. At one point, Quill calls Rocket “Ranger Rick,” a reference to the long-running children’s nature magazine which features a cartoon raccoon with the name.

25. When Vin Diesel started recording his lines for Groot, he was pleasantly surprised to find himself working with an old friend, Doc Kane, the sound technician he’d worked with on The Iron Giant. 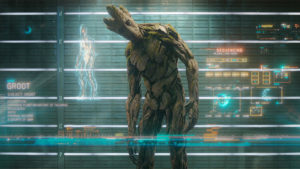 26. Yondu’s primary weapon is a sentient arrow. In the comics, Yondu was an archer.

27. Rocket Raccoon was modeled on a raccoon named Oreo living in the United Kingdom.

28. James Gunn’s brother Sean Gunn, who did the on-set acting for Rocket, improvised the line, “a bunch of jackasses standing in a circle.”

29. In the movie, Yondu is portrayed as a villainous mercenary. However, in the comics, Yondu is of a tribal warrior race.

30. Thanos almost got cut from the movie, but James Gunn decided to keep him for a connection to The Avengers.