E.T. the Extra-Terrestrial is a 1982 American science fiction movie co-produced and directed by Steven Spielberg, and written by Melissa Mathison. The movie features special effects by Carlo Rambaldi and Dennis Muren, and stars Henry Thomas, Dee Wallace, Peter Coyote, Robert MacNaughton, Drew Berrymore and Pat Welsh. Take a look below for 30 more fun and fascinating facts about E.T. the Extra-Terrestrial.

1. The concept of E.T. the Extra-Terrestrial was based on an imaginary friend Steven Spielberg created after his parents’ divorce in 1960.

2. E.T. the Extra-Terrestrial was filmed from September to December, 1981, in California on a budget of $10.5 million.

3. Unlike most movies, E.T. the Extra-Terrestrial was shot in rough chronological order, to facilitate convincing emotional performances from the young cast.

4. When it was released on June 11th, 1982, by Universal Pictures, E.T. the Extra-Terrestrial was an immediate blockbuster, surpassing Star Wars: Episode IV – A New Hope to become the highest-grossing film of all time.

5. It’s considered one of the greatest movies ever made, it was widely acclaimed by critics as a timeless story of friendship, and it ranks as the greatest science fiction movie ever made in a Rotten Tomatoes survey.

6. Steven Spielberg shot most of the movie from the eye-level of a child to further connect with Elliott and E.T.

7. Most of the full-body puppetry was performed by a 2’10” tall stuntman, but the scenes in the kitchen were done using a 12 year old boy who was born without legs but was an expert on walking on his hands.

8. Steven Spielberg stated in an interview that E.T. was a plant-like creature, and wasn’t neither male nor female.

9. According to the film’s novelization, E.T. is over 10 million years old.

10. The script was largely written while on location filming for Raiders of the Lost Ark during filming breaks. Steven Spielberg dictated the story to screenwriter Melissa Mathison who was there with her then-boyfriend and future husband Harrison Ford.

11. At the auditions, Henry Thomas thought about the day his dog died to express sadness. Director Steven Spielberg cried, and offered him the role of Elliott on the spot. 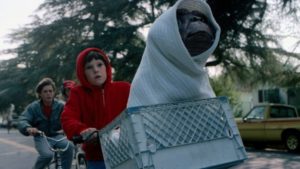 12. The gag where the mother looks in the closet and sees the alien surrounded by toys was dreamed up by Robert Zemeckis.

13. Harrison Ford initially filmed a cameo role in the movie as Elliott’s school headmaster, but the scene was cut.

14. E.T.’s face was modeled after poet Carl Sandburg, Albert Einstein and a pug.

15. The doctors and nurses that work on E.T. are all real emergency room technicians. They were told to treat E.T. the same way that they would treat a real patient so that their dialogue and actions would seem real.

16. Foley Artist John Roesch said that he used a wet t-shirt crammed with jello to simulate the noise of E.T.’s waddling walk.

18. E.T.’s communicator actually worked, and was constructed by Henry Feinberg, an expert in science and technology interpretation for the public. 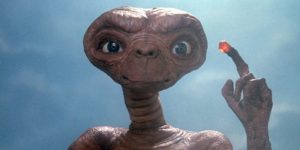 19. E.T. riding in the basket on Elliott’s bicycle flying in front of the Moon is the trademark image of Amblin Entertainment.

20. It’s never mentioned where exactly Elliott and his family live, but based on the license plates and the spot Elliott points to on the map when he’s showing it to E.T., it appears to be somewhere in northeastern California, near Lake Tahoe.

21. Steven Spielberg’s original concept for the movie was the story of a family that was terrorized in their home by aliens. He instead decided to go with a family-friendly movie and the family-in-jeopardy concept was developed into “Poltergeist.”

22. Elliott was originally supposed to lure E.T. into the house with M&M’s, but Mars, Incorporated turned down the request to use their candy. Reese’s Pieces were used instead, and the placement resulted in a 65% surge in sales.

23. E.T.’s voice was provided by Pat Welsh and Debra Winger.

24. Elliot’s mom was the only adult whose face was shown for the first half of the movie. 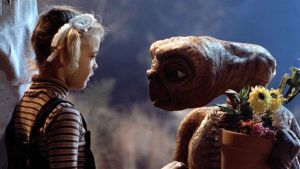 25. Steven Spielberg came up with the concept for a sequel called E.T. II: Nocturnal Fears, where Elliot and his friends are kidnapped by other aliens and E.T. would come to their rescue. It would also be revealed that E.T.’s real name is Zrek.

26. Juliette Lewis auditioned for the role of Gertie, but her father reportedly made her turn it down.

27. At the 20th anniversary re-release premier, John Williams conducted a live orchestra as the movie played, much like an orchestra would do for a stage musical.

28. Steven Spielberg is reported to have spent $100,000 digitally removing guns from the 20th Anniversary re-release of the movie in 2002. He regretted using the scene and said he would remove it if he ever re-issued the movie.

29. Almost 10% of the $10.5 million budget went on the alien creature puppets and related animatronics.

30. The role of Mary, the children’s mother, was first offered to Shelley Long but she had already signed to film “Night Shift” and was forced to decline.