The Great Depression was a severe worldwide economic depression that took place mostly during the 1930s. It started in the United States but the timing varied across nations; in most countries it started in 1929 and lasted until 1941. It was the longest, deepest and most widespread economic depression of the 20th century. Take a look below for 30 more fascinating and interesting facts about the Great Depression.

1. President Herbert Hoover’s name became synonymous with the hardships faced by many. Soup was called “Hoover Stew,” and shanty towns made out of cardboard and sheets were called “Hoovervilles.”

2. About 6,000 street vendors walked down the streets of New York City in 1930 trying to sell apples for 5 cents each.

3. Zippers began being widely used during the Great Depression because buttons were too expensive.

5. Thousands of homeless families camped out on the Great Lawn at Central Park in New York City, which was an empty reservoir during the Great Depression. 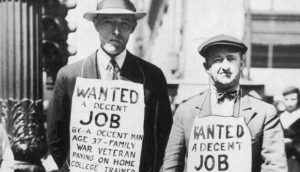 7. One of the biggest Hoovervilles in the nation was built in 1930 in St. Louis. It had its own mayor, churches and social institutions. The shanty town was funded by private donors and existed until 1936.

8. In the 1920s, the wealthiest 1% of people owned more than a third of all American assets.

9. When speculating on stocks became a prominent practice, banks began lending money to investors to buy stock. Nearly $4 out of every $10 borrowed from the banks was used to buy stock.

11. During the Great Depression, manufacturing workers earned about $17 per week while doctors were earning $61 per week.

12. Chicago gangster Al Capone, in one of his sporadic attempts at public relations, opened a soup kitchen during the Great Depression. For millions, soup kitchens provided the only food that they would eat that day.

13. The Wall Street Crash of 1929 was one of the main reasons behind the Great Depression. The crash became known as “Black Thursday,” “Black Monday,” and “Black Tuesday.” The crash took place over several days, with Tuesday being the most devastating.

14. On Black Tuesday, October 29, 1929, the market lost $14 billion in value, making the loss for that week a massive $30 billion. This was 10 times more than the annual federal budget and far more than the United States had spent in World War I. 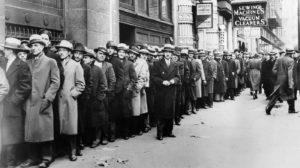 15. After the initial crash, there was a wave of suicides in the New York’s financial district. It’s said that the clerks of one hotel even started asking new guests if they needed a room for sleeping or for jumping.

16. As news of the stock market crash spread, people began withdrawing their money from the banks, causing massive bank runs. Milton Friedman, a Nobel prize winning economist, argued that the 1930s market crash itself didn’t cause the depression, but it was the collapse of the banking system during the waves of public panic during 1930 and 1933.

17. One American sheep farmer found that he wouldn’t make any money off his sheep so rather than watch his 3,000 sheep starve to death, he cut their throats and threw them in a canyon.

18. Scholars estimate that nearly 50% of children during the Great Depression didn’t have adequate food, shelter, or medical care. Many suffered from rickets.

19. African Americans were the hardest hit during the Great Depression and many of them were the first to get laid off.

20. Some people who became homeless would ride on railroad cars because they didn’t have money to travel. Some famous men who rode the railroad cars were William O. Douglas, the U.S. Supreme Court Justice from 1939 to 1975, novelist Louis L’Amour, and folk singer Woody Guthrie.

21. During the Great Depression, a recording number of 60 to 80 million Americans went to the movies every week. 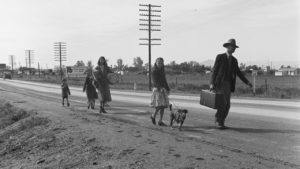 24. The Hawley Smoot Tariff Act of 1930 increased U.S. tariffs which, in turn, decreased international trade, especially in the farming sector, and helped spread the Great Depression worldwide. As it spread rapidly, it gave rise to Nazism in Germany.

25. Many great structures such as the Empire State Building and the Golden Gate Bridge were completed during the Great Depression, which provided many jobs to the unemployed.

26. Economist John Maynard Keynes became popular during and after the Great Depression for constantly arguing for government intervention in the economy and for his suspicion of laissez faire policies.

27. By the 1930s, thousands of schools were operating on reduced hours or were closed down entirely. About 3 million children had left school and at least 200,000 went to ride on the rails.

28. On May 6, 1929, Joseph Stalin predicted to a small group of American communists that America would experience a revolutionary crisis and that the American communist party should be ready to assume the leadership of the impending class struggle in America.

29. While the Great Depression affected most of the country, about 40% of the country never really faced real hardship during the years.

30. Californians tried to stop migrants from moving into their state by creating checkpoints on main highway called “bum blockades.” California even instated an anti-Okie law which punished anyone bringing in indigents with jail time.