Dr. Gordon Freeman is the main protagonist of the Half-Life series, which was created by Gabe Newell and designed by Newell and Marc Laidlaw. Freeman was introduced to the game as an American man from Seattle, who graduated from MIT with a PhD in Theoretical Physics. He was an employee at Black Mesa Research Facility and often uses a range of weapons to fight alien creatures such as headcrabs. Take a look below for 30 more fascinating and bizarre facts about Gordon Freeman.

1. Gordon Freeman was meant to be a homage to the physicist and philosopher Freeman Dyson. The first proposed name for Freeman was Dyson Poincare, but Newell didn’t really like it.

2. His original model had a full beard and was called Ivan the Space Biker. The beard was eventually turned into a goatee while his glasses went through several different iterations.

3. He was originally designed by Dhabih Eng and Chuck Jones, while the Half-Life 2 model was made by Dhabih Eng only. Freeman’s face was made out of the faces of several Valve employees morphed together.

4. If you type “thirdperson” in the console in Half-Life 2, it’s revealed that Gordon’s source model doesn’t have any texture and is motionless, which means that Valve never even finished the model.

5. While older games state that Gordon started working at Black Mesa on May 15, which is the day before the Black Mesa Incident, Half-Life 2 and its episodes suggest that Gordon has been working there for a while before the incident.

6. A love scene between Alyx and Freeman was supposed to be featured in Half-Life 2 at some point. 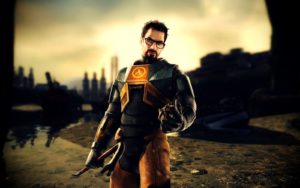 7. In October, 2009, Gordon Freeman won the title of Greatest Video Game Hero of All Time by GameSpot after a four week long user voted competition.

8. In May 2010, Gordon Freeman was ranked number 1 on the 50 Greatest Video Game Characters by Empire.

9. Though Freeman is thought to be a mute, in the image of his letter of acceptance to the Black Mesa Research Facility, someone mentions a “recent telephone conversation” between Freeman and someone at Black Mesa; which means that he can’t be a mute.

10. In Blue Shift and Opposing Force, Freeman’s model doesn’t a death animation and if he dies, he will do the walking animation instead.

11. In Splinter Cell: Chaos Theory, Anna Grimsdottir says to Sam Fish that crowbars are for geeky video game characters, which makes fun of the fact the Freeman is a scientist by profession and uses a crowbar as his preferred weapon.

13. In the Star Towers level of The Punisher, a scientist asks another scientist, called Doctor Freeman, if he heard that noise, to which Doctor Freeman replies, “Maybe the quantum physics department finally opened that extra-dimensional portal!”

14. In The Shop, the description of the crowbar weapon states that it’s suitable for any “free man.”

15. In Destroy All Humans, the main character, Crypto 137, can read the thoughts of humans. If he scans the mind of a scientist, the player can hear, “I must hurry, they need me in the test chamber! Oh wait, wrong game.” 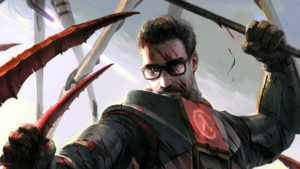 16. In TimeSplitters: Future Perfect, during the Breaking and Entering level, Cortez changes into a lab coat with a name name tag that says “Dr. Freeman.” He’s also told, “Remember, your name is Gordon, now lead on doctor.”

18. In S.T.A.L.K.E.R.: Shadow of Chernobyl, the player can find a body of a scientist called “Gordon Freeman,” whose PDA talks about Black Mesa, City 17, and a crowbar.

19. In the Left 4 Dead 2 downloadable campaign The Passing, Louis will sometimes say, “Man, I feel like Gordon Freeman!”, when equipped with a crowbar.

20. In Fallout: New Vegas, one of the terminals is from Dr. Gordon, talking about the lack of cake at his retirement party, which is a reference to both Half-Life and Portal.

21. Many fans have stated that they would love to see Bryan Cranston play Gordon Freeman in a movie.

22. Half-Life often makes fun of the fact that Gordon does a little more than manual labor at Black Mesa, even though he’s qualified enough to work there as a scientist.

23. Gordon’s assigned job at the start of Half-Life is to press a button and push a cart, which seems strange considering that he has a PhD from MIT.

24. In the first Half-Life game, Gordon not only finds himself a target of alien monsters coming from the Xen dimension, but also the Hazardous Environment Combat Unit, or HECU, which is a U.S. Marine Corps military force sent to contain the situation. 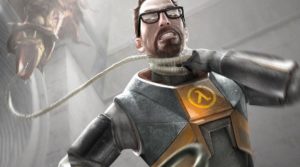 25. Gabe Newell has stated that Valve doesn’t see a reason to give Gordon a voice.

26. In Half-Life, Gordon wears the Mark IV suit and, later on in the game, the suit is equipped with an option long jump module so Gordon can leap vast distances.

27. In Half-Life 2, Gordon gets the upgraded Mark V suit, which doesn’t have the long jump module but has the zooming capability, limited sprinting, an anti-venom injection, ammo and health counter on the crosshair and the capability to use Combine power nodes to charge the suit.

28. The symbol on Gordon’s HEV suit is the lowercase Greek letter, Lambda, which is a symbol often used by scientists to denote the decay constant of radioactive elements.

29. The Lambda symbol is seen in Half-Life 2 as a marking of the human resistance. It’s often seen close to hidden supplies and on the arm bands of better equipped resistance fighters.

30. The G-Man is a mysterious character that encountered multiple times by Freeman. He’s known to display peculiar behavior and wield powers far beyond those of a human. However, his identity and motives are completely unexplained in the games and his allegiance is never known.