Vasco da Gama, 1st Count of Vidigueira, was a Portuguese explorer and the first European to reach India by sea. His initial voyage to India was the first to link Europe and Asia by an ocean route, connecting the Atlantic and the Indian oceans and therefore, the West and the Orient. Take a look below for 30 more fascinating and interesting facts about Vasco de Gama.

1. Da Gama’s discovery of the sea route to India was significant and opened the way for an age of global imperialism and for the Portuguese to establish a long-lasting colonial empire in Asia.

2. Traveling the ocean route allowed the Portuguese to avoid sailing across the highly disputed Mediterranean and traversing the dangerous Arabian Peninsula.

3. After decades of sailors trying to reach the Indies, with thousands of lives and dozes of vessels lost in shipwrecks and attacks, da Gama landed in Calicut on May 20, 1498.

4. Da Gama led two of the Portuguese India Armadas, the first and the fourth. The latter was the largest and departed for India four years after his return from the first one.

5. For his contributions, in 1524, da Gama was appointed Governor of India, with the title of Viceroy, and was ennobled as Count of Vidigueira in 1519.

6. Da Gama remains a leading figure in the history of exploration.

7. Numerous homages have been made worldwide to celebrate his explorations and accomplishments.

8. The Portuguese national epic poem, Os Lusiadas, was written in his honor by Camoes.

9. His first trip to India is widely considered a milestone in world history, as it marked the beginning of a sea-based phase of global multiculturalism.

10. In March 2016, thousands of artifacts and nautical remains were recovered from the wreck of the ship Esmeralda, one of da Gama’s armada, found off the coast of Oman. 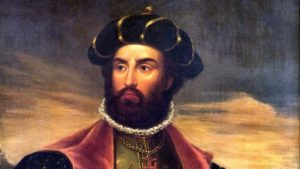 13. Da Gama’s father was a knight and also an explorer.

14. Thousands of sailors lost their lives in attacks and shipwrecks while trying to reach India for years before Vasco da Gama made the successful voyage.

16. His ships were named the San Gabriel, the Sao Rafael, and the Berrio. The fourth ship didn’t have a name as it was only used for storage.

17. Because there was a monsoon wind, they reached India in less than one month.

19. The spices in India were popular with Europeans, which was one of the reasons the safe passage was necessary.

20. On the return voyage, half of da Gama’s crew died of scurvy. 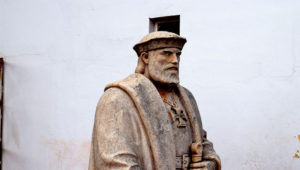 21. He was the commander of two more trips to India.

22. On his second trip, he had 20 armed ships instead of only the four on the original journey.

23. On da Gama’s second voyage, he ordered his crew to seize the cargo of an Arab ship carrying as many as 400 passengers. The ship was set on fire and all those on board died.

24. While in Calicut, he demanded that all Muslims be banned from India. The king refused.

25. Da Gama was given Vidigueira, a newly created county in 1519. During this year, he also became the first non-royal blood count in Portugal.

26. In 1524, da Gama was named the Governor of India. However, he died of malaria before he could take over his new post. 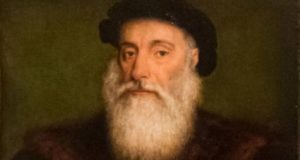 27. His father was supposed to be the commander of the expedition to India. It was delayed for so many years that da Gama ended up being given the expedition.

28. There is a crater on the Moon that was named Vasco da Gama.

29. He had one daughter and six sons. His second born son later became the governor of Portuguese India.

30. Much of da Gama’s early life was spent on fishing boats. He also studies navigation and astronomy, and he was friends with Ponce de Leon, who discovered Florida.