Jellyfish can be found in every ocean in the world. In fact, they’re even found in some freshwater lakes and ponds. They can range in size from a thimble to about 8 feet in diameter with 200 foot tentacles; this makes it as long as 2 blue whales. Take a look below for 30 more fascinating and interesting facts about jellyfish.

1. Each of their tentacles has thousands of cells called cnidoblasts. Inside the cnidoblasts are nematocysts, each of which has a coiled stinging threat. When something is tangled in a jellyfish’s tentacles, the pressure inside the nematocysts causes the venomous threads to uncoil and shock whatever is tangled.

2. Their main defense mechanisms are its sting and its transparent body, which makes it very difficult to see.

3. While many people believe that urine helps with jellyfish stings, it actually doesn’t.

4. The best thing to do after a jellyfish stings you is to get out of the water and wash the area with salt water. The salt water will deactivate the stinging cells, while fresh or tap water will reactivate them. Then use something with an edge to remove the cells.

5. Jellyfish have a short tube that hangs from their body. The tube is used as their mouth and for their digestive system. Some species even have frilly pieces that surround the central tube. These are called oral arms or mouth arms.

6. They don’t have brains, hearts, ears, heads, feet, legs or bones. In fact, their skin is so thin that they can breathe through it. 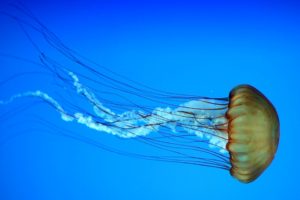 7. While they don’t have a brain, they do have a nervous system with receptors that detect light, vibrations and chemicals in the water. This is what allows them to orient themselves and guide themselves in the water.

8. They’re invertebrates, which means that they don’t have a skeleton. 95% of their body is just water.

10. Jellyfish tentacles can sting even if they’re separated from their body.

11. The creeping jellyfish is the smallest jellyfish in the world. It’s about 0.5 millimeters in diameter. It reproduces by asexually splitting itself in half.

12. The giant jellyfish, Stygiomedusa gigantea, has only been seen 17 times in the last 110 years.

13. Jellyfish live from a few hours to a few months. Some rare species are even able to live as long as 30 years.

16. The Turritopsis nutricula is known as the immortal jellyfish because it can transform from the mature medusa state back to the polyp state, which allows it to avoid death. It can do this through a cell development process called transdifferentiation. 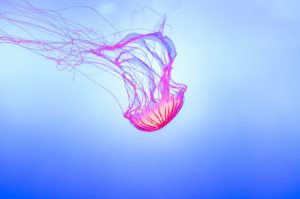 17. Jellyfish have been around for more than 650 million years, which makes them the oldest multi-organ animal.

18. The upside down jellyfish doesn’t float on water, it anchors itself to the ocean floor with its short arms and tentacles reaching up. It looks more like a bowl of plants than a jellyfish.

19. Crabs sometimes take a ride on a jellyfish. They can do this because the hard outer shell of the crab protects it from the jellyfish’s sting.

20. There are about 2,000 known species of jellyfish. About 70 of those can seriously injure or kill humans. Researchers believe that there about 300,000 more jellyfish species that haven’t been discovered.

21. The box jellyfish, Chironex fleckeri, is the most dangerous jellyfish.

22. Jellyfish are actually plankton from the Cnidaria phylum and the Scyphozoa class.

23. They move in two ways. First, they take water in their bell and then squirt it out behind them. Second, they find water currents and drift on them.

24. They’re very aggressive colonizers. For example, just 8 years after comb jellyfish were introduced into the Black Sea in 1982, they totaled about 900 million tons. They have caused about $350 million in losses to the Black Sea’s fishing and tourism industries.

25. They’re one of the very few creatures that can quickly adapt to ocean dead zones, which are zones that have been heavily polluted. 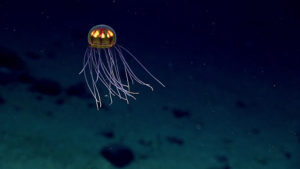 26. Jellyfish account for more than 10 times the weight of the annual fish catch around the world.

27. About 150 million people are exposed to jellyfish annually. Around 200,00 people are stung each year in Florida and 500,000 around the Chesapeake Bay.

28. Humans harvest jellyfish for collagen, which is used for treating rheumatoid arthritis.

29. The venom in a single box jellyfish can kill 60 people.

30. Jellyfish have 2 life stages. In their first stage, they’re called polyps and grow by making buds, like plants. The polyp then buds off a young jellyfish called an ephyra. After a few weeks, the ephyra becomes a fully grown medusa.