Riley B. King was an American blues singer, electric guitarist, songwriter, and record producer. King introduced a sophisticated style of soloing based on fluid string bending and shimmering vibrato that influenced many later electric blues guitarists. Take a look below for 30 more fascinating and interesting facts about B.B. King.

2. King was known for performing tirelessly throughout his musical career, appearing on average at more than 200 concerts per year into his 70s.

4. King was born on a cotton plantation in Berclair, Mississippi, and later worked at a cotton gin in Indianola, Mississippi.

5. He was attracted to music and the guitar in church, and began his career in juke joints and local radio. 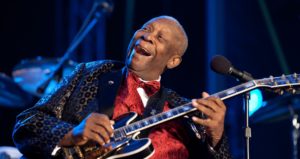 6. He later lived in Memphis, Tennessee, and Chicago, and toured the world extensively.

8. When King was four years old, his mother left his father for another man, so he was raised by his maternal grandmother, Elnora Farr, in Kilmichael, Mississippi.

9. While he was young, King sang in the gospel choir at Elkhorn Baptist Church in Kilmichael.

10. King was attracted to the Pentecostal Church of God in Christ because of its music. The local minister performed with a Sears Roebuck Silvertone guitar during services. 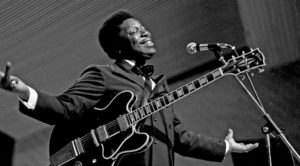 13. In November, 1941, “King Biscuit Time” first aired, broadcasting on KFFA in Helena, Arkansas. It was a radio show featuring the Mississippi Delta blues.

14. King listened to KFFA while on break at the plantation. A self-taught guitarist, he then wanted to become a radio musician.

15. In 1943, King left Kilmichael to work as a tractor driver and play guitar with the Famous St. John’s Gospel Singers of Inverness, Mississippi, performing at area churches and on WGRM in Greenwood, Mississippi.

16. In 1946, King followed Bukka White to Memphis, Tennessee. White took him in for the next ten months.

17. Shortly after, King returned to Mississippi, where he decided to prepare himself better for the next visit, and returned to West Memphis, Arkansas, two years later in 1948.

18. He performed on Sonny Boy Williamson’s radio program on KWEM in West Memphis, where he began to develop an audience.

19. King’s appearances led to steady engagement at the Sixteenth Avenue Grill in West Memphis, and later to a ten minute spot on the Memphis radio station WDIA.

20. His radio spot became so popular that it was expanded and became the Sepia Swing Club. 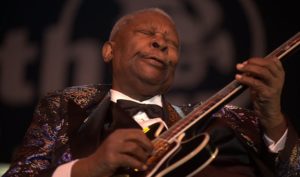 21. He worked at WDIA as a singer and disc jockey, where he was given the nickname “Beale Street Blues Boy,” later shortened to “Blues Boy,” and finally to B.B.

22. It was there that he first met T-Bone Walker. King said, “Once I’d heard him for the first time, I knew I’d have to have [an electric guitar] myself. “Had” to have one, short of stealing!”

24. He earned 15 Grammy awards, has been inducted into the Grammy Hall of Fame, and has received a lifetime achievement award due to his contributions in music.

26. After a fire broke out at a dance club in Arkansas, King ran out of the building forgetting his guitar. He went back in to get it. He later found out that two men fighting over a woman named Lucille had knocked over a kerosene heater that started the fire, which is why he named the guitar Lucille; “to remind myself never to do anything that foolish.” 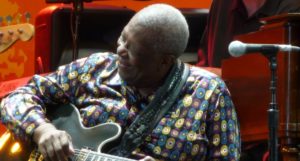 27. He claimed to have fathered over 15 children with many different women.

29. In September, 1970, King recorded Live in Cook County Jail, during a time in which issues of race and class in the prison system were prominent in politics.

30. King co-founded the Foundation for the Advancement of Inmate Rehabilitation and Recreation, tying in his support for prisoners and interest in prison reform.