Francisco Pizarro was a Spanish explorer and conqueror who is credited with bringing down the Inca Empire in the 1530s, becoming rich from the gold and silver he took on his plunders. He was born into poverty in 1476 in Trujillo, Spain, to Captain Gonzalo Pizarro Rodriquez de Aguilar, an infantry colonel, and Francisca Gonzales Mateos. Take a look below for 30 more bizarre and interesting facts about Francisco Pizarro.

1. In 1509, Pizarro set sail with Alonzo de Ojeda, departing from Spain for the New World.

2. Over the next several years, Pizarro would establish himself in the New World as Panama City’s mayor, and eventually conquering the Incan Empire.

3. In 1513, in Cartagena, he joined Martin Fernandez de Encisco’s crew, and later that year, he joined Vasco Nunez de Balboa on the way to the Pacific Ocean.

4. Pizarro arrested Balboa under the order of Pedrarias, a tyrant who awarded Pizarro for his loyalty, making him the mayor of Panama City. 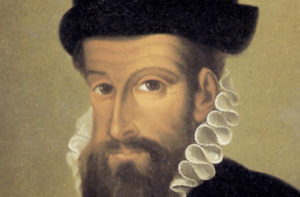 6. After hearing stories about the rich territory in South America from Pascual de Andagoya, Pizarro set off with Hernando de Luque and Diego de Almagro in 1524. The trip was short lived and they returned to Panama.

8. After sending a few trips back to Panama for supplies, Pizarro and his men continued to explore.

9. Pizarro returned to Panama and was sent to Spain to request the King’s permission to continue his expeditions in South America.

10. The King granted Pizarro’s request and he set sail with Hernando Pizarro, his brother, and continued to explore South America.

11. In 1532, Pizarro and his men overthrew Atahualpa, the Inca leader, claiming Peru.

12. Pizarro became very rich after overthrowing Atahualpa. He walked away with 1260 pounds of silver, 630 pounds of gold, and a 15 karat gold throne, Atahualpa’s throne, weighing 183 pounds. 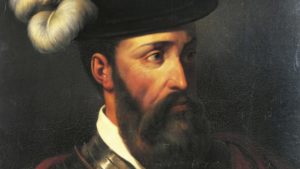 13. Lima was founded by Pizarro three years after conquering Peru.

15. In 1538, Pizarro had a fight with Diego Almagro, an expedition partner that he had known for many years. Pizarro had Almagro killed.

16. Pizarro, along with many of the conquistadors, was known to be very cruel. He once had a rebel leader’s wife tied to a stake and shot at with arrows, later sending her body down a river for the rebel leader to find.

17. In 1541, the son of Diego Almagro, accompanied by supporters of the murdered former expedition partner of Pizarro, attacked Pizarro and killed him in his home.

18. People in Peru don’t have a favorable opinion of Pizarro, considering that he murdered most of the Native Peruvian ancestors.

19. In 2005, a statue of Pizarro in Lima was moved from its original place in Lima’s central square to a park outside of the city.

20. When he was brutally stabbed to death, Pizarro made a cross with his own blood. 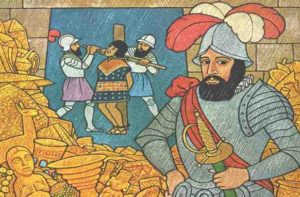 21. By his marriage to N de Trujillo, Pizarro had a son named Francisco, who married his relative Ines Pizarro.

22. After Pizarro’s death, Ines Yupanqui, whom he took as a mistress, favorite sister of Atahualpa, who had been given to Francisco in marriage by her brother, married a Spanish cavalier named Ampuero and left for Spain, taking her daughter who would later be legitimized by imperial decree.

23. Historians have often compared the conquests of Pizarro and Cortes in North and South America as very similar in style and career. However, Pizarro faced the Incas with a smaller army and fewer resources than Cortes, at a much greater distance from the Spanish Caribbean outposts that could easily support him.

24. By sheer numbers alone, Pizarro’s military victory was one of the most improbably in recorded history.

25. After his invasion, Pizarro destroyed the Inca state and, while ruling the area for almost a decade, initiated the decline of local cultures. 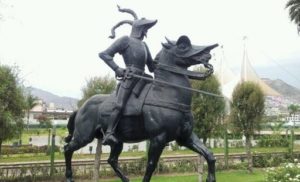 26. He replaced the Incas’ polytheistic religion with Christianity and much of the local population was reduced to serfdom under the Spanish elite.

27. Pizarro was reviled for ordering Atahualpa’s death despite the ransom payment, which Pizarro kept, after paying the Spanish King his due.

28. After returning from Peru extremely wealthy, the Pizarro family erected a plasteresque-style palace on the corner of the Plaza Mayor in Trujillo.

29. After his death, Pizarro’s remains were briefly interred in the cathedral courtyard. Some time later, his head and body were separated and buried in separate boxes underneath the floor of the cathedral.

30. In 1892, in preparation for the anniversary of Columbus‘ discovery of the Americas, a body believed to be that of Pizarro was exhumed and put on display in a glass coffin. However, in 1977, men working on the cathedral’s foundation discovered a lead box in a sealed niche, which bore the inscription, “Here is the head of Don Francisco Pizarro Demarkes, Don Francisco Pizarro who discovered Peru and presented it to the crown of the Castile.”