Fidel Alejandro Castro Ruz was a Cuban communist revolutionary and politician who governed the Republic of Cuba as Prime Minster from 1959 to 1976 and then as President from 1976 to 2008. Take a look below for 30 more bizarre and interesting facts about Fidel Castro.

1. A Marxist-Leninist and Cuban nationalist, Castro also served as the First Secretary of the Communist Party of Cuba from 1961 until 2011.

2. Under his administration, Cuba became a one-party communist state, while industry and business were nationalized and state socialist reforms were implement throughout society.

3. Born in Biran, Oriente, as the son of a wealthy Spanish farmer, Castro adopted leftist anti-imperialist politics while studying law at the University of Havana.

4. After participating in rebellions against right-wing governments in the Dominican Republic and Colombia, he planned the overthrow of Cuba President Fulgencio Batista, launching a failed attack on the Moncada Barracks in 1953.

5. After a year’s imprisonment, Castro traveled to Mexico where he formed a revolutionary group, the 26th of July Movement, with his brother Raul Castro and Che Guevara. 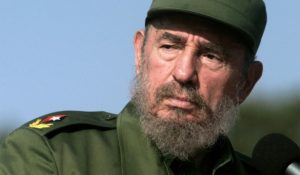 6. Returning to Cuba, Castro took a key role in the Cuban Revolution by leading the Movement in a guerrilla war against Batista’s forced from the Sierra Maestra.

8. The United States came to oppose Castro’s government and unsuccessfully attempted to remove him by assassination, economic blockade and counter-revolution, including the Bay of Pigs Invasion of 1961.

9. Countering these threats, Castro formed an alliance with the Soviet Union and allowed the Soviets to place nuclear weapons in Cuba, sparking the Cuban Missile Crisis, a defining incident of the Cold War, in 1962.

10. Adopting a Marxist-Leninist model of development, Castro converted Cuba into a one-party, socialist state under Communist Party rule, the first in the Western Hemisphere. 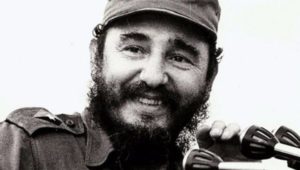 12. These actions, coupled with Castro’s leadership of the Non-Aligned Movement from 1979 to 1983 and Cuba’s medical internationalism, increased Cuba’s profile on the world stage.

13. Following the Soviet Union’s dissolution in 1991, Castro led Cuba through the economic downturn of the “Special Period,” embracing environmentalist and anti-globalization ideas.

14. In the 2000s, Castro forged alliances in the Latin America “pink tide,” named with Hugo Chavez’s Venezuela, and signed Cuba up to the Bolivarian Alliance for the Americas.

15. In 2006, Castro transferred his responsibilities to Vice President Raul Castro, who was elected to the presidency by the National Assembly in 2008.

16. The longest-serving non-royal head of state in the 20th and 21st centuries, Castro polarized world opinion.

17. His supporters view him as a champion of socialism and anti-imperialism whose revolutionary regime advanced economic and social justice while securing Cuba’s independence from American imperialism.

18. Critics view him as a dictator whose administration oversaw human-rights abuses, the exodus of a large number of Cubans and the impoverishment of the country’s economy.

19. Castro was decorated with various international awards and significantly influenced different individuals and groups across the world. 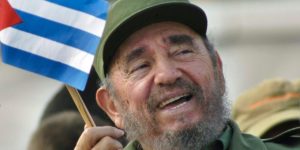 20. Castro is the author of the longest timed speech ever delivered at the United Nations. He made the speech at the 872nd plenary meeting of the General Assembly on September 26, 1960. The time listed is 4 hours and 29 minutes.

21. He was known for his busy working hours, often only going to bed at 3 or 4 AM. He even preferred to meet foreign diplomats in these early hours, believing that they would be tired, and he could gain the upper hand in negotiations.

22. Castro claimed that he survived 634 attempts or plots to assassinate him, mainly masterminded by the Central Intelligence Agency and U.S. based exile organizations.

23. Castro’s favorite author was American novelist Ernest Hemingway. Hemingway had one of his permanent residences in Cuba and wrote some of his famous works, such as For Whom The Bell Tolls on the island.

24. He wasn’t interested in music but was a devote sports fan and spent much of his time trying to keep fit and exercised regularly.

25. Castro’s private life remains largely unknown, but he is known to have had five wives with whom he had a total of 11 children. 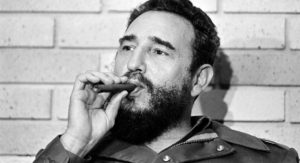 26. Castro was named as one of the 100 Most Influential Personalities of All Time by Time Magazine.

27. He was known to chew on Cuba cigars until he gave it up in 1985, saying, “The best thing you can do with this box of cigars is give them to your enemy.”

28. Castro started wearing his iconic beard as a young revolutionary. It wasn’t just a symbol of the guerrilla fighter, he had practical reasons for that, explaining, “If you calculate 15 minutes a day to shave, that is 5,000 minutes a year spent shaving.” Castro said that he would rather spend his time on more important activities.

29. While still in school, he traveled to the Dominican Republic in the summer of 1947 to participate in the overthrow of the military dictator Rafael Trujillo, planting the seed of his inclination toward armed rebellion.

30. Castro took a great interest in gastronomy, as well as wine and whiskey. As the Cuban leader, he was known to wander into his kitchen to discuss cookery with his chefs.