Francois Marie Arouet, also known as Voltaire, was a French Enlightenment writer, historian and philosopher famous for his wit, his attacks on Christianity as a whole, especially the established Catholic Church, and his advocacy of freedom of religion, freedom of speech and separation of church and state. Take a look below for 30 more awesome and interesting facts about Voltaire.

1. Voltaire was a versatile and prolific writer, producing works in almost every literary form, including plays, poems, novels, essays and historical and scientific works.

3. He was an outspoken advocate of civil liberties, despite the risk this placed him in under the strict censorship laws of the time.

4. As a satirical polemicist, he frequently made use of his works to criticize intolerance, religious dogma and the French institutions of his day.

5. Voltaire spent a year in French prison after a brief exile from Paris, because he could not contain his love for writing scandalous verse. He wrote a poem that implied scandalous behavior from the regent, that he had an inappropriate relationship with his daughter. 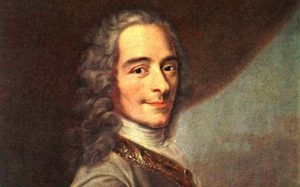 6. In 1729, Voltaire and a mathematician, Charles Marie de la Condamine, figured out how to win money in the French National Lottery, which is a monthly draw. It was a loophole that resulted in Voltaire amassing half a million francs, making it possible for him to focus on writing for the rest of his life.

7. One of Voltaire’s most famous works was a book titled Candide, published in 1759. It was a satirical novel that brought him success and inspired scandal as well. It was banned for its humorous and satirical look at religion and politics.

8. Voltaire was said to have written as much as 18 hours each day. In some instances he dictated to secretaries, sometimes from his bed.

9. He is rumored to have drank as many as 40 cups of coffee per day, which would explain his ability to write as many as 18 hours per day.

10. In 1734, Voltaire released Letters Concerning the English Nation, which resulted in him fleeing to the countryside in France.

11. He was a big supporter of Sir Isaac Newton and even helped to make the apple tale more popular. Although Voltaire wasn’t the first to make the reference to the moment Newton discovered gravity, he was a big part in making the story well known. 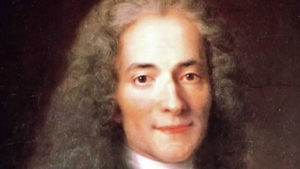 12. In the 1730s, Voltaire met Frederick the Great, the Prussian monarch, and spent a brief period working as a French spy.

13. Voltaire never married, but later in his life he and his niece adopted a young woman and he referred to himself as her parent.

14. He became fluent in five languages in his lifetime.

16. Voltaire died on May 30, 1778, at the age of 78. He died in his sleep. By the time of his death, the French opinion had changed to regard Voltaire as a literary genius.

17. At his deathbed, he was asked to admit belief in the divinity of Christ, and he responded, “In God’s name, do not talk to me of that man!”

18. His favorite play, that he wrote, was called Zaire, about a Christian baby left captured by the Muslims during the Crusades, and raised in the religion of Islam. The Sultan at Jerusalem falls in love with her. However, Zaire knows that she is a Christian by birth, she’s torn between her family, faith and the love of her life. She’s determined to marry him nevertheless, but due to a confusion, the Sultan kills himself.

19. He fell in love with his niece, Mademoiselle Denis, and sent her very explicit love letters. 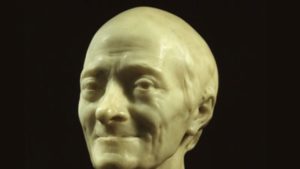 20. Voltaire’s first play, Oedipus, was a massive success. Apparently, his father came to see it and reportedly wept when he heard Voltaire’s beautiful writing.

21. Voltaire repeatedly affirmed his faith in God, but not necessarily the Christian faith.

22. He was imprisoned for suggesting that the regent of France, the Duke of Orleans, performed incest.

23. He managed to antagonize Frederick the Great with money scandals in Germany, and literary controversies.

24. Voltaire had a very deep relationship with actress Adrienne Lacouvreur, who was hastily buried without Catholic rites because of her “faithless” lifestyle. He wrote many verses mourning the unjust circumstances of her death, and made references to her in his 1759 book Candide.

25. He was born in Paris, the youngest of five children of Francois Arouet, a lawyer who was a minor treasury official, and his wife, Marie Marguerite Daumard, whose family was on the lowest rank of the French nobility. 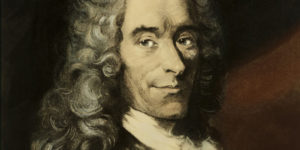 26. Some speculation surrounds Voltaire’s date of birth, because he claimed that he was born on February 20, 1694 as the illegitimate son of a nobleman, Guerin de Rochebrune or Roquebrune.

27. Two of his older brothers, Armand Francois and Robert, died in infancy, and his surviving brother Armand and sister Marguerite-Catherine were nine and seven years older.

28. He was educated by the Jesuits at the College Louis-le-Grand, where he was taught Latin, theology and rhetoric.