Vlad the Impaler was a prince of Wallachia three times between 1448 and his death. He was the second son of Vlad Dracul, who became the ruler of Wallachia in 1436. Vlad and his younger brother, Radu, were held as hostages in the Ottoman Empire in 1442 to secure their father’s loyalty. Take a look below for 30 more awesome and interesting facts about Vlad the Impaler.

2. Hunyadi launched a military campaign against the Ottomans in the autumn of 1448, and Vladislav accompanied him. Vlad broke into Wallachia with Ottoman support in October, but Vladislav returned and Vlad sought refuge in the Ottoman Empire before the end of the year.

4. He invaded Wallachia with Hungarian support in 1456. Vladislav died fighting against him.

5. Vlad began a purge among the Wallachian boyars to strengthen his position. 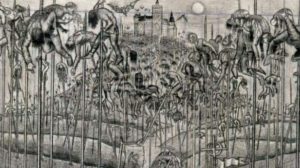 6. He came into conflict with the Transylvanian Saxons, who supported his opponents, Dan and Basarab Laiota, who were Vladislav’s brothers, and Vlad’s illegitimate half-brother, Vlad the Monk.

7. Vlad plundered the Saxon villages, taking the captured people to Wallachia where he had them impaled.

8. The Ottoman Sultan, Mehmed II, ordered Vlad to pay homage to him personally, but Vlad had the Sultan’s two envoys captured and impaled.

9. In February 1462, he attacked Ottoman territory, massacring tens of thousands of Turks and Bulgarians.

10. Vlad’s last name “Dracul” originally meant “dragon.” Vlad’s father took the name when he joined the Order of the Dragon, a Christian group opposed to the Ottoman domination of Europe. Vlad took the name Dracula and changed the meaning to “son of the dragon.” 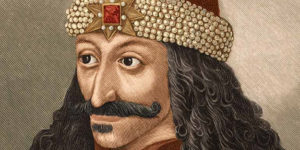 11. He was given the name “Tepes,” which means “impaler” in Romanian. He was also known by the Turks as Kazikli Bey which means “Sir Impaler.”

12. One of Vlad’s favorite military tactics was to ambush the enemy with lightning attacks on horseback, impale enemy soldiers, and then get out of the battle as fast as possible. He did this to compensate for his smaller army and limited resources.

13. Vlad was known for his morbid sense of humor. After being impaled, his victims would often twitch around as they died. According to one account, Vlad once said, “Oh, what a great gracefulness they exhibit!”

14. When one of his soldiers disrespectfully covered his nose because of the stench of the rotting corpses, Vlad impaled him as well.

15. As kids, while Vlad’s brother Radu adjusted easily to life among the Ottomans, Vlad was often whipped by his captors for being stubborn and rude.

16. The whippings had a lot of influence on Vlad, which led to his hatred of the Ottoman Turks, his brother, and the Ottoman Prince. Historians also believe that this is where he learned his torture tactics.

17. According to historians, Vlad engaged in psychological warfare. Impaling was a way of terrorizing and scaring away potential invaders.

18. After burning down an Ottoman stronghold in 1461, Vlad allegedly presented nearly 24,000 Turkish and Bulgarian heads to officials.

19. According to the 15th century manuscript The Story of a Bloodthirsty Madman Called Dracula of Wallachia, by Michael Beheim, Vlad had a gory dinnertime ritual. He would invite a few people over for dinner at his mansion, give them a feast, and then have them impaled at the dinner table. He would then finish his dinner, dipping his bread into the pooled blood of the victims. 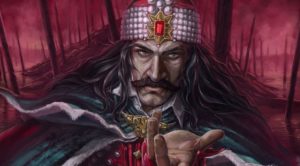 20. Historians theorize that his mother is either his father’s unknown first wife or a relative of Alexander I of Moldavia, possibly Eupraxia of Moldavia.

21. As ruler of Wallachia, Vlad imposed his own moral code on the country. He was especially concerned with chastity. Many adulterous women, women who lost their virginity, and unchaste widows allegedly had their sexual organs cut out, or were impaled.

22. Historians believe that Vlad was married twice in his lifetime.

23. The identity of his first wife is not known, but she gave birth to his eldest son and heir, Mihnea, and died while Vlad was fighting against the Turks in 1462. According to legend, she threw herself off the tower into the Arges River below the castle to avoid capture by the Turks.

24. His second wife was Justina Szilagyi, who was the cousin of Matthias Corvinus, the King of Hungary. She met Vlad during his imprisonment, and he gained his freedom by marrying her.

25. Justina gave birth to Vlad’s other two sons, and eventually became Princess of Wallachia when Vlad won the title. 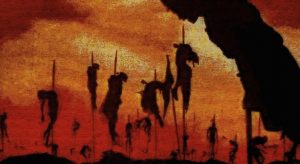 26. It’s reported that Vlad once impaled 20,000 people in a single day. In 1462, after fleeing an Ottoman advance, he left a forest of impaled people in his wake, mostly made up of prisoners of war.

27. According to one account, Vlad once caught a Roma man stealing from him. He boiled the man alive and then forced the other Roma to eat him.

28. Once Vlad paid his final tribute to the Turkish Sultan, the Sultan sent a group of men to meet with Vlad. Vlad insisted that they remove their turbans, but they refused, pleading religious custom. Angered by their refusal, he allegedly detained the men and nailed their turbans to their heads as punishment.

29. It’s estimated that in his lifetime, Vlad was responsible for 100,000 deaths, mostly of Turks. This makes him the most brutal enemy that the Ottoman Empire has ever faced.

30. In Romania, Vlad is a national hero and is mostly revered. His cruelty is acknowledged, but is seen as necessary at the time to maintain his power and repel his enemies.