Victoria was Queen of the United Kingdom of Great Britain and Ireland from June 20, 1837, until her death on January 22, 1901. On May 1, 1876, she adopted the additional title of Empress of India. Take a look below for 30 more awesome and interesting facts about Queen Victoria.

1. Victoria was the daughter of Prince Edward, Duke of Kent and Strathearn, the fourth son of King George III.

2. Both the Duke and the King died in 1820, and Victoria was raised under close supervision by her mother, Princess Victoria of Saxe-Coburg-Saalfeld.

3. She inherited the throne at the age of 18, after her father’s three elder brothers had all died, leaving no surviving legitimate children.

4. Privately, Victoria attempted to influence government policy and ministerial appointments. Publicly, she became a national icon who was identified with strict standards of personal morality.

5. Victoria married her first cousin Price Albert of Saxe-Coburg and Gotha in 1840. 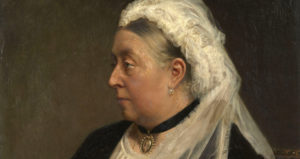 6. Her nine children married into royal and noble families across the continent, tying them together and earning her the sobriquet, “the grandmother of Europe.”

7. After Prince Albert’s death in 1861, Victoria plunged into deep mourning and avoided public appearances. As a result of her seclusion, republicanism temporarily gained strength, but in the latter half of her reign, her popularity recovered.

8. Her Golden and Diamond Jubilees were times of public celebration.

9. Her reign of 63 years and seven months was longer than that of any of her predecessors and is known as the Victorian era. It was a period of industrial, cultural, political, scientific, and military change within the United Kingdom, and was marked by a great expansion of the British Empire.

10. Victoria was the last British monarch of the House of Hanover. 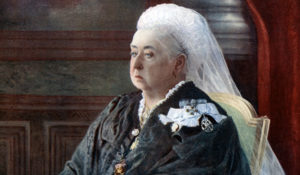 11. Her son and successor, Edward VII, initiated the House of Saxe-Coburg and Gotha, the line of his father.

12. She was born fifth in line to the throne, making it unlikely that she would ever become queen to begin with.

13. Victoria was actually her middle name. Her first name was Alexandrina.

14. She was brought up under the restrictive “Kensington System” of parenting, which kept her in near complete isolation in order to make her dependent upon her parents.

16. When Victoria moved into Buckingham Palace, she became the very first monarch to live there.

17. She spoke several languages, including French, Italian and Hindustani.

18. She learned the Hindustani language from her Indian attendant, Abdul Karim, whom Victoria considered her true friend and most trusted confidant.

19. Her family hated Karim’s presence and closeness with the queen, and after Victoria’s death, they burned all their correspondence and deported him back to India.

20. Victoria’s face was on the first adhesive postage stamp, known as the Penny Black, issued in Great Britain on May 1, 1840.

21. Queen Victoria was the first known carrier of the blood disease hemophilia, which would become known as the “Royal Disease.”

22. She hated the telephone, citing the new invention as cold and impersonal.

23. In 1880, she had a retired ship, the HMS Resolute, made into a desk as a gift for then-President Rutherford Hayes. Most presidents since then have used the very same desk.

24. She was the first British royal to travel by train.

25. Victoria eventually got her own royal train car, which was the first in the world to feature an onboard bathroom. 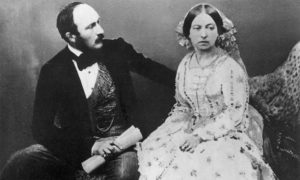 26. There were six attempts made on her life and she survived them all.

27. Victoria never went to school. She was taught at home by private tutors. Her lessons incorporated history, geography and the Bible.

28. Queen Victoria wore a white dress on her wedding day, which set off the trend worldwide for brides.

29. After the death of her husband, she only wore black and was in a permanent state of mourning.

30. In 1845, Ireland was hit by a potato blight. Millions of Irish people died, and millions emigrated, resulting in a Great Famine. At that time, Victoria personally donated 2,000 pounds sterling for famine respite, which was more than any other individual donor. Therefore, in Ireland, she was labeled as the “Famine Queen of Ireland.”