Leif Erikson was a Norse explorer from Iceland. He was the first known European to have discovered continental North America, excluding Greenland, before Christopher Columbus. Take a look below for 30 more awesome and interesting facts about Leif Erikson.

1. According to the Sagas of Icelanders, he established a Norse settlement at Vinland, tentatively identified with the Norse L’Anse aux Meadows on the northern tip of Newfoundland in modern-day Canada.

2. Archaeological evidence suggest that Vinland may have been the areas around the Gulf of St. Lawrence and that the L’Anse aux Meadows site was a ship repair station.

3. Leif was the son of Erik the Red, the founder of the first Norse settlement in Greenland and of Thjodhid, both of Norwegian origin.

4. His place of birth is not known, but he is assumed to have been born in Iceland, which had recently been colonized by Norsemen mainly from Norway.

5. He grew up in the family estate Brattahlio in the Eastern Settlement in Greenland. 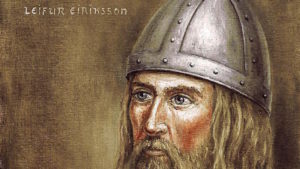 6. Leif had two known sons: Thorgils, born to noblewoman Thorgunna in the Hebrides; and Thorkell, who succeeded him as chieftain of the Greenland settlement.

7. Leif Erikson Day is celebrated on October 9th each year in honor of Leif Erikson, who is believed to be the first explorer to set foot in North America.

8. It’s believed that Vinland is located in Nova Scotia, but Viking ruins were found in 1963 in northern Newfoundland, leading some to believe that this was the site of Vinland, instead of Nova Scotia.

9. The Viking site in northern Newfoundland is believed to be the oldest settlement in North America by Europeans. To date, there have been more than 2,000 Viking artifacts recovered on the site. 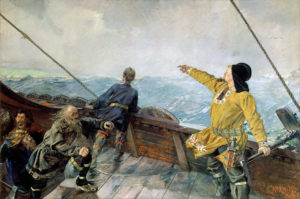 12. In 1964, Leif Erikson Day was officially adopted by Congress.

13. Leif Erikson Day is celebrated with a presidential proclamation in the United States.

14. Some people celebrate Leif Erikson Day by embarking on a new adventure, such as surfing, mountain climbing, or by buying lottery tickets in honor of “Leif the Lucky.”

15. Because Leif Erikson was on a voyage to spread Christianity, when he discovered North America, some people choose to renew their religious faith on Leif Erikson Day.

17. Leif had two brothers, whose named there Thorsteinn and Thorvaldr, and a sister, Freydis.

18. Thorvald Asvaldsson was banished from Norway for manslaughter and went into exile in Iceland accompanied by young Erik.

19. When Erik was himself banished from Iceland, he traveled further west to an area he named Greenland, where he established the first permanent settlement in 986. 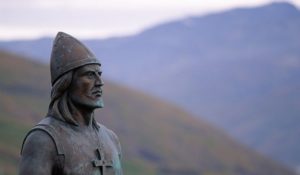 20. Tyrker, one of Erik’s thralls, have been specially trusted to keep in charge of Erik’s children, as Leif later referred to him as his “foster father.”

21. Leif was described as a wise, considerate and strong man of striking appearance.

22. During his stay in the Hebrides, he fell in love with a noblewoman, Thorgunna, who have birth to their son Thorgils. Thorgils was later sent to Leif in Greenland, but he didn’t become popular.

23. After Leif’s first trip to Vinland, he returned to the family estate of Brattahlio in Greenland, and started preaching Christianity to the Greenlanders.

24. His father, Erik, reacted coldly to the suggestion that he should abandon his religion, while his mother quickly became a Christian and built a church called Thjoohild’s Church.

25. Leif is last mentioned alive in 1019, and by 1025 he had passed on his chieftaincy of Eiriksfjoror to another son, Thorkell.

26. Nothing is mentioned about his death in the sagas, however, he probably died in Greenland some time between 1019 and 1025.

27. Leif’s successful expedition in Vinland encouraged other Norsemen to also make the journey.

28. The first apparent contact between the Norse and the Indigenous people, who the Norse later referred to as skraelingjar, was made by Leif’s brother Thorvald, and resulted in hostilities and killing.

29. Knowledge of the Vinland journeys might have spread around medieval Europe, as writers such as Adam of Bremen made mention of remote lands to the west.

30. Stories of Leif’s journey to North America had a profound effect on the identity and self-perception of later Nordic Americans and Nordic immigrants to the United States.