Elizabeth I was Queen of England and Ireland from November 17, 1558, until her death on March 24, 1603. Sometimes called The Virgin Queen, Gloriana or Good Queen Bess, Elizabeth was the last monarch of the House of Tudor. Take a look below for 30 more awesome and interesting facts about Elizabeth I.

1. Elizabeth was the daughter of Henry VIII and Anne Boleyn, his second wife, who was executed two and a half years after Elizabeth’s birth.

2. Anne’s marriage to Henry VIII was annulled, and Elizabeth was declared illegitimate.

3. Her half-brother, Edward VI, ruled until his death in 1553, bequeathing the crown to Lady Jane Grey and ignoring the claims of his two half-sisters, Elizabeth and the Roman Catholic Mary, in spite of statue law to the contrary.

4. Edward’s will was set aside and Mary became Queen, deposing Lady Jane Grey.

5. During Mary’s reign, Elizabeth was imprisoned for nearly a year on suspicion of supporting Protestant rebels.

6. In 1558, Elizabeth succeeded her half-sister to the throne and set out to rule by good counsel.

7. She depended heavily on a group of trusted advisers, led by William Cecil, 1st Baron Burghley.

8. One of her first actions as queen was the establishment of an English Protestant church, of which she became the Supreme Governor. The Elizabethan Religious Settlement was to evolve into the Church of England.

9. It was expected that Elizabeth would marry and produce an heir to continue the Tudor line, but she never did, despite many courtships.

10. She was eventually succeeded by her first cousin twice removed, James VI of Scotland. She had earlier been responsible for the imprisonment and execution of James’ mother, Mary, Queen of Scots.

11. In government, Elizabeth was more moderate than her father and half-siblings have been. One of mottoes was “video et taceo,” which means “I see but say nothing.”

12. In religion, she relatively tolerant and avoided systematic persecution.

13. After the pope declared her illegitimate in 1570 and released her subjects from obedience to her, several conspiracies threatened her life, all of which were defeated with the help of her ministers’ secret service.

14. Elizabeth was cautious in foreign affairs, maneuvering between the major powers of France and Spain.

15. She only halfheartedly supported a number of ineffective, poorly resourced military campaigns in the Netherlands, France and Ireland.

16. England’s defeat of the Spanish Armada in 1588 associated Elizabeth with one of the greatest military victories in English history.

17. As she grew older, Elizabeth became celebrated for her virginity. A cult grew around her which was celebrated in the portraits, pageant and literature of the day.

18. Elizabeth’s reign became known as the Elizabethan era. The period is famous for the flourishing of English drama, led by playwrights such as William Shakespeare and Christopher Marlowe, and for the seafaring prowess of English adventurers such as Francis Drake.

19. Some historians depict Elizabeth as a short-tempered, sometimes indecisive ruler, who enjoyed more than her share of luck. 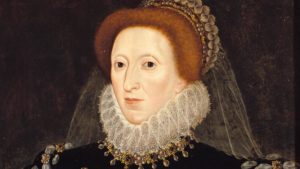 20. Towards the end of her reign, a series of economic and military problems weakened her popularity.

21. Elizabeth is acknowledged as a charismatic performer and a dogged survivor in an era when government was ramshackle and limited, and when monarchs in neighboring countries faced internal problems that jeopardized their thrones.

23. The Venetian ambassador once states that in 1603, Elizabeth possessed the languages, so meticulously that every language seemed, by all accounts, to be her native tongue.

24. She set up a council of advisers called the Privy Council.

25. She removed the Pope as head of the English Church and instead became the Supreme Governor of the Church of England. 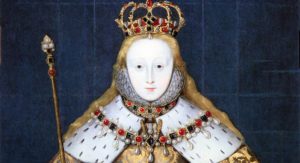 26. Although Elizabeth’s Councillors relentlessly pressured her for marriage to ensure an indisputable succession, Elizabeth found more advantages in remaining single.

27. The “single” statue of Elizabeth encouraged the fad of virginity. She used her single statue to her benefit by creating a myth that raised her above ordinary women of her time. Her virginity raised her to the level of a virgin goddess.

28. Elizabeth was recalled as an early fashionista in many ways because of her high fashion. According to one estimate, she may have owned as many as 2,000 pairs of globes.

29. Elizabeth plunged into depression after the death of several of her close friends. In March 1603, she fell sick and remained in a state of deep sorrow.

30. She died on March 24, 1603, at Richmond Palace. She was buried in Westminster Abbey beside her grandfather Henry VI.