Dwight David “Ike” Eisenhower was an American army general and statesman who served as the 34th President of the United States from 1953 to 1961. During World War II, he was a five star general in the United States Army and served as Supreme Commander of the Allied Expeditionary Forces in Europe. Take a look below for 30 more awesome and interesting facts about Dwight D. Eisenhower.

1. He was responsible for planning and supervising the invasion of North Africa in Operation Torch in 1942 and 1943 and the successful invasion of France and Germany in 1944 and 1945 from the Western Front.

2. Eisenhower was born in Denison, Texas, but was raised in Kansas in a large family of mostly Pennsylvania Dutch ancestry.

3. His family had a strong religious background.

4. His mother was born a Lutheran, married as a River Brethren, and later became a Jehovah’s Witness. However, Eisenhower didn’t below to any organized church until 1952.

5. He graduation from West Point in 1915 and later married Mamie Doud, with whom he had two sons. 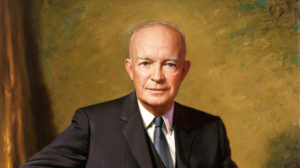 6. During World War I, he was denied a request to serve in Europe and instead commanded a unit that trained tank crews.

7. Following the war, he served under various generals and was promoted to the rank of brigadier general in 1941.

8. After the United States entered World War II, Eisenhower oversaw the successful invasions of North Africa and Sicily before supervising the invasions of France and Germany.

9. After the war, Eisenhower served as Army Chief of Staff and then took on the uncomfortable role as president of Columbia University.

11. Eisenhower graduated from the Command and General Staff School at Ft. Leavenworth, Kansas, in 1926 as first in a class of 245. 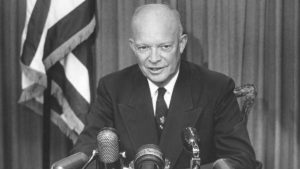 12. Between 1935 and 1939, Eisenhower was assistant military advisor to the Philippines under General Douglas MacArthur.

13. During the first 35 years of marriage, the Eisenhowers moved frequently because of military obligations and promotions.

14. Following Germany’s surrender in 1945, Eisenhower was appointed the military governor of the U.S. Occupied Zone, and soon after U.S. Army chief of staff.

15. In 1952, Eisenhower was elected as the President of the United States. He served two consecutive terms.

16. He was able to bring peace to the South Korean border in 1953 through an armistice.

17. Eisenhower gave his Atoms of Peace speech in 1953 and helped reduce some of the tension regarding the development of atomic bombs. A 1955 meeting of the major world powers further helped to reduce the threat of nuclear war.

18. Eisenhower was president when Hawaii and Alaska became states.

19. When he retired, Eisenhower and his wife settled in Gettysburg in a farmhouse. 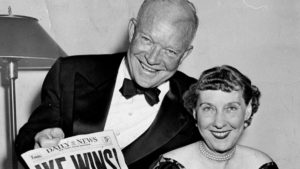 20. His grandson, David, is the namesake of Camp David, Eisenhower’s country retreat.

21. As a child, Eisenhower was supposed to be watching his little brother, but didn’t. His brother then had an accident that resulted in him going blind in one eye.

22. Every child in Eisenhower’s family was nicknamed “Ike”, “Little Ike” was Dwight’s nickname. After he rose to the position of 5 star general, he was the only one in his family that was still referred to as Ike.

23. Eisenhower’s later life all hinged on a potentially life threatening decision he made as a freshman in school. He had hurt his knee, which led to a leg infection. The doctor told him that he would die if he didn’t allow the leg to be amputated. Eisenhower refused to allow the surgery, but he didn’t die. Had he taken the doctor’s advice, he never would have had a military career.

24. While at West Point, Eisenhower once tackled legendary athlete Jim Thorpe during a football game in 1912. Eisenhower was also a cheerleader for the junior varsity team.

25. Eisenhower said of his life’s regrets, “not making the baseball team at West Point was one of the greatest disappointments of my life, maybe my greatest.”

26. An apartment at the top of the Culzean Castle in Scotland was given to Eisenhower in recognition of his role as Supreme Commander of the Allied Forces in Europe during World War II.

27. In June 1945, Eisenhower received an honorary Freedom of the City of London.

28. In January 1946, The Metropolitan Museum of Art named Eisenhower an Honorary Fellow for Life in recognition of his efforts to recover art looted by the Nazis during World War II.

29. In 1965, he received an honorary doctorate from Grinnell College in Grinnell, Iowa.

30. In 1966, he was the second person awarded Civitan International’s World Citizenship Award.