Kate “Ma” Barker, better known as Ma Barker, and sometimes as Arizona Barker, was an American mother of several criminals who ran the Barker gang during the “public enemy era,” when the exploits of gangs of criminals in the U.S. Midwest gripped the American people and press. Take a look below for 28 scary and bizarre facts about Ma Barker.

1. She traveled with her sons during their criminal careers.

2. After Barker was killed during a shoot-out with the FBI, she gained a reputation as a ruthless crime matriarch who controlled and organized her sons’ crimes.

3. J. Edgar Hoover described her as, “the most vicious, dangerous and resourceful criminal brain of the last decade.”

4. Ma Barker has been presented as a monstrous mother in films, songs and literature. However, those who knew her insisted that she had no criminal role, and they as well as others allege that Hoover created such accusations to excuse the FBI for killing her. 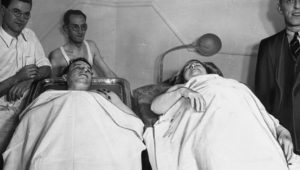 6. She had four sons: Herman, Lloyd, Arthur and Fred, who, with Alvin Karpis, formed the Barker-Karpis Gang in 1931.

7. The year that the Barker-Karpis Gang was formed, Fred and Alvin shot a sheriff to death. The murder started a pattern of thoughtless killing by the gang.

8. Ma Barker became a wanted woman. On January 16, 1935, Ma and Fred where shot and killed by FBI agents in Oklawaha, Florida.

10. Her parents were of Irish and Scottish descent. 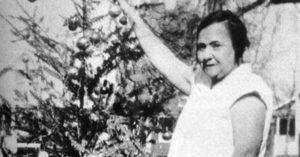 11. She was a headstrong girl with dark penetrating eyes and a nasty temper. Along with her siblings, she attended church regularly and spent her free time singing and playing the fiddle.

12. As a child, Clark witnessed local outlaw Jesse James and his gang ride through her hometown.

13. The sight triggered her thirst for adventure and was a catalyst for her life to come.

14. In 1892, Clark married a man who would fail to quench that thirst – a poor, soft-spoken tenant farmer named George Barker.

15. Over the next decade, the couple had four sons.

16. Barker’s sons committed crimes as early as 1910, when Herman Barker was arrested for highway robbery after running over a child in the getaway car. 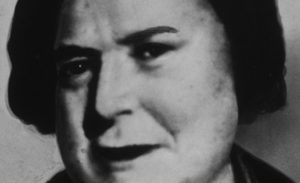 17. Over the next few years, Herman and his brothers Lloyd, Fred and Arthur were repeatedly involved in crimes of increasing seriousness, including robbery and murder.

18. FBI agents discovered the hideout of Barker and her son, Fred, after Arthur “Doc” Barker was arrested in Chicago on January 8, 1935.

19. A map found in his possession indicated that other gang members were in Ocklawaha, Florida. The FBI soon located the house where the gang was staying after identifying references to a local alligator named “Gator Joe,” mentioned in a letter sent to Doc.

20. Barker and her sons rented the property under the pseudonym “Blackburn”, claiming to be a mother and sons wanting to vacation in a country retreat.

22. Unknown to the FBI, Karpis and other gang members had left three days before, leaving only Fred and Ma in the house.

23. Ordered to surrender, Fred opened fire; both he and his mother were killed by federal agents after an intense, hours-long shootout. Allegedly, many local people came to watch the events unfolding, even holding picnics during the gunfire. 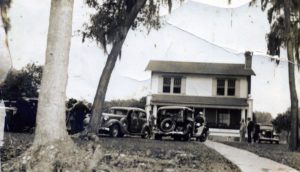 24. After gunfire ceased coming from the house, the FBI ordered local estate handyman Willie Woodbury to enter the house wearing a bulletproof west.

25. Woodbury reported that there was no one inside alive.

26. Both bodies were found in the same front bedroom. Fred’s body was riddled with bullets, but Ma appeared to have died from a single bullet wound. According to the FBI’s account, a Tommy gun was found lying in her hands.

27. Their bodies were put on public display, and then stored unclaimed, until October 1, 1935, when relatives had them buried at Williams Timberhill Cemetery in Welch, Oklahoma, next to the body of Herman Barker.

28. The popular image of her as the gang’s leader and its criminal mastermind, portrayed in films such as “Ma Barker’s Killer Brood,” “Bloody Mama,” and “Public Enemies,” is widely regarded by historians as fictitious.