Blade, or Eric Brooks, is a fictional character that appears in American comic books published by Marvel Comics. He was created by writer Marv Wolfman and penciller Gene Colan. His first appearance was in the comic book The Tomb of Dracula #10. Take a look below for 28 more interesting and fun facts about Blade.

1. Blade’s mother was bitten by a vampire as she was going into labor. As a result, Blade was born with several vampire abilities.

2. He is not affected by garlic, sunlight, crosses, vampire bites, and vampire hypnosis. Also, he ages at a slower rate.

3. According to vampires from the Marvel Universe, Blade has all of their strengths and none of their weaknesses.

4. Blade’s biggest weakness is his desire for blood. He has a moral compass so he doesn’t act on his bloodlust but he’s often tempted. 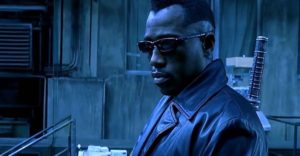 6. Blade is from London and has a thick English accent. Despite the fact, he’s been portrayed by at least 11 actors in animated shows and movies, but he has never been depicted with a British accent.

7. He was originally known as Blade the Vampire Slayer.

8. His mother, Tara, was bitten by Deacon Frost, who is Blade’s mortal enemy.

9. Blade can instinctively tell when supernatural creatures are nearby.

10. Blade used to be a part of a street gang called the Bloodshadows. 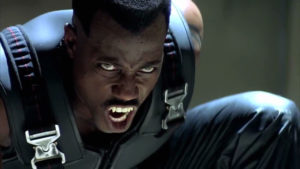 11. Vampires are fatally allergic to ultraviolet rays, which is why sunlight kills them. Because of this, Blade has an arsenal of ultraviolet weapons.

12. There was a Blade television show in 2006. The titular role was played by Sticky Fingaz.

13. In the 2012 animated series, Ultimate Spider-Man, Blade is voiced by Terry Crews.

14. Upon Blade’s debut, he wore a green visor and a green leather jacket.

15. Blade’s sense of sight and hearing are heightened to levels comparable to those possessed by true vampires. He is capable of seeing objects with perfect clarity at much greater distances than ordinary humans.

17. He possesses the strength of a vampire, allowing him to lift about 1 ton due to his half-vampire side. He has overpowered a vampiric Spider-Man at one point. 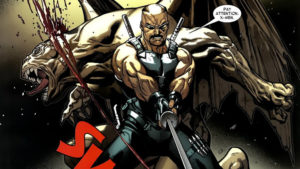 18. Blade is capable of running and moving at speeds greater than the best human athlete. He can accelerate his movements to cover short distances in an instant, faster than the human eye can see, but he’s not as fast as a pure vampire.

19. Blade’s agility, balance, and bodily coordination are enhanced to levels that are beyond the natural physical limits of the best human athletes.

20. He’s able to leap several feet into the air and is able to move, jump, climb, flip and run at incredibly fast speeds without difficulty or exhaustion.

21. Blade’s musculature generates less fatigue toxins during physical activity than the musculature of an ordinary human. He can exert himself at peak capacity for several hours before fatigue begins to impair him.

22. Blade, like true vampires, possesses an accelerated healing ability that allows him to heal mild to moderate injuries with much greater speed and efficiency than ordinary humans.

23. It was implied that the identity of Ronin was that of Blade before it was even revealed, because of 3 notable hints: his interest in vampires, or as he calls them walkers, the cloak that he wears, and the fact that he always carries his blades. 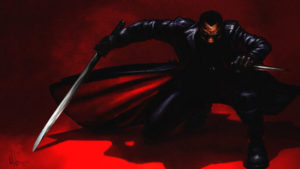 24. Blade claims that he knows Dr. Brashear from another life.

25. Blade is one of the many heroes mentioned in the Civil War Battle Damage Report.

26. Blade is one of the many heroes to attend Storm and Black Panther‘s wedding.

27. He is born as a Dhampir. This means that his skeletal and cardiac muscle system on a cellular level is altered. His muscles are more dense, more efficient and faster, which allows him to produce much more force than a normal human.

28. As Spider-Hero, Blade showed exceptional prowess in sorcery and the supernatural. He assumed that Photon’s light mimicry of Shuma-Gorath’s shields would buy them time, and was able to guide Power Man to utilize his chi in much greater and diverse ways that he never had before.