Hawks are medium sized diurnal birds of prey that are part of the Accipitridae family. There are more than 200 known species of hawks. They can be found on all continents except Antarctica. They inhabit a wide variety of habitats such as, marshes, forests, rainforests, prairies, open savannas, grasslands, mountains, coastal regions and deserts.

2. On average, hawks live between 10 and 20 years, depending on the species. Some species can live up to 30 years in captivity.

3. The northern goshawk, Accipiter gentilis, is the biggest hawk species. It can grow up to 69 centimeters, or 27 inches, long with a wingspan of up to 127 centimeters, or 50 inches. They can weigh up to 2.2 kilograms, or 4.85 pounds.

5. They have amazing eyesight and can see up to 8 times more clearly than the sharpest human eye. They use their eyesight primarily for hunting.

6. While their sense of smell is bad, their hearing is acute. 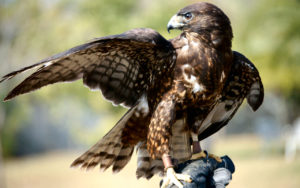 7. Hawks are known for their speed, particularly when they’re chasing their prey. When hunting, they’re known of diving 240 kilometers per hour, or 150 miles per hour, through the air.

8. They’re able to catch their prey in the air and on the ground. They use their sharp talons to catch and kill their prey.

9. Sometimes they eat their catch on the ground, but they’re also known for carrying it to their feeding spot. Their feeding spots are usually on fence posts or tree limbs.

10. Hawks are carnivores, which means that their diet is animal based. Their diet consists of mice, rats, voles, squirrels, rabbits, insects, smaller birds, frogs, turtles and reptiles.

11. Only hours after eating, hawks will regurgitate a pellet that contains any feathers, fur or small bones that they swallowed accidentally.

12. They’re solitary birds that live with a mate during the spring but otherwise survive alone. They will also join large flocks during the winter when they migrate to warmer climates.

13. A flock of hawks is called a “kettle” of hawks. A kettle varies in size but can sometimes include thousands of hawks. Migrating hawks like large groups because they help them find warm wind currents.

14. Some hawk species can be monogamous and tend to stay with the same mating partner their entire life.

15. Hawks perform a courtship dance during mating season. Male and female hawks will fly together in a circular motion. Once they’re high enough, the male will dive toward the female and then they will go back up again. They will repeat this until the male latches onto the female and they begin to free fall towards the ground. 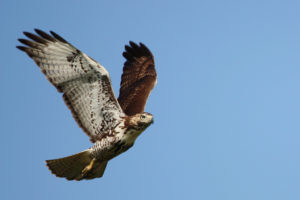 17. Hawk chicks grow and fledge in 42 to 48 days. They will remain with their parents for another 30 to 70 days after, so they can learn how to fly and hunt.

19. Hawks screech when they’re defending their territory or trying to communicate. They will screech most often when in flight.

20. They can see colors, as well as ultraviolet light. This means that they can perceive colors that humans can’t.

21. They’re known for mantling their prey, which means that they will crouch and spread their wings to form a shield that hides it from other predators.

22. In February, 2005, Canadian ornithologist Louis Lefebvre announced a method of measuring avian IQ in terms of their innovation in feeding habits. Based on his scale, hawks were named among the most intelligent birds.

23. In some cultures, the hawk totem provides wisdom in seeing situations from a higher perspective, using the power of observation, and focusing on the task at hand.

24. A war hawk, or just hawk, is a term used in politics for a person that’s in favor of war. 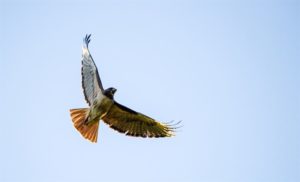 26. The most common hawk in the United States is the red-tailed hawk.

27. The red-tailed hawk is often harassed by other birds, such as owls, crows, magpies, songbirds and other hawks.

28. Hawks hunt and nest in the same territory ever year. However, they usually have multiple nest locations that they rotate annually.