The coconut tree is a member of the Arecaceae family and the only species of the genus Cocos. The term coconut can refer to the whole coconut palm or the seed, or the fruit, which, botanically, is a drupe and not a nut. Take a look below for 28 more fun and interesting facts about coconuts.

1. The term “coconut” is derived from the 16th century Portuguese and Spanish word “coco” meaning “head” or “skull”, from the three indentations on the coconut shell that resembles facial features.

2. The spelling “cocoanut” is an archaic form of the word.

3. Coconuts are known for their versatility ranging from food to cosmetics.

4. They form a regular part of the diets of many people that live in the tropics and subtropics. 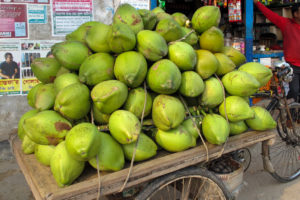 5. Coconuts are distinct from other fruits for their endosperm containing a large quantity of water, which is also called milk, and when immature, may be harvested for the potable coconut water.

6. When mature, coconuts can be used as seed nuts or processed for oil, charcoal from the hard shell, and coir from the fibrous husk.

7. When a coconut is dried, the coconut flesh is called copra.

8. The oil and milk derived from coconuts is commonly used in cooking and frying, as well as in soaps and cosmetics.

9. The husks and leaves of coconuts can be used as material to make a variety of products for furnishing and decorating.

10. The coconut has cultural and religious significance in certain societies, particularly in India, where it’s used in Hindu rituals. 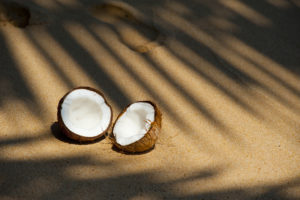 11. Coconuts can float for long distances across the ocean and then put down roots again when they are washed ashore. There are reports that individual coconuts have even reached Scandinavia.

12. At full capacity, the coconut palm bears fruit for 15 to 60 years, but under ideal conditions, fruit production can last for up to 80 years.

14. There is a crustacean that particularly likes to live where there are coconuts, and is therefore called the coconut crab.

15. There are over 1,300 types of coconut, which can all be traced back to one of two genetic origins from either the Pacific or the Indian Ocean. 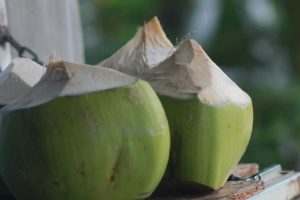 17. During World War II, coconut water was used as an IV drop because there was not enough blood plasma available.

18. Coconut oil contains median chain triglycerides which are easy to digest. The oil is a source of energy and has an accelerating effect on the metabolism.

19. Coconut oil contains four growth hormones, that help the development of many organisms.

21. One of the earliest mentions of the coconut dates back to the “One Thousand and One Nights” story of Sinbad the Sailor; he is known to have bought and sold coconut during his fifth voyage.

22. Thenga, its Malayalam and Tamil name, was used in the detailed description of coconut found in Itinerario by Ludovico di Varthema, published in 1510 and also in the later Hortus Indicus Malabaricus.

23. In the earliest description of the coconut palm known, given by Cosmos of Alexandria in his Topographia Christiana written around 545, there is a reference to the argell tree and its dupe.

24. It has generally been accepted that the coconut originated in the India-Indonesia region and float-distributed itself around the world by riding ocean currents. 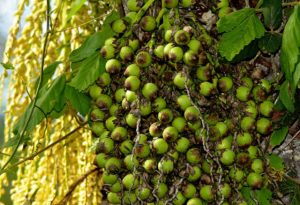 25. The oldest fossils known of the modern coconut dating from the Eocene period from around 55 million to 37 million years ago were found in Australia and India, but older palm fossils such as some of nipa fruit have been found in the Americas.

26. Some South Asian, Southeast Asian, and Pacific Ocean cultures have origin myths in which the coconut plays the main role. For example, in the Hainuwele myth from Maluku, a girl emerges from the blossom of a coconut tree.

27. In the Ilocos regions of the northern Philippines, the Ilocano people fill two halved coconut shells with cooked sweet rice and place halved boiled eggs on top of it. The ritual, known as niniyogan, is an offering made to the deceased and one’s ancestors.

28. In Hindu wedding ceremonies, a coconut is placed over the opening of a pot, representing a womb.