Cable, or Nathan Summers, is a fictional character that appears in American comic books published by Marvel Comics. He’s commonly associated with X-Force and the X-Men. He first appeared as a newborn infant in Uncanny X-Men #201 and he was created by writer Chris Claremont. Take a look below for 28 more fun and interesting facts about Cable.

2. Nathan Summers is the biological son of the X-Men member Cyclops, or Scott Summers, and Madelyne Pryor, who is Jean Grey’s clone.

3. Cable is the half brother of Rachel Summers and Nate Grey, and the genetic template for Stryfe.

4. Cable is from a possible future timeline, having been transported as an infant to the future, where he grew into a warrior, before returning to the present.

5. He is an alpha-mutant, a vastly powerful telepath and an omega level telekinetic. He once said that he can hear every single person on the planet. 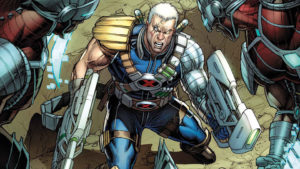 6. Following Cable to the past was Stryfe, his evil, Apocalypse raised clone. The pair clashed frequently and had their climactic battle on the Moon where they were cast into a time vortex that only Cable escaped from.

7. He was once kidnapped as an infant by his own mother to be used in the demonic ritual Inferno.

8. Cable’s cybernetic eye permits him to see deep into the electro-magnetic spectrum, and far deeper than any known 20th or 21st century technologies are capable of. It’s also possible that through this eye, Cable is able to see the deployment of psionic energies, as well as the less exotic spectrum of electromagnetic energies.

9. Cable once rewrote his DNA in order to remove the Techno-Organic Virus from his body. Before that, he used almost 20% of his telekinesis just to keep the virus from spreading to the rest of his body.

10. Rescued by his father, Cable was still close to death thanks to Apocalypse infecting him with a deadly malady known as the Techno-Organic Virus. Cyclops found his only option was to send the child to be raised in a far alternate future by Cable’s own half-sister Rachel Summers.

11. Before his power had to be greatly reduced, Cable’s telekinesis was one of the strongest in the Marvel universe. He once fought the Silver Surfer in a long grueling battle while carrying an entire city with his telekinesis simultaneously. 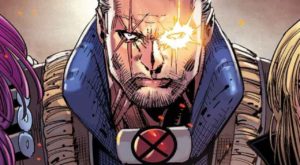 12. In Avengers X-Sanctions #4, Cable notes that Spider-Man is seen in the future as the greatest hero of all time, even more so than Captain America or Iron Man.

13. Cable was framed for the assassination attempt on Professor X by his clone, Stryfe.

14. According to Sabretooth, Cable smells like Old Spice and gunpowder, which he finds to be a pleasant smell.

15. When forced to see his darkest desire, Deadpool had a homoerotic fantasy about Cable.

16. While in Cable and Deadpool Volume 1, Cable was able to break the fourth wall as Deadpool, while pretending that he didn’t.

17. Nathan’s intended name was to be Christopher Charles Summers, until Madelyne named him Nathan. He was to be named after his grandfather and his father’s mentor.

18. Stryfe claimed that he raped Aliya posing as Cable and that Tyler was his son, not Cable’s. Although Cable felt sympathy for Stryfe, he never forgave him for Aliya’s murder. 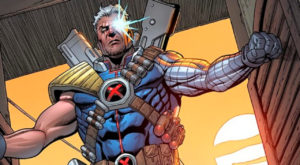 19. Even though Cable’s cybernetic left eye glows, this is actually an effect related to his mutant powers; quite possibly as a vestigial offshoot of his father’s genes. The same trait is also seen in his uncle, Vulcan and his alternate reality counterpart, Nathaniel Grey.

20. In the late 37th to the early 39th century, Nathan and Tetherblood led a squad to obtain Captain America’s Shield, which Cable then bore into many battles and used as a rallying point against Apocalypse.

21. Since his earliest years, Cable has always made use of the psychic focusing lance which combines both his normally hampered telekinetic and telepathic capabilities to create potent force blasts.

22. Cable has a sentient Artificial Intelligence that he can interact with to better access his chrono skimming abilities and interface with A.I. transmissions within the localized airwaves.

23. Through his sentient A.I., Cable can synthesize a type of M-Pox suppressant as well as other complex chemical elements with which to repress other virulent concoctions.

24. Minds of Cable and Nate Grey are interconnected, causing them great pain when they are in close proximity to each other.

25. By “bodysliding,” Cable can teleport to virtually any area, with a limited number of passengers. While in possession of the Cone of Silence, bodysliding deactivated Cable’s suit for a short time. 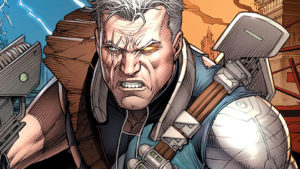 26. Cable has a diploma in law and is also in possession of an education provided by the Clan Askani, which is far more advanced than any modern era conventional education, especially in the sciences.

27. When Cable was de-aged in the House of M event, he had regained his powers along with new powers and abilities but as he re-aged, he began losing the majority of his powers shortly after purging Deadpool of certain malignancies.

28. Cable’s entire central nervous system has been augmented by chemical changes down to the atomic level and by bio-computer enhancement, rendering his reaction time far above what is possible for a human being.