Koalas are marsupial mammals, which means that their young are born immature and that they develop further in the safety of a pouch, like kangaroos. They can grow to between 60 and 85 centimeters, or 24 and 33 inches, in length. They can weigh about 14 kilograms, or 31 pounds. Take a look below for 28 more fun and fascinating facts about koalas.

1. They have large noses that are either black or pink.

3. They’re found in the eucalyptus forests of eastern Australia. They have grey fur with a cream colored chest and strong, clawed feet, which makes them perfect for living in trees.

4. Their offspring grow and develop in the pouch for about 6 months. Once they’re strong enough, they will ride around on their mother’s back for another 6 months, using the pouch to feed.

5. Koalas can eat up to 1 kilograms, or 2.2 pounds, of eucalyptus leaves in a day. They’re known as fussy eaters as they select the most nutritious and tastiest leaves from trees to eat.

6. They almost never need to drink water as they get all of their water from the leaves the eat. When the food is scarce, they’ll drink water from streams and lakes.

7. They’re nocturnal, which means that they’re mostly active during the night. During the day, they sleep while being tucked into forks or nooks in trees. They’re known to sleep between 18 and 20 hours per day. 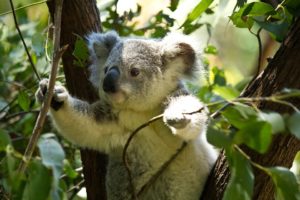 8. Koalas use several types of noises to communicate with each other. They usually rag and sometimes they sound like they’re snoring.

9. They have a scent gland on their chest that they rub against trees to mark their territory.

10. They only spend 15 minutes a day being social.

11. Koalas were heavily hunted until the 1920, when the Australian government began protecting them. With their new protected status, they have slowly began repopulating.

12. Due to the harvesting of eucalyptus trees, the koalas main habitat, their populations numbers have hit a hard top.

14. Eucalyptus is poisonous to most animals, but the koala’s digestive system creates a bacteria that redners the poison useless.

15. Like humans, koalas have fingerprints. They are the only other mammals, besides primates, to have them.

16. The brain size of modern koalas has reduced substantially from their ancestors, probably as an adaption to the low energy they get from their diets. 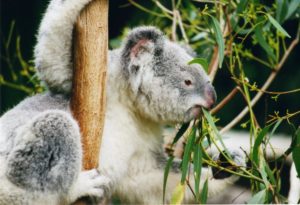 17. The world “koala” comes from the Dharug “gula.” Although the vowel “u” was originally written in the English orthography as “oo”, it was changed to “oa,” possibly in error.

18. Because of their resemblance to bears, it was often miscalled the koala bear, particularly by early settlers.

19. The first written reference of koalas was recorded by John Price, who was a servant of John Hunter, the Governor of New South Wales. Price encountered the “cullawine” on January 26, 1798, during an expedition to the Blue Mountains.

20. In 1802, French explorer Francis Louis Barrallier encountered koalas when his two Aboriginal guides, returning from a hunt, brought back two koala feet that they wanted to eat.

21. Botanist Robert Brown was the first to write a detailed scientific description of koalas in 1814, based on a female specimen captured ner what’s now Mount Kembla in the Illawarra region of New South Wales.

22. Koalas are featured in the Dreamtime stories and mythology of indigenous Australians. The Tharawal people believed that koalas helped row the boat that brought them to the continent.

23. Another myth from indigenous Australians stated how a tribe killed a koala and then used its long intensites to create a bridge for people from other parts of the world. The tory highlights the koala’s status as a game animal and the length of its intestines. 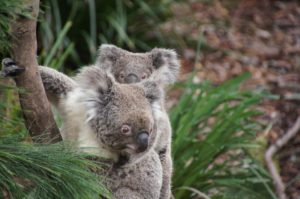 24. Tribes in both Queensland and Victoria saw the koala as a wise animal and sought its advice. The Bidjara speaking people credit the koala for turning barren lands into lush forests.

25. Early European settlers in Australia considered koalas to be prowling sloth-like animals with a fierce and menacing look.

26. The koala’s reputation changed at the beginning of the 20th century, largely because of their growing popularity and depiction in children’s stories.

27. The drop bear is an imaginary creature in contemporary Australian folklore that features a predatory, carnivorous version of the koala. The fake animal is commonly spoken about in tall tales that are designed to scare tourists.

28. Koalas were heavily hunted by European settlers in the early 20th century due to its thick and soft fur. It’s estimated that more than 2 million pelts left Australia by 1924. Koala pelts were very in demand for use in rugs, coat linings, muffs and trimming on women’s clothes.