The orange is a fruit of the citrus species Citrus x sinensis in the family Rutaceae. The fruit is sometimes called a sweet orange, to distinguish it from the related Citrus x aurantium, which is referred to as bitter orange. Take a look below for 28 more fun and interesting facts about oranges.

1. The orange is a hybrid between pomelo and mandarin. It has genes that are about 25% pomelo and about 75% mandarin.

2. The sweet orange has had its full genome sequenced.

3. Sweet oranges were mentioned in Chinese literature in 314 BC.

4. As of 1987, orange trees have been found to be the most cultivated fruit tree in the world.

5. Orange trees are widely grown in tropical and subtropical climates for their sweet fruit. 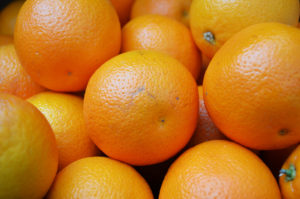 6. In 2014, 70.9 million tons of oranges were grown worldwide, with Brazil producing 24% of the world total followed by China and India.

7. The word “orange” comes from the Sanskrit “naranga,” which translates to “orange tree.” This word, in turn, derives from a Darvidian root word “narandam,” which refers to the bitter orange in Tamil.

8. Oranges derive from at least 10 ancestral species that originated in the southeast Himalayas, in a region that includes the eastern area of Assam, northern Mynamar, and western Yunnan. They were first cultivated in China around 2500 BC.

10. Navel oranges are named for their belly button like formations on the opposite side from the stem. As a general rule, the bigger the navel in the orange, the sweeter it will be.

11. Orange juice tastes bad after brushing your teeth because toothpaste blocks your sweet taste receptors due to a foaming agent that changes the permeability of your tongue cells. 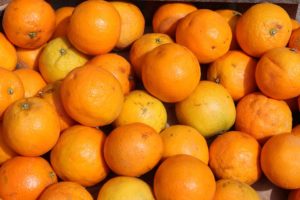 12. There are over 600 varieties of orange trees that can be found in tropical and subtropical parts of the world.

13. Oranges were introduced to Europe in the 15th century, and soon afterwards, they were shipped to South America, which became the biggest manufacturer of oranges in the world.

15. Orange tree leaves are oval in shape. They have fine, rounded teeth on the edges. The leaves are alternately arranged on the branches.

16. The flower of the orange tree is white and it blossoms in the spring.

17. Oranges are a rich source of vitamin c, vitamin B and minerals such as calcium, magnesium, potassium and phosphorus. 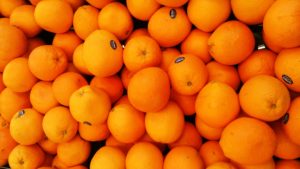 18. Oranges can be eaten raw, in the form of juices, marmalade or as part of various desserts. 85% of globally produced oranges are made into orange juice, which is often served with breakfast in western societies.

19. Orange peels have fragrant oils that are used in aromatherapy and in the perfume industry. The flowers of the orange tree are also used for the same purposes.

21. Orange peels contain chemicals which repel pests such as slugs, which is why they’re usually used as natural pesticide in gardens.

22. Dried leaves and flowers of orange trees can be used for the preparation of tea. Bergamot orange peels are sometimes used to flavor Earl Gray tea.

23. Archibald Menzies, the botanist and naturalist on the Vancouver Expedition, collected orange seeds in South Africa, raised the seedlings onboard and gave them to several Hawaiian chiefs in 1792. 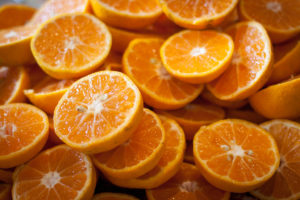 24. As oranges are rich in vitamin C and don’t spoil easily, during the Age of Discovery, Portuguese, Spanish and Dutch sailors planted citrus trees along trade routes to prevent scurvy.

25. Florida farmers obtained seeds from New Orleans around 1872, after which, orange groves were established by grafting the sweet orange on to sour orange rootstocks.

26. It’s thought that the reason oranges have long been associated with fertility is because the lush evergreen tree can simultaneously produce flowers, fruit and foliage.

27. Christopher Columbus brought the first orange seeds and seedlings to the New World on his second voyage in 1493.

28. Florida oranges are greener than California oranges. The warm night climate in Florida causes the chlorophyll pigments to migrate into the orange peel, making it greener.