Patton is a 1970 American epic biographical war movie about U.S. General George S. Patton during World War II. The movie stars George C. Scott, Karl Malden, Michael Bates and Karl Michael Vogler. It was directed by Franklin J. Schaffner from a script by Francis Ford Coppola and Edmund H. North, who based their screenplay on the biography Patton: Ordeal and Triumph by Ladislas Farago and Omar Bradley’s memoir Soldier’s Story. Take a look below for 28 more fun and fascinating facts about Patton.

1. The movie was shot in 65 millimeter Dimension 150 by cinematographer Fred J. Koenekamp and has a music score by Jerry Goldsmith.

3. George C. Scott won Best Actor for his portrayal of General Patton, but declined to accept the award.

4. The opening monologue delivered by George C. Scott as General Patton with an enormous American flag behind him, remains an iconic and often quoted image in the movie.

5. The movie was successful, and in 2003, Patton was selected for preservation in the United States National Film Registry by the Library of Congress as being, “culturally, historically or aesthetically significant.”

8. The movie begins without showing the 20th Century Fox logo, or any other indication that the movie is starting. At military bases across the United States, theater owners reported that soldiers in the audience would often stand up and snap to attention when they heard the movie’s opening line, “Ten-hut!”, assuming it to be a real call to attention.

9. Soldiers who served under the real George S. Patton said that the general’s voice was surprisingly high-pitched. This can be heard in actual movies and recordings of him. Patton himself said that he used profanity so liberally in order to compensate for this.

10. Nearly half the budget was spent on soldiers and equipment rented from the Spanish army.

11. Patton was one of President Richard Nixon’s favorite movies. He had his own print, and would often watch it in the White House, particularly before having to make an important military decision in Vietnam and Cambodia.

12. George C. Scott felt that he hadn’t really captured the full character of George S. Patton. He would apologize to director Franklin J. Schaffner on the set for not fully realizing the complexity of the man.

13. Many of the quotes from the opening speech are real quotes from George S. Patton. However, not all of them were said at one time; rather, the speech is an assemblage of Patton moments.

14. John Wayne eagerly sought the role of George S. Patton but was turned down by producer Frank McCarthy.

15. Francis Ford Coppola says in the DVD commentary that he wrote a draft screenplay in 1966 and was fired from the movie, in large part because Fox objected to opening the movie with Patton’s speech. When the movie finally went into production, Coppola’s draft was dusted off and most of it used in the final movie.

16. Some of the stock actual war footage, such as the Free French troops marching through a newly liberated Paris, was shot by future director Russ Meyer, who was a combat cameraman in the U.S. Army’s Signal Corps during World War II, from July 19, 1944, and was attached to Patton’s Third Army.

17. Patton is one of the first movies to be released on VHS video tape, along with The Sound of Music and MASH. 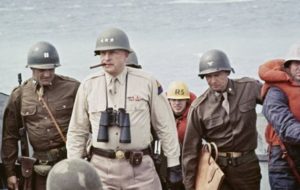 18. Patton’s speech at the beginning of the movie sanitizes his real-life quotations, which contained much more profane language.

19. In the scene where Patton orders the Third Army Chaplain to compose a weather prayer, this actually happened. The Chaplain, Colonel James Hugh O’Neal, reluctantly composed a weather prayer, which Patton had printed on the back of post cards and handed out to the men of his army. When the weather cleared, Patton was so grateful that he awarded the chaplain a bronze star on the stop.

20. About 16 and a half minutes into the movie, Patton’s jeep rides through the desert with a placard displaying the letters “WTF”. This stands for “Western Task Force,” rather than the more modern acronym that uses the same letters.

21. Although Francis Ford Coppola and Edmund H. North are credited as co-writers, they never worked together and actually never even met each other until they were collecting their awards.

23. Patton is the first PG-rated movie to win Best Picture. 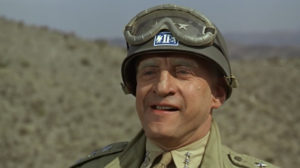 24. George S. Patton’s line about wanting to, “lead a lot of men in a desperate battle,” was actually written in a letter to his brother-in-law on the ship crossing the Atlantic on the way to North Africa.

25. Patton was the second, and last, movie to be produced in the Dimension 150 process.

26. Burt Lancaster turned down the lead role due to his anti-war beliefs.

27. The scene with General Montgomery changing Patton’s plans and substituting his own is true to life. General Bernard L. Montgomery was egotistical, brusque and demanded everything be his way at all times.

28. While the filmmakers apparently went to great lengths to use actors who look a lot like their real-life counterparts, Karl Michael Vogler, who plays Erwin Rommel, bears only a passing resemblance to the actual man.