Corn, which is also known as maize, is a cereal grain first domesticated by indigenous peoples in southern Mexico about 10,000 years ago. The leafy stalk of the plant produces separate pollen and ovuliferous inflorescences or ears, which are fruits, yielding kernels or seeds. Take a look below for 28 more awesome and interesting facts about corn.

1. Corn has become a staple food in many parts of the world, with total production surpassing that of wheat or rice.

2. Some corn production is used for corn ethanol, animal feed and other corn products, such as corn starch and corn syrup.

3. Nearly 20% of the world’s food calories come from corn.

4. Corn is grown in Africa more widely than any other crop. 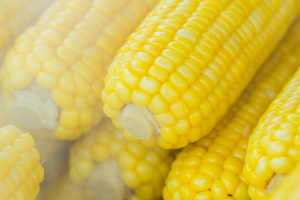 5. The United States grows 45% of the world’s corn, much of which is processed into animal feed.

6. A bushel of corn yields 2.5 gallons of ethanol: a renewable fuel used instead of lead to raise gasoline octane levels.

8. Corn farming was probably introduced to Africa to supply cheap food for slave ships. Ironically, while Africa was losing people to slavery, the addition of corn to the African diet helped to fuel a population increase. Corn, which was easy to cultivate and grew rapidly, became a staple crop in many parts of Africa. Today, in east Africa, for example, corn is eaten at nearly every meal.

10. Corn is produced on every continent of the world except Antarctica. 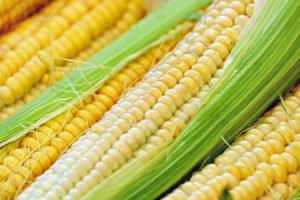 11. The highest corn acreage ever recorded in the United States was 111 million acres in 1917.

12. The word “corn” is an English word used to describe any type of grain. “Maize” is an indigenous Taino word meaning “sacred mother,” or “giver of life.”

15. Corn subsidies in the United States totaled $81.7 billion from 1995 to 2011. Corn draws in more subsidies than wheat, soybeans and rice combined.

16. Americans consume one third of all corn produced in the world.

17. It takes 91 gallons of water to produce one pound of corn. Annually, the industry uses 3.5 Long Island Sounds to grow crops. 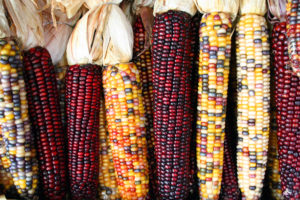 19. There are more than 3,500 different uses for corn, and its found in all sorts of products from peanut butter to batteries.

20. The starch in corn can be made into plastics, fabrics, adhesives and many other chemical products.

21. Before World War II, most corn was harvested by hand. The first mechanical corn harvester was developed in 1930 by the Gleaner Harvester Combine Corporation.

22. Color of the kernels depends on the variety of corn. They can be yellow, green, red, blue or black.

23. Besides selective breeding, new varieties of corn are produced through genetic engineering. Scientists can alter color and the size of kernels, improve nutritional value and develop varieties that are resistant to pests, herbicides and drought.

24. One acre of corn eliminates 8 tons of carbon dioxide from the air. Because of that, corn is one of the most important plants when it comes to the cleaning of the air. 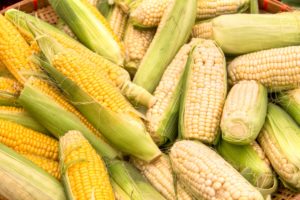 25. The value of corn in a $4 box of cornflakes is about 9 cents. The farmer that grew the corn received less than 2 cents for it.

26. Corn is wind pollinated with each tassel producing around 5 million grains of pollen. The occasional “skips” seen in fresh corn is attributable to unfertilized corn seed that doesn’t fully mature.

28. Fresh corn on the cob will lose approximately 40% of its sugar in only 6 hours at room temperature storage.