Grapefruit are a subtropical citrus tree known for its sour to semi-sweet, somewhat bitter fruit. Grapefruit is a hybrid originating in Barbados as an accidental cross between two introduced species, sweet orange and pomelo, both of which were introduced from Asia in the 17th century. Take a look below for 27 more fun and interesting facts about grapefruit.

1. When grapefruit was first found, it was named the “forbidden fruit,” and frequently, it has been misidentified with the pomelo.

2. The grapefruit’s name alludes to the clusters of the fruit on the tree, which often look like bigger versions of grapes.

4. The leaves of the grapefruit tree are glossy dark green, long and thin. It produces 5 centimeter, or 2 inch, white four-petaled flowers. 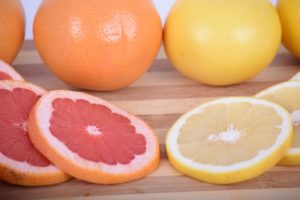 5. The grapefruit is yellow-orange skinned and generally, an oblate spheroid in shape. It ranges in diameter from 10 to 15 centimeters, or 3.9. to 5.9 inches.

6. The 1929 U.S. Ruby Red, of the Redblush variety, has the first grapefruit patent.

7. One story of grapefruit’s origin is that a “Captain Shaddock” brought pomelo seeds to Jamaica and bred the first fruit, however, it probably originated as a naturally occurring hybrid between two plants some time after they had been introduced there.

8. Grapefruit was first documented in 1750 by a Welshman, Reverend Griffith Hughes, who described specimens from Barbados in The Natural History of Barbados.

9. The grapefruit is said to be one of the Seven Wonders of Barbados.

10. The fruit was brought to Florida by Count Odet Philippe in 1823 in, what is now known, as Safety Harbor. 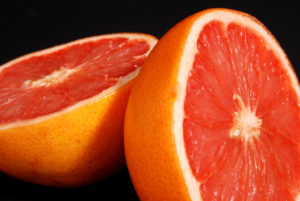 11. Botanically, grapefruit wasn’t distinguished from the pomelo until the 1830s, when it was given the name Citrus paradisi.

12. An early pioneer in the American citrus industry was Kimball Atwood, a wealthy entrepreneur who founded the Atwood Grapefruit Company in the late 19th century. The Atwood Grove became the biggest grapefruit grove in the world, with a yearly output of 80,000 boxes of fruit.

13. Grapefruit is 92% water, giving it one of the highest water contents of any fruit.

14. Several studies have shown that people who eat half a fresh grapefruit or drink grapefruit juice before each meal, love more weight than people who don’t.

15. The pith in grapefruit is very rich in antioxidants and nutrients. It’s also full of soluble fiber, which can help you feel fuller and impact your glucose reactions.

16. In just half a grapefruit there’s about 60% of daily value of vitamin C. That’s more than half of your daily need in less than a cup.

17. The Star Ruby is the darkest grapefruit of the red varieties. Developed from an irradiated Hudson grapefruit, it has found limited commercial success because it’s more difficult to grow than other varieties. 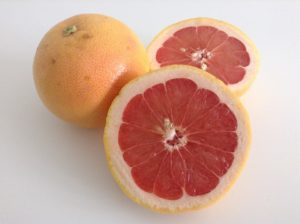 18. Grapefruit comes in many varieties. The most popular varieties currently cultivated are red, white, and pink hues, referring to the internal pulp color of the fruit.

19. Grapefruit and grapefruit juice has been found to interact with numerous drugs and in many cases, to result in adverse direct or side effects if dosage isn’t carefully adjusted.

20. In Costa Rica, especially in Atenas, grapefruit are often cooked to remove their sourness, rendering them as sweets. They’re also stuffed with dulce de leche, making them into a dessert called toronja rellena.

21. In Haiti, grapefruit is used primarily for its juice, but also is used to make jam.

22. Grapefruit has been investigated in cancer medicine phramacodynamics. Its inhibiting effect on the metabolism of some drugs may allow smaller doses to be used, which can help to reduce costs.

23. Grapefruit juice contains about half the citric acid of lime or lemon juice and about two and a half times the amount of citric acid found in orange juice. 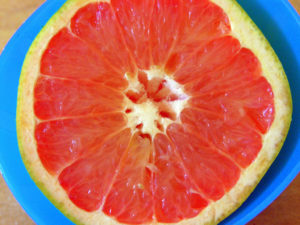 24. There is a popular myth that grapefruits contain high amounts of spermidine, a simply polyamine that may be related to aging. The myth probably relies on the confusion between spermidine and putrescine. While citrus fruits have high amounts of putrescine, they have very little spermidine.

25. A single grapefruit tree can produce over 1,500 pounds of fruit.

26. In 1993, the red grapefruit became the official fruit of Texas.