1. The movie was written by Robert Buckner and Edmund Joseph, and directed by Michael Curtiz.

2. According to the special edition DVD, significant and uncredited improvements were made to the script by the famous “script doctors,” twin brothers Julius J. Epstein and Philip G. Epstein.

3. In 1993, Yankee Doodle Dandy was selected for preservation in the United States National Film Registry by the Library of Congress as being, “culturally, historically or aesthetically significant.”

4. Walking down the stairs at the White House, James Cagney goes into a tap dance. According to TCM, that was completely ab-libbed. 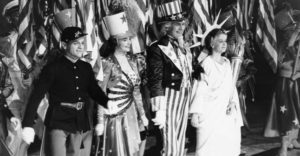 7. According to his biography, the rather stiff-legged dancing style used by James Cagney in this movie isn’t his own. He copied George M. Cohan’s style to make the movie more accurate.

8. Yankee Doodle Dandy marks the first time a living U.S. President was depicted in a movie.

9. Many facts were changed or ignored to add to the feel of the movie. For example, the real George M. Cohan was married twice, and although his second wife’s middle name was Mary, she went by her first name, Agnes. In fact, the movie deviated so far from the truth that, following the premiere, the real George M. Cohan commented, “It was a good movie. Who was it about?”

10. James Cagney broke a rib while filming a dance scene, but continued dancing until it was completed.

11. Yankee Doodle Dandy marks the first time that James Cagney attended the premiere of one of his own movies. 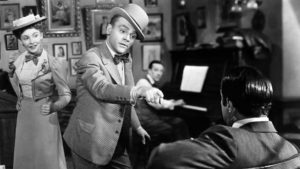 13. Despite failing health, the real George M. Cohan acted briefly as a consultant on the movie. He lived long enough to see the finished result and approved wholeheartedly of James Cagney’s depiction of himself.

14. James Cagney hated working with character actor S.Z. Sakall, who felt upstaged him at every turn. He complained to director Michael Curtiz about him but Curtiz took no action, as he had great respect for Sakall, who was once Hungary’s leading actor. Cagney refused to work with Sakall again.

15. Joan Leslie portrays Mary Cohan, aging from 18 to 57 throughout proceedings. Leslie turned 17 during the production of the movie. The fact that she was still attending school during production caused many delays.

17. In a voice-over, James Cagney, as George M. Cohan, says, “I was a good Democrat, even in those days.” In reality, Cohan was a lifelong ultra-conservative Republican who despised President Franklin D. Roosevelt. 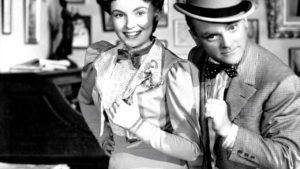 18. Choreographer Johnny Boyle broke his ankle rehearsing the opening song and dance number. This effectively scuttled the rest of his career.

19. In the movie, George M. Cohan writes a drama called “Popularity,” which was a failure. Following World War I, he rewrote parts of it, added music, and released it under the title of “Little Nelly Kelly,” which became a huge hit.

20. Julius J. Epstein and Philip G. Epstein did an uncredited rewrite on the script at the person request of James Cagney.

21. Future director Don Siegel was responsible for putting together the many montages that appear throughout the movie.

22. James Cagney won his first and only Oscar for Yankee Doodle Dandy.

23. The movie began production without a completed script and was continually requiring rewrites. 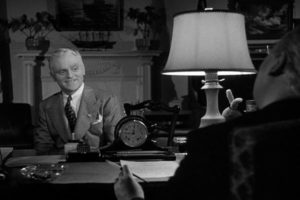 24. Fred Astaire was first offered the leading role but turned it down.

25. Yankee Doodle Dandy was the very first black and white movie to be colorized using a controversial computer applied process. Despite widespread opposition to the practice by many film aficionados, stars and directors, the movie won over a sizable section of the public on its re-release.

27. Second unit director Seymour Felix was removed from the production because he didn’t get on with lead director Michael Curtiz. He was replaced by LeRoy Prinz.