Ghost in the Shell is a 2017 American science fiction movie directed by Rupert Sanders and written by Jamie Moss, William Wheeler and Ehren Kruger, based on the Japanese manga of the same name by Masamune Shirow. Take a look below for 27 more fun and interesting facts about Ghost in the Shell.

2. Set in a near future when the line between humans and robots is blurring, the plot follows the Major, a cyborg supersoldier who investigates her past.

4. The movie grossed $169 million worldwide against a production budget of $110 million, and is considered a box office bomb.

5. Several scenes in the movie are exact in visual comparison to the original Ghost in the Shell anime. Some parts shown in the city are even exact re-creations of the original artwork. 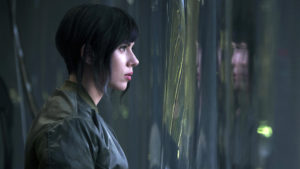 6. In an establishing shot of the city, a Pan Am advert can be seen in the top left. The bankrupt airlines inclusion is a reference to Blade Runner, which also had an in-film advert for them.

7. The Geisha robots wore full head masks created by Weta Workshop and modeled after Japanese actress Rila Fukushima. The opening or “exploding” of the geishas’ heads was mechanical rather than CGI.

8. Mamoru Oshii, the Japanese director of the original Ghost in the Shell anime, has spoken out against the whitewashing controversy surrounding Scarlett Johansson playing Major despite not being Japanese. He gave her his blessing and said, “I believe having Scarlett play Motoko was the best possible casting for this movie.”

9. Although the movie was shot in New Zealand and the name of the setting is never mentioned, the city depicted is a highly digitized Hong Kong. For example, the dirty slum with narrow housing was Sham Shui Po and the splendid background when Major is in the boat was Hong Kong Island’s Central.

10. The scene where the Major takes the prostitute Lia up to a room to examine her for evidence of humanity was initially longer, and actually got more intimate between the two. It was cut short during post-production.

11. The scene at the Yakuza bar where Batou drinks a beer served by a bartender with a mechanized arm is a homage to Ratz the bartender in “Neuromancer” by William Gibson. This book is considered a heavy influence on cyberpunk. 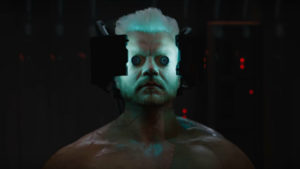 12. Scarlett Johansson doesn’t wear a wig in the movie and it’s her own hair which she dyed black and blue for the movie.

14. Ladriya, the only other female member of Public Security Section 9, is the only character that does not exist in any previous works of Ghost in the Shell and was created from scratch for the movie.

15. The Major is referred to several times as a “miracle.” Her anglicized name in the movie is “Mira Killian,” a tribute to the idea that she’s a “miracle” of a techno-human hybridization and a testament to the greatness of the human spirit.

16. The tips of Major’s hair are dyed a blue color which glows a purple shade during darker scenes. This is an intentional homage to the Major’s hair color, which was purple, in the Stand Alone Complex TV series.

17. The body suit that Scarlett Johansson wears in the movie as Major’s synthetic body, known as the Thermosuit, is made out of silicone.

18. The character of Dr. Ouelet was originally written as a male character, but was rewritten as female to accommodate Juliette Binoche who impressed the filmmakers at her audition. Rupert Sanders was very enthusiastic about this because he liked the idea of adding some maternity to the character. 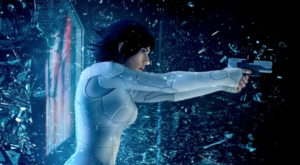 19. Dancers and stuntwomen were cast as the robotic Geisha. Their flexible and acrobatic movements provided the required disturbing contortions of the Geisha.

20. Margot Robbie was considered for the role of Major.

21. After watching Takeshi Kitano perform in front of him on the set, Pilou Asbaek was so impressed by his acting skills he decided that he was one of his new favorite actors.

23. Batou had a specially designed shotgun for the movie that was created with a futuristic look to it, but problems happened on the set when the gun kept jamming and refusing to fire rounds causing the actor Pilou Asbaek to mess up several takes. Rupert Sanders encouraged him to continue filming as normal even if the gun wouldn’t work properly.

24. Matthias Schoenaerts was considered for the role of Batou.

25. All of the actors playing the Public Security Section 9 officers had to train for several months together with stunt coordinators on how to perform hand to hand combat and how to handle guns and knives.

26. Sam Riles and Jim Sturgess were both in talks for the role of Kuze.

27. There is a scene in a few trailers where a chapel containing several monks are seen praying, two of these senior monks were played by Tricky and Andrew Ng though all of their scenes were cut during post-production.