2. The plot of The Scorch Trials takes place immediately after the previous installment, with Thomas and his fellow Gladers, who have just escaped from the facilities of the powerful W.C.K.D., which had imprisoned them.

3. The movie was a commercial success, grossing $30.3 million on its opening weekend, making it the ninth highest grossing debut in September.

4. Maze Runner: The Scorch Trials went to the number one spot at the box office during its opening weekend, and has grossed $312 million worldwide. 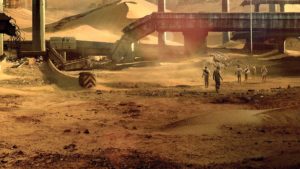 5. Originally, the studio had a “wait and see” policy for greenlighting the movie depending on how the first movie did. However, they decided two weeks before the premier of the first movie to go ahead and greenlight The Scorch trials anyway as the publicity and reviews were overwhelmingly good.

6. Wes Ball says that the movie diverges from the book a little bit, but gets back on track in the third installment titled The Death Cure.

7. In the books, there was only one other maze with all girls and Aris. In the movie, there were multiple mazes in comparison to the two in the books.

8. The way the Gladers escaped W.C.K.D. headquarters was very different from the book. In the book, they went through a Flat Trans and must walk through a very dark tunnel with silver goops attacking them. In the movie, this never happened.

9. Australian actress Adelaide Kane was fancasted to play the role of Brenda but couldn’t get the part due to scheduling conflicts.

10. When Brenda and Thomas are underneath the building together, they come across the undead. When the undead awake, an alpha of some sort emerges behind them. In the award winning PlayStation game, “The Last of Us,” a Clicker, within the game, looks exactly like the alpha from The Scorch Trials. 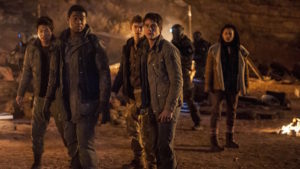 11. Hailee Steinfeld was up for the role of Brenda.

12. Despite prominent billing, Nathalie Emmanuel doesn’t appear until three quarters of the way through the movie.

13. Giancarlo Esposito’s character “Jorge” often calls people “hermano,” which is Spanish for “brother,” which he often says in the book.

14. Patricia Clarkson and Lili Taylor both appeared in Six Feet Under.

15. Brenda mentions that her brother was taken away from her and that his name was George. In the Maze Runner, Thomas stops at a grave with the name George on the tombstone. It’s safe to assume that the grave belonged to Brenda’s brother.

16. In the books, the Gladers refer to Janson as the Rat-Man. It isn’t until The Death Cure that we learn Janson’s real name.

17. Brenda is immune in the book, while in the movie she isn’t. She was infected when she was bitten by a Crank. 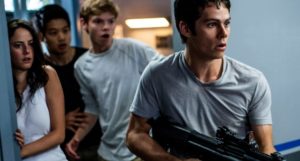 18. As seen in the casting, Brenda is added as a new character and Teresa becomes disliked by many characters, maybe even Thomas.

19. In the book, Winston is an Immune, but in the movie, he died because his stomach was scratched by a Crank.

20. In the beginning of the movie, an eyeless Crank woman is pointed out by a few protagonists while terrorizing the Gladers. Near the end of the movie, Teresa tells Thomas that her mother clawed her own eyes out after getting the Flare but it isn’t her mother, because her mother died.

21. There were a total of 8 Gladers who escaped the facility where they were brought after being rescued from W.C.K.D. Aris from another Maze, Thomas, Teresa, Newt, Minho, Frypan, Winston and an unidentified Glader from Thomas’ maze. They had their first encounter with Cranks in an abandoned mall. The unidentified Glader from their group couldn’t be seen anymore while they try to get away from the abandoned mall. No explanation throughout the movie was made about him. 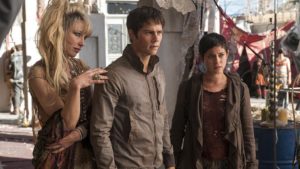 23. In the book, Brenda has long brown hair, but in the movie, she has short black hair.

25. The main criticisms of the movie were its narrative, particularly its changes from the source material and the lack of any character development.

26. The movie was released in Barco’s multi-screen immersive movie format Barco Escape in across 25 countries with approximately 20 minutes of the movie converted into the format.

27. The soundtrack was composed by John Paesano.