1. Set in 1977 Los Angeles, the movie focuses on a private investigator and a tough enforcer who team up to investigate the disappearance of a teenage girl.

2. The movie received positive reviews from critics and grossed $62 million against its $50 million budget.

3. The project was initially proposed as a television series but was re-tooled as a movie after the pilot seemed to be going nowhere.

4. One of the movie’s nods to The Rockford Files is the yellow pages ad for Holland March’s detective agency. It’s almost a complete copy of the ad used for Jim Rockford. Like Jim Rockford, March keeps his gun in a cookie jar. 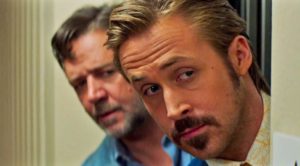 7. The movie opens with the mid 1970s Warner Brothers logo.

9. Principal talents Russell Crowe and Ryan Gosling were both child actors who dropped out of high school to pursue their careers, and never had formal training in acting.

11. At the beginning, when Jackson Healy is learning a new word, equanimity, while feeding his fish and reciting it to himself to memorize it, the scene is exactly like a scene from the Asia-American movie Better Luck Tomorrow; even the word is the same. 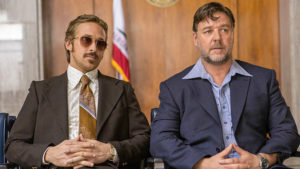 12. The dialogue between the bartender and the detectives, “He’ll stop doing it. Do what,” is the same line from Iron Man 3 when Rhodie and Tony interrogated Mandarin. Both movies were directed by Shane Black.

15. The party scene at Sid Shattuck’s place is actually the Atlanta home of Hip-Hop producer Dallas Austin. The home was also featured on MTV Cribs.

16. The toast which ends the movie, “To the birds!”, is delivered by two men with bird-based surnames: Crowe and Gosling.

17. The character John Boy has the same mole as his namesake on The Waltons. 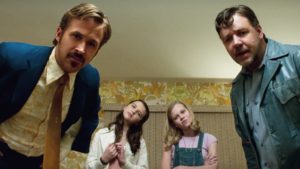 19. When Healey is fighting the older guy at Sid’s house party, Healey delivers a punch combination exactly like the combination Maximus uses on Commodus in Gladiator. Both Healey and Maximus are played by Russell Crowe.

22. If you look closely in the background of the traffic scene, you can spot the black van that hit “Blue Face” and it’s driven by Shane Black in a classic Hitchcockian cameo.

23. The Nice Guys is the second movie that Jack Kilmer and Margaret Qualley have done together. The first one was Palo Alto.

24. The Nice Guys reunited Keith David and Russell Crowe, who previously appeared together in The Quick and the Dead. 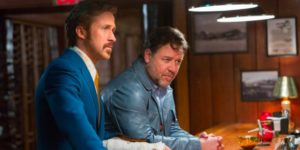 25. The body of Sid Shattuck is “played” by Robert Downey Jr., who’s wearing a fake beard, in an uncredited cameo.

26. The take with Ryan Gosling sitting against the tree next to the body of Sid Shattuck is an homage to Lou Costello, who specialized in long takes where something, such as the Mummy or Frankenstein’s monster, scared him so badly he couldn’t make a sound, but eventually managed to yell his partner’s name.

27. When Jackson, Holland and Holly are in a cab surrounded by traffic after the big shot against John Boy at Holland’s house, the black van that hit “Blue Face” can be seen next to the cab also stuck in traffic.